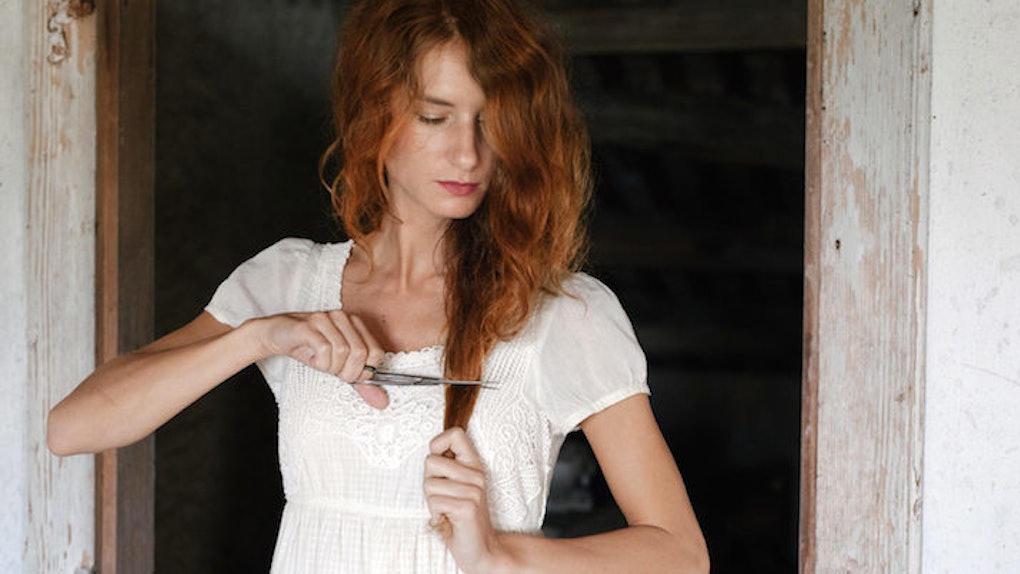 They say that when we fail to plan, we plan to fail. The worst happens when things don’t go according to plan.

That’s how it felt for me, anyway. I fell in love and then I lost that love, and there was nothing planned about it.

Even when I knew it was time to abort mission, I didn’t concoct an escape plan. I just felt my way through the dark.

He left me alone with just myself and my thoughts, and he couldn’t have done anything more dangerous.

I was lost, but I needed to be found again. Everything was different but somehow still the same. It was just another sweltering summer in New York. Change was happening to me, but I wanted to happen to change.

On one of those hot summer days, I happened to be walking down the sidewalk. Sweat collected around the nape of my neck, and it continued to collect until even breathing became hard.

My hair, which had trickled down to my belly button ever since I was a teenage girl, was desperately trying to tell me something: “I’ve had it.”

I heard it. There was a hole-in-the-wall barber shop on the corner that smelled like fish and cigarettes; its light-up sign was only half-lit.

I went down the steps, took a deep breath and opened the door. I don’t know if it was the heat on the streets or the fire in my head, but I followed my heart.

I told the hairdresser I wanted my Pocahontas locks gone.

She stared at me. “But you have such beautiful hair!”

She hesitatingly sat me down and went in for the kill.

In the hairdresser’s chair, I felt the incipient fear build as I looked my mirror-self in the eye. But as Balzac so poignantly once said, “Our greatest fears lie in anticipation.” Turns out that he was right -- and I was wrong. The worst things don’t happen when we don’t go according to plan. The best things happen because we don’t go according to plan.

When she was done, my hair hit my ears. I was relieved that I didn’t look like me anymore.

Outside, my traipse transformed into a skip. I actually had an oomph in my step, and in that moment, I remembered that I’d forgotten what oomph felt like. Remembering was all thanks to my Pocahontas-turned-pixie cut.

1. My other features became featured.

I began to notice all the things I never really noticed before: My imperfect eyebrows, the little gap between my two front teeth, the way my ears unequivocally froze into two ugly ice sculptures in the winter.

I learned to love the little things I used to perceive as flaws.

2. I couldn’t hide behind what wasn’t there.

It’s only natural to run from vulnerability. We create shields with the intention of becoming impervious to all the sh*t life inevitably throws our way. I hid behind my long, lazy locks.

After I donated them, I asked myself what exactly it was I’d been hiding from.

3. I placed more value on my personality than I did my looks.

Some days will be so bad for your hair that all the clips and beanies and mousse in the world won’t do a thing. But that’s okay.

I actually found myself refocusing on all the other good things I offered the world.

4. The weight of the world was no longer on my shoulders.

5. I began to attract men who appreciate a “different” aesthetic.

Everyone likes long hair. Betches love it. My ex-old-lady-neighbor loved it. Oh, and dudes? Ask any guy, and he’ll tell you he “prefers” women who have long hair.

But I didn’t want to attract a boy; I wanted to attract a man. Boys stick to their uncouth boyishness, and men live lives of admirable open-mindedness.

6. My life untangled itself.

Who needs all those ties and bands?

I cleansed myself of the toxins that kept me from being my most natural self.

After the cleanse, I learned how to stick with my new, poison-free diet.

8. I killed my habit by cutting my hair.

The hanging hair was just dead weight, and so was my former lover. You can’t fix what’s already dead.

9. I learned conditioner doesn’t get to the root of the problem.

It seems we always try to make something -- a loveless relationship, a burning friendship, a dysfunctional attitude -- better, rather than scrap it entirely and start over. It’s just easier that way.

But sometimes we shouldn’t improve; we should simply start anew.

10. All of life's other layers took precedence.

Superficiality only goes so far, and I stopped paying attention to it. I began to live a life with meaning.

11. When I chopped the gunk, I ended up with more funk.

Having short hair meant having to show more personality in the way I dressed. I couldn’t believe I ever shied away from chunky bead necklaces and cutesy hair bows.

I tapped into my edge, the one I realized I’d been suppressing all along.

12. And with no split ends, you begin again.

Starting over is scary; I used to run from it. Now I run at new beginnings with open arms.