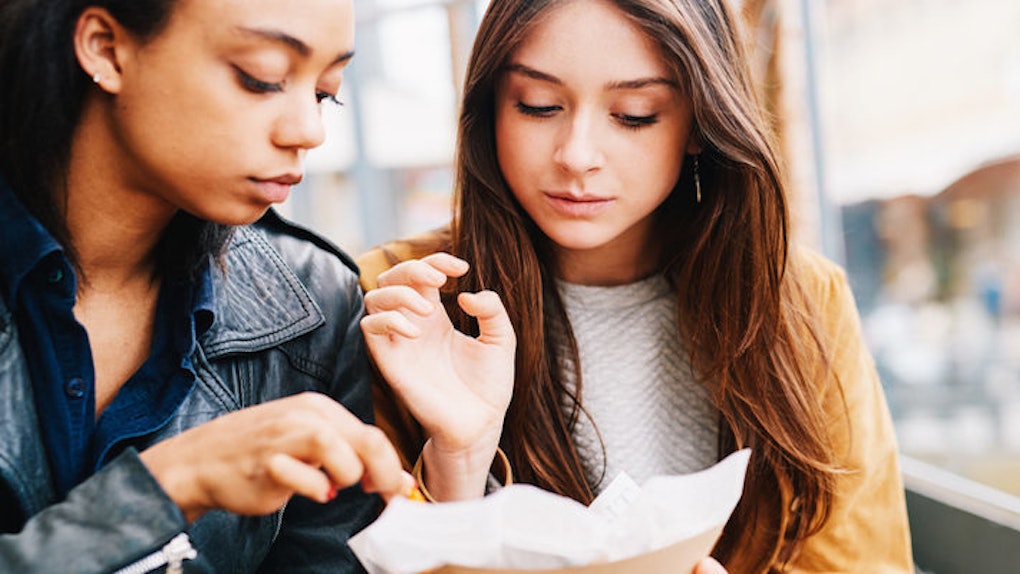 Things I Don't Understand About People Who Eat In Moderation

I can't eat in moderation.

Once upon a time, I was able to. But then I discovered the inherent magic of peanut butter-filled brownies, and I was never the same. Damn you, peanut butter brownies.

WTF does "eating in moderation" mean, anyway? To me, eating in moderation means listening to your body, because our bodies constantly send us signals about what they want to be fed. I'm tired, so I want sugar. I just came back from the gym, so I'd love a steak. I'm high AF, so I need to down a gallon of water ... oh, and some Goldfish while I'm at it. When you listen to your body, you mix healthy stuff with non-healthy stuff in a totally natural way. In quite literal terms, you are moderating your food intake.

But other people -- namely fitness magazines, nutritionists and bougie food snobs -- would disagree. They'd say eating in moderation means eating a bowl of mixed greens and tuna for lunch and indulging in one slice of pizza for dinner. Moderation means not eating another slice of pizza until the following week, because eating any more pizza than that wouldn't be considered “healthy living.”

Because eating in moderation is a conundrum and a half, I've kind of just made up my own rules. I personally try to stay away from sweets altogether, because sweets are my vicious little vice. If I'm not staying away from them, though, I'm pouncing on them ravenously -- just as I do my f*ck buddy after we've had one drink too many and I can't stop myself. I have ZERO self-control.

I've never understood people who eat in moderation. Like, what do they think about when they eat salad? Are their salad thoughts good thoughts? Because mine aren't. All I'm thinking when I eat that f*cking salad is, I'd rather have anything other than crispy-ass lettuce and squishy-ass tomatoes in my mouth right now. I don't care if there's protein in that thing; it is boring and tasteless and uninspiring.

How's a gal supposed to live a life eating salads when chocolate is, like, eight thousand times better? ALSO, have you ever actually watched someone down a salad? Why does it take two hours to eat one? People stab at it sadly and relentlessly, the way a seagull picks at trash at the beach. Food shouldn't take that long to eat. If you can look me in the eye and tell me you genuinely love salad, you're either a freak of nature or a horrible liar.

And don't even get me started on my restaurant rules. I don't touch the bread basket. If I do, I'll eat the entire thing. One Friday night, I was at a fancy-schmancy restaurant with my girlfriend, and I reached for ONE piece of bread and ONE slab of butter. I ended up with a butt-load of bread crumbs left on my plate. And on my clothes.

“Whoa there, girl. Hungry much?" my friend said, a judgmental tone in her voice.

Honestly, I wasn't even that hungry. The bread was just too tasty. The "It's just too good!" struggle is REAL.

My feelings about chocolate cake for dessert are similar. The fact that portioned dessert is even a thing blows my mind. Why would I have one slice of cake when I could have an entire cake? Why -- hell, how -- does anyone ever have just one bite of something so good?! Sugar has a way of pulling you in and keeping you right where it wants you. Sugar is malicious like that.

On a night out with my sister, I watched her lick whipped mousse off her fork, almost cruelly, as she proclaimed, “Oh my God, this is soooo good." After her third bite of cake, she put the fork down. I looked at her in awe.

“You should try it, Sheen!” she said.

This time, I abstained. I had learned my lesson. I knew that if I started, I wouldn't be able to stop. "Eh, no thanks," I said, miserable to be missing out.

The problem with depriving yourself, as any real depriver knows, is that it doesn't work. After I had dinner with my sister, I went home and devoured three-quarters of a Carvel ice cream cake in one sitting. It was way more than I'd eat in a dessert-sized portion, so I screwed myself over on that one. I woke up with a sodium hangover and a desire to kill myself.

Still, I try what doesn't work. In a valiant attempt to stay nutritious and ~fit~, my co-worker Zara and I order the same thing for lunch every Friday: bland-ass grilled chicken with asparagus. There is no sauce on this chicken. There are also no carbs that come with this meal.

Is it filling? Yes. Straight protein usually is. Is it satisfying? No. Straight protein usually is not. And when I'm eating this less-than-desirable meal, I'm thinking, OK, this is definitely a fitspo-approved meal, so I must be living life right. Right? But it doesn't feel that way, because I'll usually follow that meal up with a heaping of something chocolate-y and nougat-y and bigger than my head.

Possibly the toughest struggle of being someone who can't eat in moderation, though, is getting drunk or stoned and having to exhibit some semblance of willpower. Because once we've got something in our system, there's no telling what we'll do. We use being f*cked up as an excuse to let all hell break loose and step outside our usually ~refined~ selves. High Sheena will eat anything within a 60-mile radius, including you.

So, who are you? Are you a DEPRIVER or a MODERATOR? If you're the latter, I seriously envy you. How you're able to eat fatty food and still appreciate green juices is beyond me. If I had it my way, I'd probably never drink a green juice in my life. The moral of the story is that diets suck, green juices suck, and eating in moderation is hard.

Then again, maybe if salads didn't exist, I'd never be able to understand why chocolate tastes as incredible as it does. Hmmm.