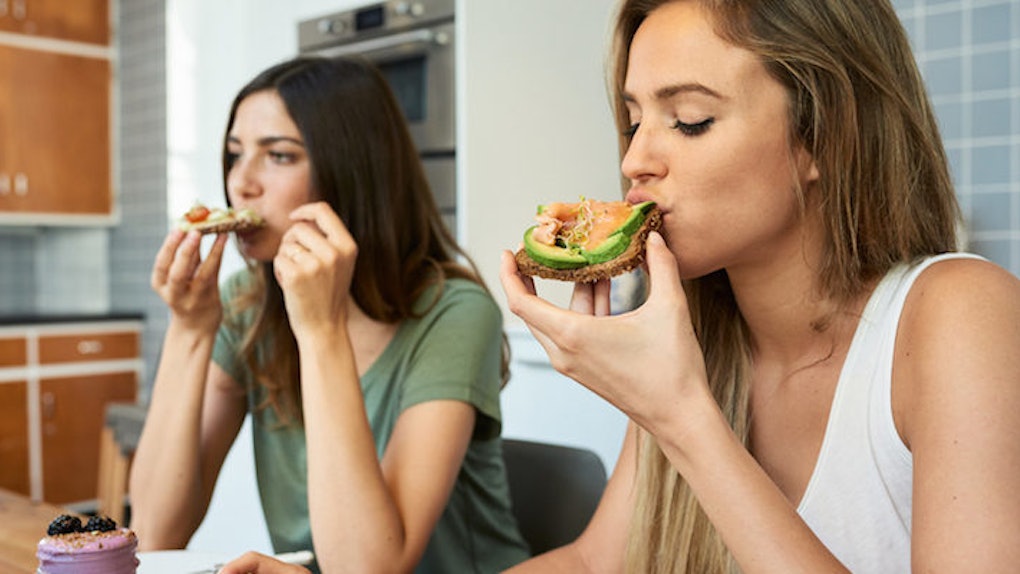 When it comes to healthy habits, some studies make me wonder if we're losing the plot.

A recent study by French researchers had participants eat food while receiving a stream of aromas via tubes in their noses.

Turns out, tampering with participants' sense of smell totally tricked their brains while they ate healthy food! The researchers think this result is positive, but I'm skeptical.

It doesn't come as a surprise that you can trick your brain into thinking something is a dessert based on how it smells. Smell and taste are directly connected. If something smells bad or off to you, you're less likely to like how it tastes.

Thierry Thomas-Danguin, PhD from the Center for Taste and Feeding Behavior in Dijon, France explained why technology to change the smell of food would be helpful, especially for those with obesity. He said,

Most consumers know that they should be eating more healthful foods made with reduced amounts of fat, sugar and salt, but this is problematic because these are the very ingredients that make many of the foods we like taste so delicious. Based on our lab work, we've come to believe that aromas can help compensate for the reduction of fat, sugar and salt in healthful foods and make them more appealing to consumers.

This the part I was talking about when I said we're losing the plot.

Your taste buds are trained to like the food you eat consistently. So, if you constantly chow down on Big Macs, eating a salad probably won't taste good.

And for someone who eats garbage, it's possible to train your palate to crave healthy food. It just takes time.

When you're eating fruits and vegetables frequently, you won't need the healthy stuff to taste better because it will already taste good to you. There shouldn't be anything to improve, in terms of taste.

Based on the study, a nasal spray is being developed that people could use to alter the way their brain perceives the taste of healthy foods.

To me, this method is totally backwards. I think the researchers, in this case, were trying to solve the pressing problem of obesity from the wrong angle.

Why would anyone want a celery stick to taste like a piece of cheesecake?

Citations: The SMELL that could revolutionise dieting: Chemicals can fool the brain into thinking healthy snacks are loaded with sugar (Daily Mail)