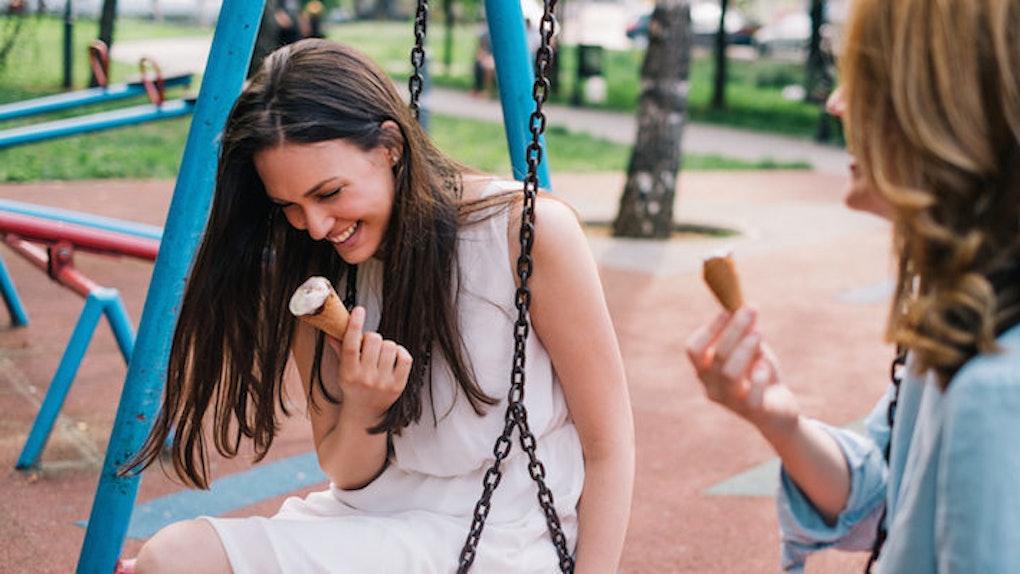 When you're born, you're like a kitten, blind to life's hardships. Adults keep things from you; they shield you from later life's complications. And when you do finally encounter them, you just want to go back to the blissful ignorance of your youth.

But when we try to return to simpler times, we find that we're not allowed. Society frowns on it; other people think that regressing means being immature or cowardly.

But it turns out that people who are young at heart have stronger brains. Various studies have found that adults who act like children have healthier minds and less stress.

So while others may criticize you for seeming childish or immature, what they don't know is that you're just more clever than the rest of the population. We need to stop denying ourselves the freedoms that children enjoy every day.

Embrace your inner child. In the name of science -- and for the sake of your mental health -- bring back the crayons, board games and snacks!

Coloring relieves stress (and adult coloring books are on the rise).

When you were a child, you colored pictures of Barney and Pokémon to entertain yourself.

As an adult, you color to focus your mind and dissolve your concerns. Coloring is distracting, but it's also a very useful stress reliever. And while circumstances may be out of your hands, a crayon is not.

With just a few crayons or markers, you can maintain a sense of control over at least one thing in your life -- and color outside the lines, if you so choose.

According to the Huffington Post, coloring "generates wellness, quietness and also stimulates brain areas related to motor skills, the senses and creativity."

Coloring is known to be a destressor. It's so therapeutic that it was first used as a relaxation technique by Carl G. Jüng in the early 20th century.

It's easy to see why: As you fill in the blank areas of a page, you allow your mind to go blank, and you reduce time spent overthinking or torturing yourself with what-if scenarios.

The act of coloring might even bring you back into your childhood and remind you of happier times. It's no surprise that publishers and booksellers have started marketing coloring books for adults.

When you were little, you probably napped a lot. But since sleep restores your brain, you should probably continue to take naps.

According to the National Sleep Foundation, "naps can restore alertness, enhance performance and reduce mistakes and accidents."

NPR reports that when you snooze, your body regenerates cells and rids of all the toxins that have built up while awake. The process is crucial to your mind's health.

In a sense, your bed is like a checkpoint where your body saves new information and memories. Napping also allows you to feel more relaxed, less fatigued and have improved memory, according to the Mayo Clinic.

Games may prevent Alzheimer's and dementia.

Board games were all the rage when you were young. But they don't have to live in the past.

Playing games helps you stay mentally active when you're much older. TIME magazine claims exercising your brain "slows cognitive decline." By stimulating your brain with games that activate your imagination -- like cards, Legos and crossword puzzles -- you can decrease your chances of developing Alzheimer's or dementia.

Children tend to have pretty consistent eating habits -- their parents make sure of that. But food is just as important for adults to monitor themselves.

Make an effort to pause during the workday to refuel.

You can't run a car without gas. What you eat helps your body and brain to function.

A 2012 study published in the Canadian Journal of Psychiatry found that the nutrients patients ate "consistently and reliably" impacted their physical and mental health (A well-known example of food-as-medicine is that chocolate releases endorphins -- also known as the "happy chemicals").

Eating healthy foods has even been linked to a lower risk of mental health issues.

Regular exercise can be as helpful as antidepressants.

I'm going to bet that gym was your favorite "class" in school. You probably unfroze your friends in freeze tag and hurled bouncy balls at your unsuspecting classmates' faces in dodgeball (and then sat on the bleachers as a penalty).

Basically, you were constantly in motion. And you'd probably benefit from doing similar exercises as an adult.

One study has shown that antidepressants are less effective than exercise in fighting depression. And exercising has also been proven to increase brain function and enhance neurogenesis (the production of new brain cells).

And -- finally -- using your imagination makes you more empathetic.

Albert Einstein was right when he said that "imagination is more important than knowledge." Imagination isn't only important in childhood. You may no longer have imaginary friends, but you can use your imagination to empathize with friends who are feeling low.

In her viral 2008 Harvard commencement speech, J.K. Rowling stressed the importance of imagination:

Imagination is not only the uniquely human capacity to envision that which is not, and, therefore, the foundation of all invention and innovation. In its arguably most transformative and revelatory capacity, it is the power that enables us to empathize with humans whose experiences we have never shared.

In this fashion, creative thinking allows you to walk in someone else's shoes without ever actually having to put them on. When you imagine your friends' feelings, you can truly see things from their perspective and feel what they're feeling.

Another way to use your imagination is out-of-the-box thinking. We like to push the envelope in our careers and lives. Don't forget that Disney, Pixar and Dreamworks movies are made by adults.

Slides did not magically appear in the Google offices; they're there because one designer was thinking creatively.

Without this type of thinking, the world would be a boring place.

If Walt Disney and J.K. Rowling did not allow their minds to wander, the world would have never been introduced to Mickey or Harry Potter because they simply would not exist.