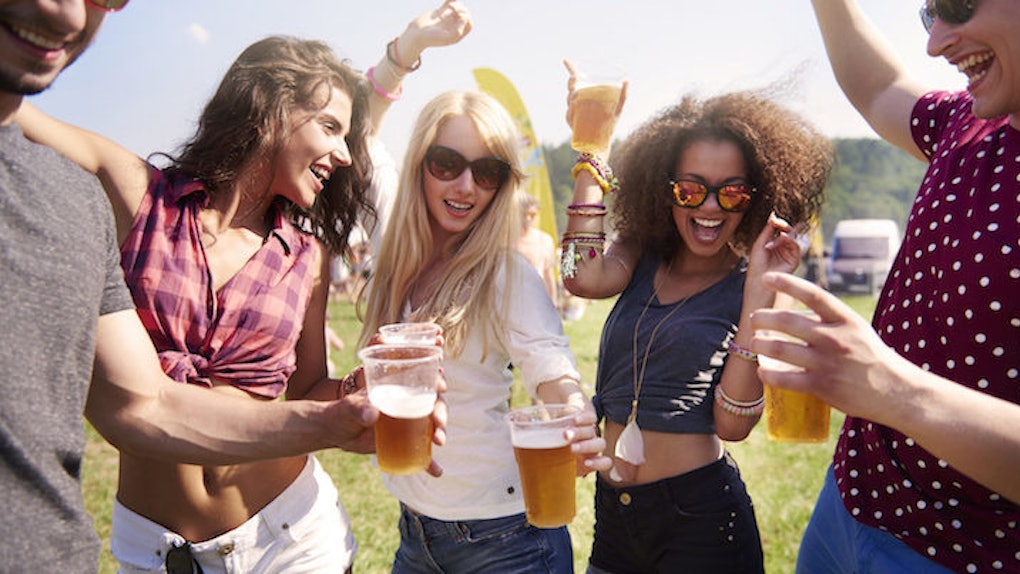 It's me, again, your festival-lovin' homegirl here to give you some key advice on how to survive your weekend getaway without ending up in a medical tent.

Let's face it, accidents are bound to happen once you've entered festival territory, especially when you're living in a world of tents, booze and crowds.

You need to be prepared. Trust me, I know from experience.

I've learned the hard way people won't always be there to catch you mid crowd-surf, and you should check the grass for poison ivy before you lie in it -- but I won't digress.

There is one problem you can easily avoid at a festival, though.

As silly as it sounds, a lot of festival-goers forget how important it is to stay hydrated throughout the weekend.

When you're boppin' around the campground, meeting new people, dancing, having one drink... then two... then three, it's hard to realize when it's time to take a sip of water.

Plus, most festivals happen in the summer, and it's usually hot AF. So listen closely, my friends. I GOT 'CHU.

Here are a few key hacks to help you conquer dehydration without missing a beat.

1. Drink water in between the boozy bevs.

Although you might be under the impression sipping on an ice cold beer in the blazin' hot sun is hydration enough, don't be fooled. It's not. *Sigh*

According to Mayo Clinic, it's best to have a glass of water in between each alcoholic beverage to avoid dehydration. Plus, you'll be pleasantly surprised when you don't wake up with a hangover in the morning.

FYI, waking up hungover in a 95-degree tent with all of your friends is NOT FUN. So please, I beg of you, don't forget the water.

Depending on which festival you're at, you can probably find a nearby area to run to if you need to escape the sun. In fact, most festivals nowadays have cooling areas, like the charging tents at Firefly or the mist tents at Bonnaroo.

Believe me, after a spending over eight hours in the heat, you're going to want a shady spot to recharge your body so you're ready for the night ahead. The LAST thing you want is a headache during your favorite headliner.

3. Carry water around with you.

This one is tricky because a lot of festivals won't let you carry your own water through the front gates -- which pretty much forces you to buy water bottles once you get in. UGH.

To avoid the unneeded cash flow, make sure you bring your own reusable water bottle with you for the weekend. Once you get into the festival, you'll be able to refill it at water stations any time you start feeling drowsy.

Another alternative for anyone who doesn't feel like carrying a water bottle around all day is a hydration backpack. It essentially turns you into a water-bearing, camel-like human, and it's a total game changer.

4. Slow down on the caffeine.

This sounds terrible, I know, because the last thing you want to be at a festival is tired.

Don't fret! This doesn't mean you have to ditch the caffeine completely. It's totally fine to have a cup of coffee in the morning to kick-start your day, but I wouldn't guzzle down a 24-oz whenever you're feeling drowsy.

According to Huffington Post, coffee will only dehydrate you if you overdo it. So when you feel like you've hit a low, try replacing coffee with a different energizing bev', like Vitamin Water or OJ.

Choosing the right outfits for a music festival is a pretty HUGE deal because it's just as much about the fashion as it is about the comfort.

In order to keep cool and avoid dehydration, you need to make sure you've got the right accessories in your wardrobe. Big floppy hats and sunglasses will usually do the trick. Plus, they're super cute and you'll be able to beat dehydration in style.