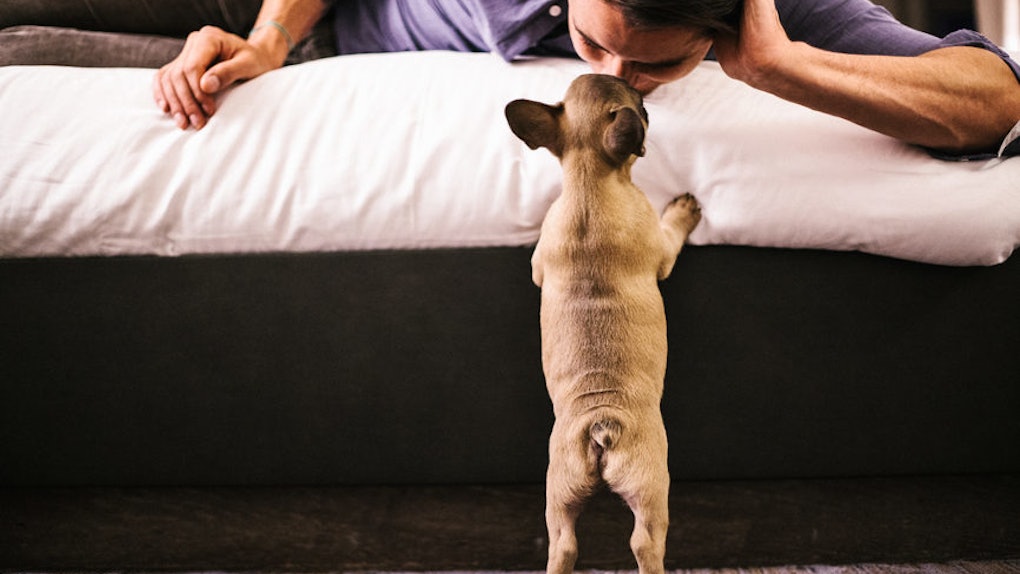 I spent my Fourth of July living my best life: getting showered with love by a morbidly obese beagle named Pumba, who had farts that would easily clear out anyone within a 10-mile radius.

In my experience, dog love comes in a variety of forms. There's the tail-wagging, wiggly butt kind, the “OMG I CAN'T EVEN SIT STILL, LET ME JUMP INTO YOUR ARMS” kind and the borderline freaky, “Let me stare into your soul while I take a shit” kind of love, which my dog personally subscribes to.

My favorite, however, is the “lick your face off” kind of love. That kind of love is so exclusive and special that there is absolutely no other being on earth who would get even remotely close to that kind of action. Sorry, guy I'm going on a date with later tonight, but my lovin' is reserved for a Pomeranian.

Unfortunately, that kind of love can also be life-threatening. CBS reports that after getting a kiss from her pet Italian greyhound, a 70-year-old woman from the UK was hospitalized when she developed slurred speech and became unresponsive. After being taken to the hospital, she was diagnosed with sepsis (aka blood poisoning), which gave her organ failure.

After several tests, she was found to have Capnocytophaga canimorsus: a bacterium found in the mouths of dogs and cats. The infection initially comes off as a variety of illnesses, Dr. Bruce Farber, chief of infectious diseases at North Shore University Hospital and Long Island Jewish Medical Center in New Hyde Park, New York told CBS. Symptoms include fever, chills, sweats and lack of energy. But the key indicator of this infection, Farber says, is found in how quickly the person becomes very ill.

According to Farber, this infection is usually at the hands of a dog bite, making this case rather unusual considering the woman had only been licked by her pet, not bitten.

But don't muzzle your puppies and kittens just yet. The bacterium is very rare (there were only 13 reported cases in the UK and roughly the same in the US) and can typically only be transferred through a bite or a scratch — not an affectionate lick. Even then, you're really only at risk if you have a compromised immune system, like those of newborns and the elderly.

Thankfully, you can treat the bacteria with antibiotics, and the woman returned home after two weeks in intensive care. She then likely cuddled with her dog for some healthy puppy therapy.