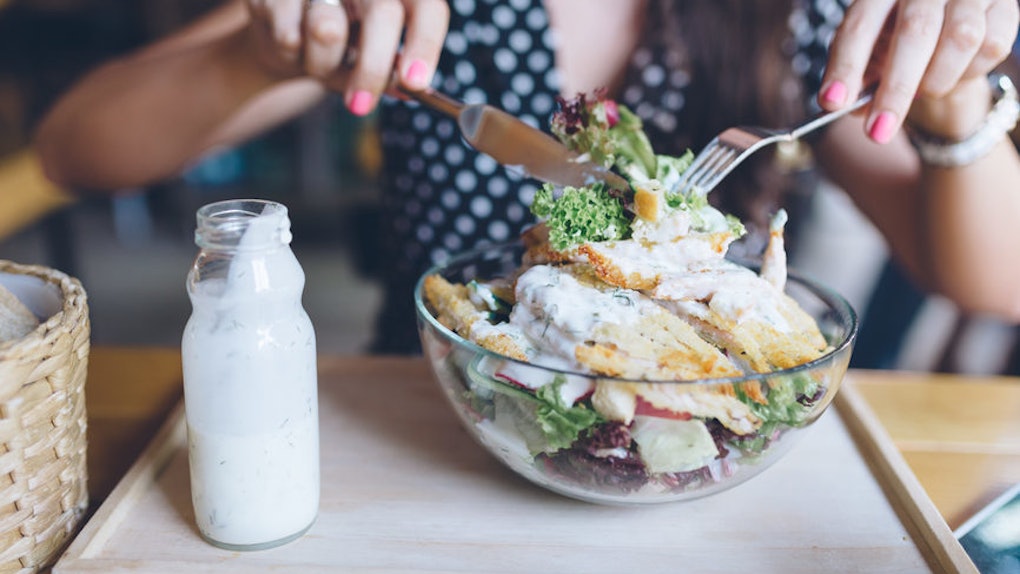 The Trick To Preventing Unexpected Bloating Is Surprisingly Simple

If you're a human, you're probably no stranger to bloating. I, for one, currently feel like a whale due to my period, having a huge lunch and drinking a Starbucks Venti iced coffee. Basically, I'm a resident of Bloat City, and it looks like I'm stuck here forever.

If I wanted to avoid feeling like a walrus, I should've done one thing differently (well, a lot of things, but I digress.) Namely, I should have eaten a salad before my meal.

Apparently, eating a salad prior to inhaling the rest of your meal lubricates your digestive tract and acts as an enzyme, integrative nutritionist Daphne Javitch told Vogue.

Salad wants to move through the body faster than denser food.

A good, old-fashioned Caesar will do wonders for your digestive process, as well. The leafy dish helps keep heavier food moving through your body, which will decrease the pressure and gas that can build up. Basically, it'll help you from reaching that point of the day when you just want to roll over and die in the middle of your afternoon meetings.

If eating an entire salad before a meal sounds absolutely bonkers to you, nosh on a couple of veggies (think baby carrots, some cucumber slices or a nibble of bell pepper) prior to whatever it is you're indulging in. Don't wait until after the meal to stuff your face with greens, though: eating veggies after you're done with, say, two maki rolls will only clog up your digestive system and make the food take even longer to pass through your body. Basically, the greens will have the reverse effect and leave you even more miserable than before.

On that note, time for my third cup of coffee of the day -- and, OK, maybe I'll also pick up some veggies for a salad to go alongside my dinner tonight.