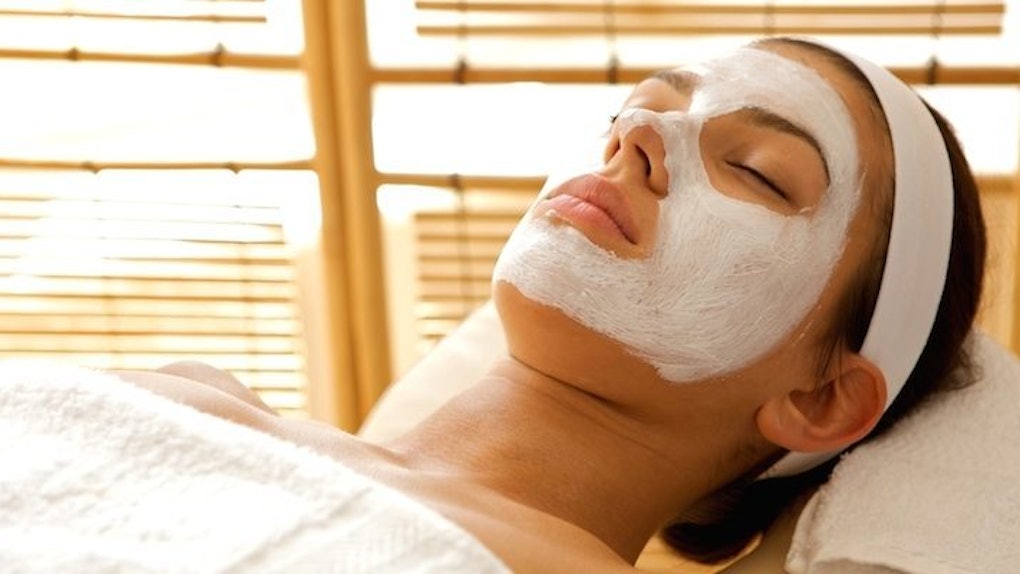 I was doing my usual morning skim of weird sh*t to try out for article when one activity shot out at me in technicolor: "Bird Poop Facial."

I, being the 10-year-old boy that I actually am at heart, just really essentially saw the word "poop," laughed and couldn't resist.

Shortly after that, I headed to the Shizuka Day Spa for my scheduled facial. Shizuka HERSELF offered me the $180 facial on the house. My joke, like many others before it, had officially gone too far. I just volunteered to have bird sh*t smeared all over my face. It was really going to happen.

Not gonna lie, I was nervous. WTF did I get myself into? I imagined myself walking into a dingy dungeon with a little boy whose sole job in this world was to collect droppings from poor, sad-looking birds caged in the far right corner. Then, he would hand the droppings to the practitioner, who would tenderly but firmly smear the poop onto my face as I was scared but also kind of comforted by her strong presence.

Needless to say, I was completely wrong. Shizuka Day Spa is swanky to say the least. It's located in a very chic high-rise where there is security to check you in at the lobby.

The desk receptionist gave me some papers to fill out. There were not only standard questions about my skin (I'm lucky to have pretty decent skin with the exception of some blackheads that WILL NOT leave my nose), but also a section where I was asked to rate on a scale of 1 to 5 all of my spa preferences, from how much I like to chat during my treatments to how much I like to be pampered.

After filling out the form, I was ushered into the locker room and greeted by some of the fluffiest, most cushion-y slippers my feet have ever had the pleasure of sliding into. I felt like a swaggy samurai. Like Mulan when she got back from war and just wanted to chill for a little.

By the time I got into the waiting room, I was ready to rumble.

After a short wait, I was greeted by Shizuka herself (!) as she led me to the room where I would be getting my facial. Like everything else at Shizuka Day Spa, it was immaculate and beautiful. Plus, look at that cute orchid!

I slid right under the covers, so comfortable that I almost forgot that bird sh*t was inevitably going to be smeared across my face at some point. I asked my girl Shizuka to give me a heads up before "it" was about to happen.

Up until that point, I gotta say, as someone who has had her fair share of facials, it really was nothing out of the ordinary. It was just a good solid facial. She thoroughly cleaned my face, put that steamer thingy on me ... and started stirring the bird poop concoction.

Let me go into some details for you about this experience.

How did Shizuka think to use bird poop?

Shizuka herself is Japanese. When she was growing up in Japan and struggling with her own skin, her mom used to tell her about how the Geishas, who had flawless skin, used to put nightingale droppings on their faces.

Like any self-respecting teenager, Shizuka ignored her mother. It wasn't until some 40 years later when she was trying to rack her brain thinking of a new innovative way to help better people's skin that she revisited her mom's old piece of advice.

She did some research and realized there was actually a lot of history and scientific backing behind the story her mom had told her.

What in the world could bird poop possibly do for my skin?

Turns out bird poop contains enzymes that help clean and exfoliate the skin. Nightingale poop in particular is different from other kinds of bird poop because it contains urea and guanine.

I know what you're thinking: WTF are those things, and how do they help my skin? Well, the nitrogen-rich urea helps the skin hold in moisture. Meanwhile, guanine is an amino acid that works to create that shimmery, iridescent effect we hope to achieve post-facial.

You know that part of a facial between the steam and the death pain that comes from getting pricked? Well, if you don't, let me explain: First, an esthetician cleans your face until you feel like it is the cleanest it has ever been. Then, she puts a humidifier in your face to open up your pores. Finally, she picks at all your clogged up pores now that they are nice and big until your skin is blemish-free.

After she steams you and before she picks at you, she usually exfoliates you. This is where the bird poop comes into play. The bird poop replaces the exfoliator stage.

Where does Shizuka get the bird poop?

OK, so everyone can chill the f*ck out. It's really NOT THAT GROSS.

Shizuka gets the droppings from Japan, where a manufacturer collects them, lets them dry (vaporize) and finally sterilizes them with a UV light. This sh*t is clean, you guys!

So here's what it looks like when she's finally ready to use it:

Then, she mixes it with water to turn it into a paste that she can rub on your face. It looks like this:

See? Not your average bird sh*t you see on some gross, old park bench. This is swanky bird sh*t.

Peanut butter power bar. Don't ask me why. It just did.

It honestly felt like any other exfoliator you would use. Like a face wash with a little bit of a sandy grain to it.

What would Candice look like if she just barely survived a zombie apocalypse?

(Also this is what it looks like when the bird poop is on your face.)

Did it actually work?

I get a lot of blackheads on my nose, and I gotta tell you, they were gone after the facial. The bird poop was supposed to help clear my blackheads and, not gonna lie, it did. My nose is soft as a baby's bottom.

So would I get a bird poop facial again? Yes. But only if I got to wear those slippers again.