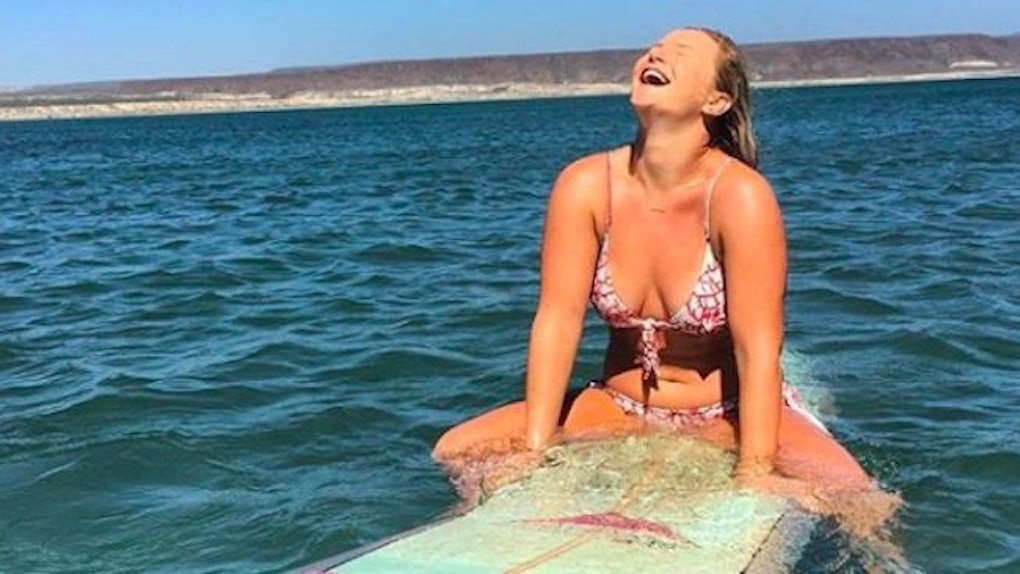 For most people, going to the beach is an escape from the real world. It's a way to ditch your daily responsibilities for a moment and enjoy the laziness and freedom that come with being a total beach bum. And thankfully, science is finally backing up the idea that going to the beach can improve your mood, and may even be able to boost your brain power, too.

According to the study, which was originally published in the journal Health & Place, researchers found that those who live by or spend ample time on the shore are in better physical and mental shape than those who camp out in the air conditioning all summer.

Ugh, I knew I should never have left Hawaii.

Even if you're not really into the beach, there's no denying the positive effects a few hours in the sand can have on your brain and body. Here are a few that might persuade you to lay out for a day.

1. The Beach Is A Different World In And Of Itself

A beach could be neighboring a busy town full of chattering tourists, but the second you step on the sand, it's like nothing else exists but the ocean water that extends before you for miles, and the crisp silence that's almost exclusive to the shoreline.

Much like gloomy weather can make you depressed, the warmth and brightness of the sun can elevate mood and make you feel happier. [The beach] pleases your senses -- soothing sounds and smells can also make you feel happy, such as the crashing of waves, kids playing in the distance, birds flying overhead, and the scent of salt in the air.

Taking the time to close your eyes and really feel your skin soaking in a natural helping of vitamin D as you listen -- and maybe even meditate -- to some of the purest sounds of nature can really be like a mini vacation for the mind.

2. The Colors Of The Ocean Can Make You Feel Zen AF

Soft blue tones are soothing to look at.

Gazing into a clean body of water reflecting a bright blue sky is way more likely to bring you a sense of peace than, say, staring into a TV screen full of dancing, pixelated, artificial colors.

Give your eyes a rest from the blue light of your smartphone screen for a change and, instead, focus on the gently rocking waves before you.

3. Swimming (Or Even Just Being Around Water) Can Inspire Creativity

The best ideas always seem to come to me when I'm standing under the shower head or soaking in the bath.

This is because of a little thing called “blue space,” which refers to when you are in or around water.

The shower is a proxy for the Pacific Ocean or the Atlantic Ocean. You step in the shower, and you remove a lot of the visual stimulation of your day. Auditorially, [the ocean] is the same thing — it's a steady stream of 'blue noise.' You're not hearing voices or processing ideas.

Similar to white noise, blue space and noise disconnects you from the hustle and bustle of your everyday life and allows thoughts to come and go organically without interruptions.

4. The Sounds And Views Of The Ocean Can Give You A New Perspective On Life

Did you ever pick up a conch shell and press it to your ear as a kid? Growing up, I was told the rushing sound vibrating from the large shell was the sound of ocean waves crashing into the sand before pulling away from the shore.

Even though the swishing noise wasn't an actual soundbite reverberating from the beach, I'd always feel a sense of calm when I listened closely to its gentle hum. This is actually because the ebb and flow of the ocean de-stimulates your brain.

Kiaser explains in an interview with Elite Daily,

For most of us, life is filled with a lot of activity and chaos, but the calm of the beach, where there is a slowing of activity, can help reduce stress and open our minds to increase our ability for happiness. People I have worked with have also described that the beach puts life into perspective for them. For example, when they look out at the ocean, everything seems so much bigger, which makes the difficulties of life feel smaller.

5. The Scents Of Sand And Surf Are Good For Your Sense Of Smell

The smell of salt water mixed with sand is much more soothing for your body in comparison to the negative ions in the air you normally breathe in.

So take a big, huge whiff as you laze on the sand -- it's one of the freshest breaths of air you'll take all year.