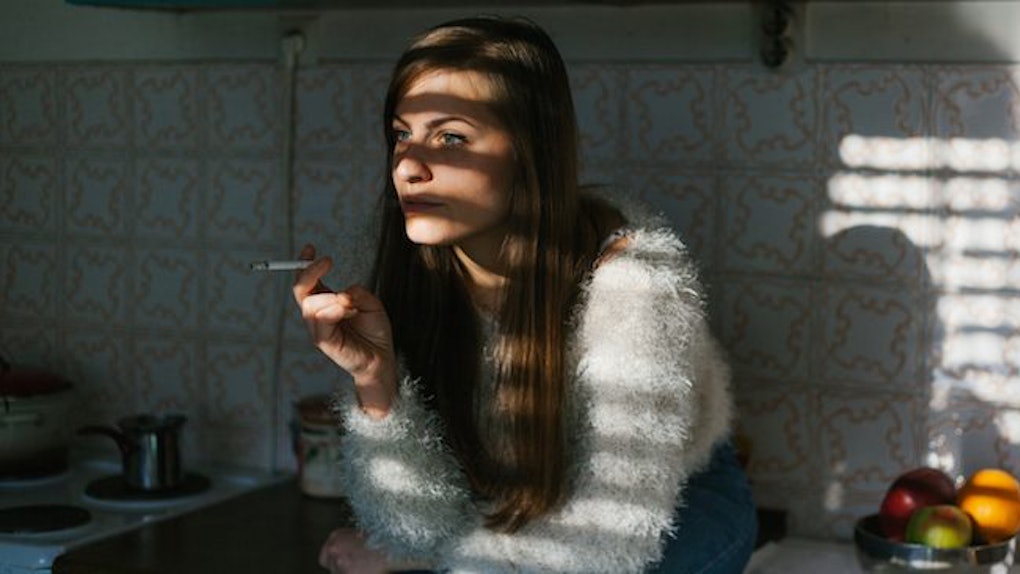 Although cigarettes have become less popular among young adults in recent years, smoking still hasn't totally disappeared from millennial culture. According to the CDC, about 17 percent of young adults currently smoke. I know the reality of this statistic because I am a 25-year-old woman who once fell into that 17 percent, and it took me forever to figure out how to quit smoking cigarettes and finally break the habit for good.

Of course, I tried to quit several times in the past. I followed the advice of every health blog telling me the secret was to try yoga or exercise. But if I'm being honest, after running on a treadmill or stretching for an hour, all I wanted to do was congratulate myself with a post-workout smoke.

My next attempt involved hundreds of dollars spent on nicotine lozenges, which were satisfying, but expensive. I ended up smoking again when I couldn't afford to buy the gum, but could easily splurge on a pack of cigarettes.

Clearly, these strategies weren't working for me.

My story isn't unusual by any means. Studies show, on average, people may attempt to quit smoking anywhere between six and 30 times before finally committing to a cigarette-free life, and quitting often involves a mix of trial and error until one method actually sticks.

Here are a few strategies that helped me ditch cigarettes for good after I had already tried just about everything else.

Keep in mind, these methods may have worked for me, but they may not necessarily do the same for you. Be sure to consult with your doctor about which strategies will work best for you.

1. Satisfy Your Oral Fixation With Something Else

Chew gum, yes -- but only regular gum. Many people have trouble breaking the oral fixation associated with smoking, so they turn to things like nicotine gum.

But the problem with this is that nicotine is what makes cigarettes addictive in the first place. So, while chewing on nicotine seems like a practical solution for those wanting to slowly wean themselves off of cigarettes, research shows they do little to eradicate dependency.

A 2012 study done by The Harvard School of Public Health followed 787 people who had quit smoking over the course of six years. They found that those who used nicotine replacement therapy -- whether it be gum or the patch -- were just as likely to pick up smoking again as someone who didn't use it at all. The study also found that heavy smokers who turned to nicotine replacement therapy were twice as likely to relapse as those who simply went cold turkey.

In other words, nicotine gum isn't always a quick-fix to keep you from smoking cigarettes. For many people, it's often just a temporary quitting method that allows you to enjoy nicotine in a slightly safer way.

But, it turns out, you really can reduce cigarette cravings by simply chewing regular gum. A 2010 study from Addictive Behaviors found that dependent smokers had an easier time managing withdrawal symptoms when they were given regular chewing gum over a 24-hour period.

So, while there still needs be more research on the long-term effectiveness of chewing regular gum on quitting, it can still be a great way to satisfy the oral fixation to smoke without putting an addictive substance in your body. Just be sure to opt for sugar-free, but flavorful varieties, such as Big Red, because it's possible to become hooked on sugar, too.

Another alternative is to buy a reusable water bottle and take a sip every time you get the urge to smoke. Your body will thank you, and so will the environment.

Apps like Smoke Free! allow you to create a custom profile based on your history of smoking, and track how many cigarettes you haven't smoked once you set an official quit date. It then uses this information to calculate how much money you've saved each day by not smoking.

Honestly, there's no greater feeling than watching that dollar amount slowly creep up to the hundreds, and thinking of all the good things you can be doing with that extra cash.

Also, downloading a game (whether it be Bejeweled, Quiz Up, or if you prefer to go old school with an adult coloring book) can be a great way to distract your mind and keep your hands occupied when you get the urge to smoke.

Remember, cravings are only a temporary feeling, so the longer you channel your mental energy into something else, the better.

Most parents are not OK with people smoking around their kids -- which is great for you if you're trying to quit.

Make it a point to hang out with these people more, because they won't just discourage you from smoking; they'll straight-up prohibit it.

I recently spent a weekend with friends who had just brought an infant into the world, and my desire to cuddle said baby outweighed any desire to sneak away and smoke on their back porch.

It turns out, after three days of not smoking, nicotine pretty much disappears from your bloodstream, which also coincides with when withdrawal symptoms are the most intense. Research says cravings lessen over time after the first few days of quitting, which means the longer you stay abstinent, the easier it gets. If you can make it through the weekend with your non-smoking friends, hang in there, because the worst is pretty much over.

If there aren't any babies in your family or social circle, try and volunteer somewhere where there are kids around, or elderly folk, or spend your time at any place that generally frowns upon smoking.

4. Treat Yourself To Nice Clothes, And Wear Them Often

One surefire way to motivate yourself to quit smoking is to realize how bad you stink, because let's face it, no one wants to be the guy or gal in the group that smells bad.

Smokers are notorious for the being nose-blind to how awful they smell to everyone else. And the thing about cigarette smoke is it lingers like an ex who just can't let go. It can take months, even years for a smell to leave the inside of your car, or to fully disappear from clothing and furniture.

So treat yourself to some new clothes -- a nice blazer, a sexy dress, or even new lingerie. No matter what it is, make a promise not to smoke when you wear it.

After a few weeks of not smoking, you'll start to notice the scent of your old clothes. Make a point to smell them, and then breathe in the glorious scent of your new, clean clothes. When you notice the difference, you'll seriously be amazed.

Throw away (or better yet, donate, because yay sustainability!) your old clothes that you associate with smoking. If you have a "smoking jacket" you wore for your morning drag after coffee, let that bad boy go.

It's important to feel comfortable purging yourself of the things that remind you of your old habits, much like how it feels right to throw away old pictures of someone who broke your heart.

Leave that sh*t in the past where it belongs.

5. Think About Why You Started In The First Place

Most people have a vague idea of why they want to quit smoking, and the reason is usually something like "to be healthier." But even that end goal is too general, because it doesn't really get to the root of the problem.

Oftentimes, cookie-cutter guidelines for quitting don't always work because everyone is addicted for a different reason. For example, some people smoke heavily when they drink alcohol, so reducing (or eliminating) a drinking habit is the first step.

On the other hand, for some people (like myself), smoking is a way to alleviate social anxiety. For me, it was the crutch that kept me from both confronting and fixing my personal issues.

When I decided to quit, I wrote down all the things that stressed me out, and tried to come up with strategies for how I would handle them. By finding new ways to cope with my stressors, I started to realize smoking was not the remedy. Once you can manage to do this, you'll notice the cravings will hit you less often, and less intensely.

Remember, you are not alone in this struggle -- but also know your journey is yours, and yours alone.