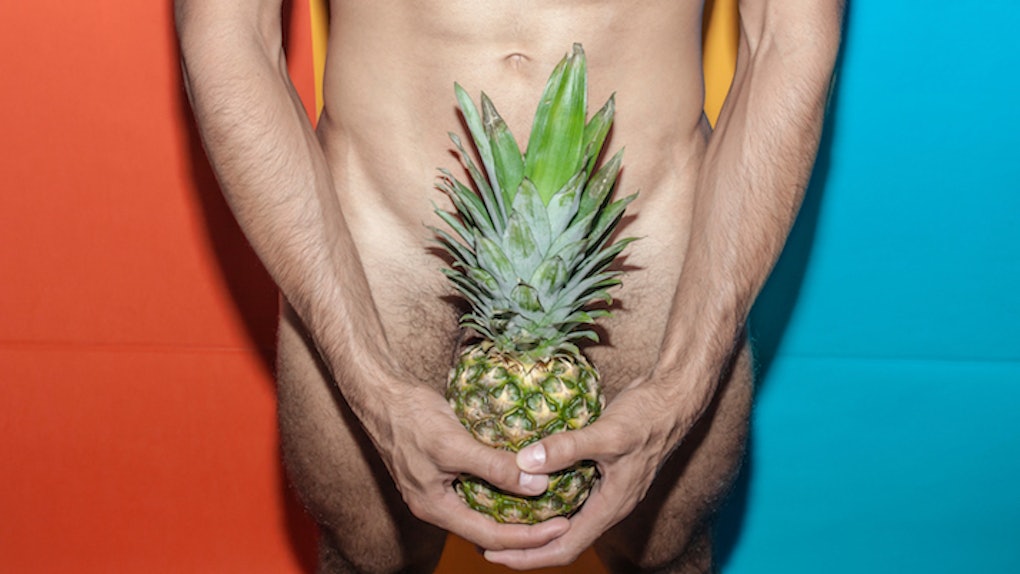 We read and hear about women's body image issues on a daily basis.

We are constantly told how it's important not to fat-shame or skinny-shame anyone. How all boobs are beautiful, whether they're big, small, lopsided, or even saggy. How whether you're apple-shaped, pear-shaped, or even a perfect hourglass, you can all find amazing outfits to suit your bodies.

Even big-name brands, like Dove, have established campaigns to bring awareness to female body image issues, and embrace the belief that all women are beautiful, no matter what their size is.

But what about men's body image issues?

If you thought men could never be insecure about their bodies like women are, then you're dead wrong.

One of the things that often make men slump their heads in shame and feel like hiding under a rock, is hearing from the media about the prototypical penis, and realizing they don't measure up to those standards.

Or even worse, being told by a woman that they suck in bed. These things can really mess with a man's self-esteem, and make men feel as if they are physically incapable of satisfying a woman.

There's also quite a bit of resentment that goes on regarding the stereotypes surrounding the size of a man's penis with respect to race/ethnicity. Black men supposedly have the biggest penises, and Asian men have the smallest penises.

If a woman you know has started dating a black man, you see the other guys sitting there, rolling their eyes: “It's probably cause he has a big dick.”

I used to have an Asian boyfriend, and when we broke up I was often asked if one of the reasons for the breakup was his penis size (which it wasn't, btw).

Society paints penis size as a deal-breaker. And don't let me tell you otherwise; for some people it really is. But the truth is, for most individuals, penis size is not as a big of an issue as you think it is.

From a woman's perspective, here are three reasons why.

1. The Media Magnifies Everything

A lot of us girls don't even like those.

We have these walls called cervices, which are the barriers between the vagina and the uterus. The average vagina is only 3 to 4 inches deep, although they can expand to around 5 to 7 inches deep when aroused.

But still, this means that for the average woman, big penises can start to be very painful, especially when the sex gets aggressive and the guys start thrusting and is constantly disturbing the cervix.

2. It's all About the Motion of the Ocean

You've all heard it, and it's very true. It's not about the size of the ship, but the motion of the ocean. If you thought a woman judges good sex based on how large you are down there and how hard you can thrust, you are sadly mistaken.

We care about how you give it to us.

Are you tugging at our hair and sucking on our necks as you give us some lovin'? Do you grab our booties and caress our breasts during doggy style?

Do you say naughty things to us, and simultaneously make us feel safe, and cared about?

Do you just treat us like goddesses while you enjoy our bodies?

I guarantee you that most women will agree that these things always trumps the size of the penis.

If you've been getting the vibe recently that your girl isn't enjoying sex with you, stop frowning down at your penis. The issue is probably how you're using it.

3. Foreplay is 80 Percent of Good Sex

I can't speak for all men, but my assumption is that what the majority of men enjoy about sex is the actual act itself; thrusting their junk in women's vaginas.

This is one of the things they've so been craving since they first realized they wanted a girl; sexually or otherwise. That's not to say that's all you men care about, but surely, that's what you think of first when you envision yourself naked with the girl.

But for a lot of us women, it's a little different.

We care a lot about foreplay.

The worst sex a lot of us girls have had has not been with a guy who's had a small penis, but a guy who didn't know how, or didn't care to properly turn us on and wanted to jump right into it.

Now is it true that penis size doesn't matter to anyone? I can't say that. There are undoubtedly some people out there who really feel it affect their relationships, and that's okay – for some people it might.

But there are also many of us who don't care much about it.

So all you guys out there who are paranoid about going up to women and talking to them freely, don't feel that way. I guarantee you your personality and how well you both vibe will catch her attention over your penis size in the long run.

As for any of you men out there who've been told you suck in bed, maybe consider improving your technique before blaming it on your member.