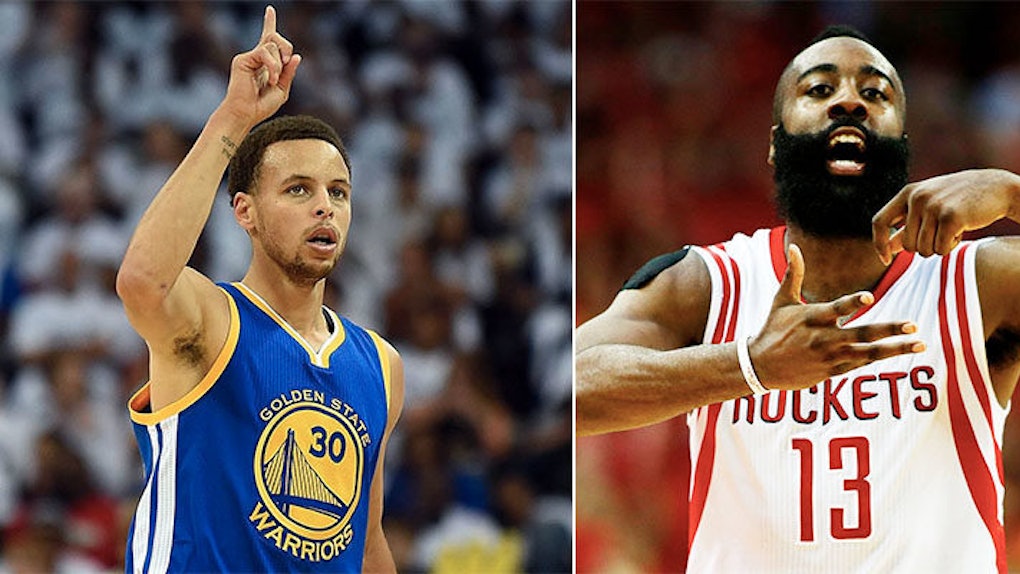 To some, it seemed obvious. To others, it was a tight race.

The 2014-2015 MVP race was a whirlwind of Stephen Curry, James Harden and a dash of Russell Westbrook.

However, Westbrook's elimination from the playoffs eliminated him from MVP contention, leaving Harden and Curry, the undisputed leaders of the Western Conference, to battle it out.

Now, the two meet in the Western Conference Finals in what seems to be the perfect opportunity to prove to one another who really deserved the award.

The two have a playfully competitive history off of the court, and by this point in their careers, they respect each other's games.

Tensions might flare in the following games, but there certainly won't be any bad blood between the two when the confetti is falling at the end of the series.

They've even played together before at Lebron James Skills Academy. To be the best, you've got to learn from the best, right?

Some will argue the regular season MVP race didn't do Harden justice, given the fact that Harden dealt with numerous teammate injuries, including star center Dwight Howard and defensive specialist Patrick Beverley toward the end of the season.

Harden enthusiasts claim he not only played without a fully healthy supporting cast, but in fact, he thrived without it. Harden led the Houston Rockets in Dwight Howard's absence, and the numbers revealed the Rockets didn't miss Dwight much while he was gone.

Since Dwight was injured in December, Harden shouldered the load for the Rockets and exploded for nine of his 10 40-point performances.

Curry had three 40-plus-point performances himself this season, but it would've been selfish (and a waste of talent) to try and outshine his fellow Splash Brother, Klay Thompson, with any more.

But, Harden beats Curry in rebounds, blocks, points per game, minutes per game and win shares.

The stats, advanced and regular, make it too tough to determine who actually deserved the MVP award.

If you based the award off of wins and team record, Curry is the unanimous MVP because of the Golden State Warriors' fantastic 67-15 record in the regular season. Let's not forget the Warriors only lost two games at home all season.

If you want to base the award off of individual performances, Harden would take it.

He finished just behind Russell Westbrook in a scoring title race that was even tighter than the MVP race. He also posted career highs in nearly all his statistics.

If you based the award off of flashiness, well, sorry Harden. Curry can make any defender, from positions one to five, look stupid with his wide array of dribble moves and fancy shots.

Simply put, I almost feel bad for the person putting together his 2014-2015 highlight tape. There's simply too many plays to choose from.

It's very likely that voters picked Curry for most of the factors above. He's flashy, he led the best team in the NBA, and he's efficient. Oh yeah, he's pretty clutch, too.

Not everyone was happy with the MVP award this year, and with the amount of extremely competitive talent in the league nowadays, it's likely no one will be pleased with future results. Even Kevin Durant's monstrous last season didn't win him a unanimous decision.

That being said, Harden now has an opportunity to outdo the MVP and make it to his first NBA finals since his time with the Oklahoma City Thunder.

Curry has the chance to see his first NBA finals and create his own legacy. Regardless of who takes this series, we're in for a show.