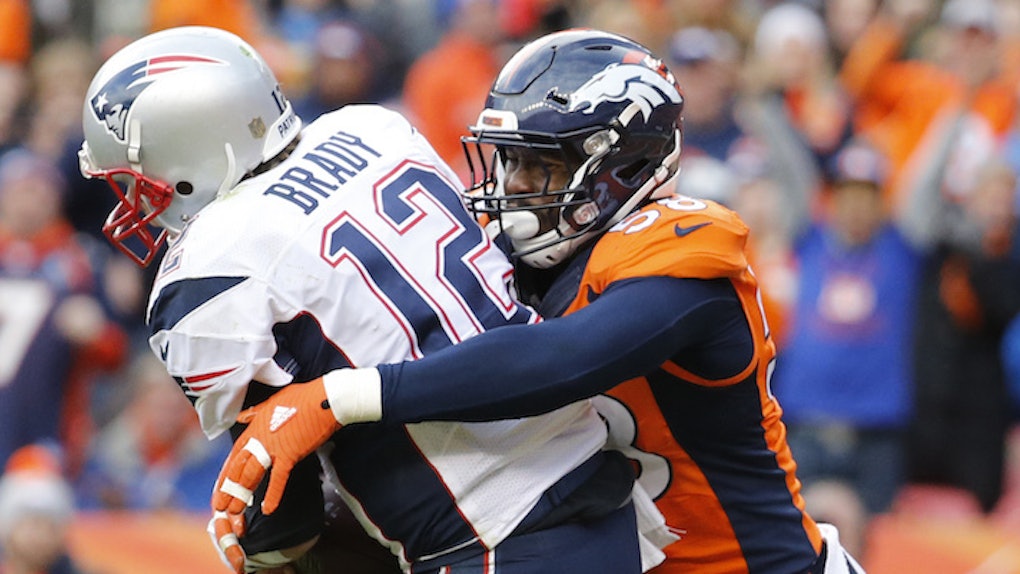 There are gods. There are men. And then there are the gods who walk among men.

Enter professional athlete Von Miller: Women pine for him, and men want to be him. From his unceasing strength on and off the field to his poise under pressure, he embodies everything we mortals strive to be.

What exactly is it that sets Von Miller apart from all the other guys out there?

To answer this question, just look at his pre-game rituals — his routine is macho to the core. He puts in the hard work every single day to make sure he is the best version of himself. It's what separates him from everyone else.

So feast your eyes on his habits: You'll learn a thing or two about your new favorite manly man, and who knows, maybe you'll even grow a little chest hair in the process.

1. He bathes in a partially-frozen river.

Miller starts each game day (and each non-game day, for that matter) with a dip in the crystal clear waters that flow from the Rockies. Regardless of the season or the weather, he consistently finds himself dodging chunks of floating ice as he purifies his body and exfoliates with the pebbles that line the river floor.

2. He forages for his own breakfast.

Von Miller works hard from the MOMENT he wakes up — even before he's had his breakfast. He uses his extensive forestry training to uncover only the most nutrient-rich berries, roots and leaves. He cooks up a square breakfast over an open flame that he rustles together using nothing more than rocks, a piece of kindling and his own two hands.

3. He stretches using nature as his gym.

To limber up before a game, Miller heads over to a cliff near his cabin. He dangles from the cliff's edge, alternating holding himself up with his left and right arms. As he tries not to fall to his death (not difficult — this is Von Miller we're talking about), he simultaneously loosens up his triceps, biceps, shoulders and obliques.

4. He takes a moment to honor the manly men who came before.

Like any self-aware star, Von Miller knows he didn't make it to the top all on his own. That's why he takes a moment of silence each game day to give thanks to John Cena, Dwayne "The Rock" Johnson and all the other manly men who paved the way.

5. He travels to the stadium on nature's roadways.

Instead of indulging in luxury cars and chauffeured limousines, Von Miller prefers to use the transportation options provided by God's green earth. He's been known to saddle up a bison, wrangle a pack of sled dogs or simply paddle a canoe (upstream both ways) to the stadium on game day.

6. His go-to warmup music rotates exclusively between old-timey Scottish bagpipes and the soundtrack to Rocky IV.

Like everyone else, Von Miller needs just the right Spotify playlist to get him in the mindset of a winner. Unlike everyone else, he stays away from top 40 tracks and sticks to beats that are as manly as they are historically significant.

7. He calms last-minute nerves by building stuff out of wood.

Not even Von Miller is immune to pre-game nervousness. To combat this, he turned his locker into a wood shop, where he spends a few minutes before each game building a small wooden rocking chair out of solid Colorado Pine. Once it's completed, Miller is looking forward to personally delivering it to a child in need of some solid craftsmanship.