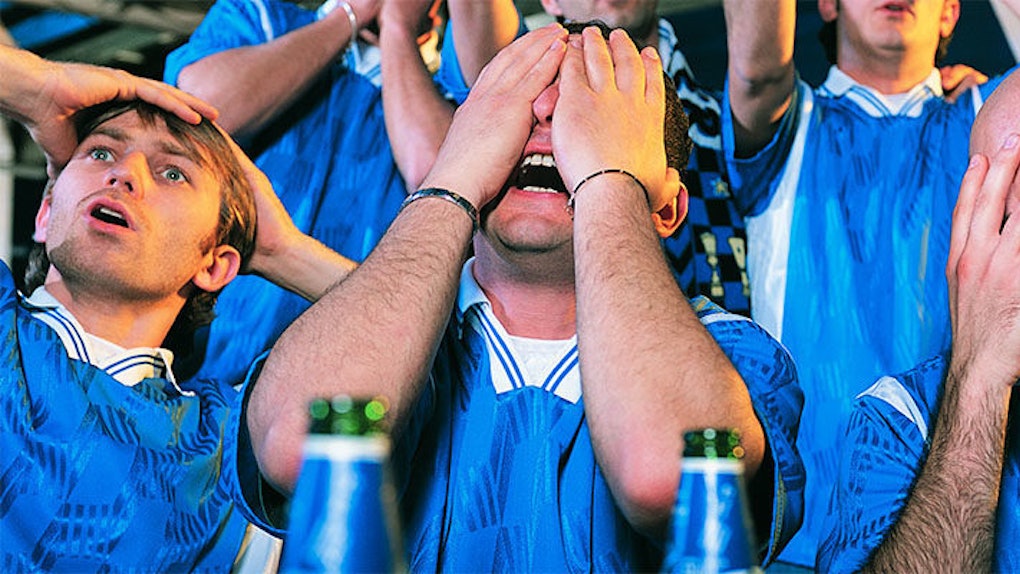 The Struggle Is Real: Being A Beginner Premier League Fan In America Sucks

With a record number of Americans watching the 2014 World Cup in Brazil, football has become more popular than ever in the United States.

And, what better league to watch than England's Premier League, a league containing teams with 100-year histories and rivalries, multi-million-pound budgets and some of the best players in the world?

But, loving the Premier League from across the pond isn't always easy. Here are some reasons why:

If you want to be a fan of the Premier League, you'll have to give up sleeping in. Saturday's slate of games generally begins at 7am on the East Coast and 4am on the West.

You'll groan every time the announcer comments on what a lovely lunch-time game you're watching while you rub gunk from your eyes.

NBC currently holds the rights to Premier League games in America. This means you can watch the 12 o'clock game on NBC every Saturday.

That is, unless there's a golf tournament or car race happening at the same time. And, you can bet that the West Ham United versus Newcastle game you wanted to watch isn't in that slot. Hope you like Manchester United, Chelsea, Arsenal or Liverpool.

If you want to catch a few more games on TV, you can pony over the cash to get NBC Sports Network.

And, even then you may have to watch that Tottenham Hotspurs game on your computer (assuming you have a cable subscription). I promise you, every time your team scores a goal, the feed will cut out.

I can sum up my football-at-the-bar experience with one anecdote: I'm sitting at the end of the bar, watching Tottenham play Swansea on a tiny TV in the corner with a crick in my neck while the Chelsea game blares on the main screen.

A man comes up to me and says, "You watching that Spurs game?" Yes. "You like Tottenham?" Yes.

He pauses. "More than Manchester United?"

You've picked your favorite team. You've watched a few games. Perhaps, now you've developed a favorite player; maybe that striker who's scoring all those goals, or a dominant midfielder.

So, like you would with your favorite American football, basketball or baseball player, you buy a jersey, or kit in this case, with his name on it.

You wear it while you watch some games; maybe you go to the bar in it and get cheers from your fellow fans. Then, at the end of the season, the team announces they've sold him to Real Madrid for 90 million pounds.

American sports don't end in draws. Americans would rather sit through 19 scoreless innings of baseball or five basketball overtimes than see the teams leave the field without one being a winner and the other a loser.

In 2008, Philadelphia Eagles quarterback Donovan McNabb admitted that after 10 years in the Nation Football League, he didn't know an American football game could end in a tie.

So, expect to feel unsatisfied after you watch your team battle to its first zero-zero draw and walk off the field clapping.

The fact that a sports game could end without either team scoring does feel unnatural. But you'll have to get used to it, because there are a lot of draws. And, yes, both teams do get a point.

Despite all those hardships (and all those Man United fans), watching Premier League football is well worth it. Soon you'll understand when a player is offsides, even if you never agree with it.

You'll find the best time and place to watch your favorite team with some of the most passionate fans in the world.

You'll come to love just watching the beautiful game and all the wonderful goals and flops that come with it. Now if only someone would develop a guide to when to call it soccer, and when to call it football, that would be great.