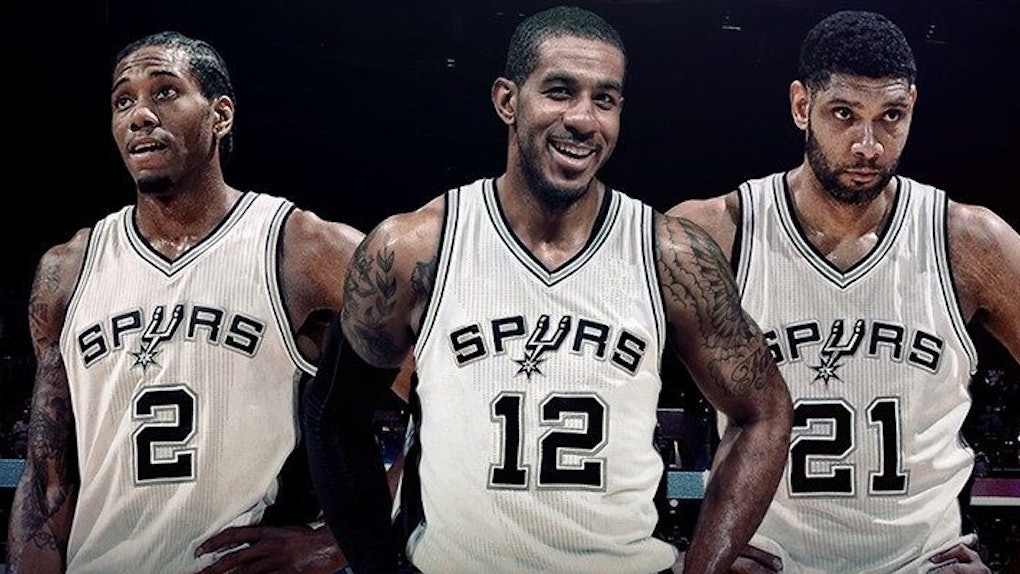 As the NBA regular season winds down and teams are brawling for playoff positioning in an attempt to recover from their mid-season slump, the San Antonio Spurs are routinely preparing to make another deep, post-season run.

This is a system orchestrated by head coach Gregg Popovich, responsible for leading the Spurs to the best overall record since the 1997-98 season. Going 1,005-423 for a .703 winning percentage, the Spurs lost nine of 13 games eight weeks into last season. Extending losing streaks into four-games following the All-Star break was uncharted territory for San Antonio.

After having an up-and-down regular season and losing a long, hard-fought seven-game series to the Los Angeles Clippers in the first round of the NBA playoffs, the Spurs entered the offseason with many unanswered questions.

The team's early playoff exit sparked a debate on whether it could mean the end of the era that began in 2002, when shooting guard Manu Ginobili joined forces with point guard Tony Parker and power forward Tim Duncan, giving rise to the league's most successful trio ever.

Perhaps, losing center David Robinson to a left-foot injury six games into the 1996-97 season was the start of it all.

Finishing with an overall record of 20-62 and selecting Duncan with the first overall pick in the 1997 NBA draft -- thanks to a lucky bounce from the ping-pong balls on lottery night -- set off a rippling effect that changed the fortunes of the franchise.

A Spurs offense that was once primed with post-ups from Duncan has now evolved into a near-perfect formula that's motion-orientated, fast-paced and thrives off player and ball movement.

The old saying, "Offense wins games, but defense wins championships," is commonplace, but can't be legitimized without a team program that abides commitment and resists complacency. "Egotism" is just not a word in the Spurs' playbook.

Twenty-four-year-old Los Angeles native and small forward Kawhi Leonard, who was acquired in a draft-day deal that sent point guard George Hill to the Indiana Pacers in 2011, changed the dynamics of the Spurs' perimeter defense.

Having to guard the opposition's top scorers, like LeBron James, Kevin Durant and James Harden, is no easy task, but it's a role Leonard takes pride in -- other than scoring. His defensive numbers have steadily improved across the board each season.

Averaging 5.9 defensive rebounds, 0.8 blocked shots and 2.3 steals per game during the 2014-15 season, he left opponents shooting 38.2 per cent when the reigning Defensive Player of the Year defended the three-point line.

With 10 contracts coming off the books this summer, the organization is well-positioned in pursuit of a mass free agent.

After playing his first nine seasons with the Portland Trailblazers, the most sought-after free agent of the NBA offseason, power forward LaMarcus Aldridge, signed a four-year, $80 million deal with the Spurs, which includes a player option after the third season.

Being positioned in a small media market has proven to be irrelevant in recent years in the NBA, and money was likely not a deciding factor.

Spurs General Manager R.C. Buford's loyalty to winning only made it easier to persuade Aldridge that not only could he be a champion in San Antonio, but also the next face of the franchise in a post-Duncan era.

Aldridge averaged a career-high 23.4 points, along with 10.2 rebounds in 71 games last season, and will look to add balance to San Antonio's offense with his youth.

The 30-year-old All-Star will be a huge part of the Spurs offense moving forward, and he is a solid defender with his length and mobility.

This is despite it being expected of Buford to re-sign Leonard to a five-year, $90 million maximum contract, and assigning shooting guard Danny Green to a deal worth $45 million over four years.

The on-court future of the Spurs has never looked as promising, with Parker, Aldridge, Leonard and Green believed to be the core of the franchise for the next three to five years.

And then you have power forward David West, who turned down a $12.6 million player option contract with the Pacers for a one-year, $1.4 million veteran's minimum deal with San Antonio -- a rare occurrence of a player wanting to sacrifice money and playing time for a chance to get a ring.

Duncan, 39, is gearing up for his 19th season in the NBA, and his on-court presence is worth more than the $5,250,000 he will have been paid by the end of this upcoming season.

By taking huge pay cuts in the last couple years, Duncan has allowed for the Spurs front office to be financially flexible in not only attracting free agents, but also keeping Parker, Ginobili and himself together over the years.

Thirty-three-year-old Parker, who signed a three-year, $43 million extension in August 2014, will likely be the only remaining member of Big Three beyond the 2015-16 season.

Coming off one of the worst shooting seasons of his NBA career, Ginobili, 37, will be entering his 14th season with the Spurs and has been considering retirement.

But the former Sixth Man of the Year and two-time All-Star will return on a two-year, $5.7 million contract, with a player option after the first season.

By not living like it's the early '00s, the Spurs' prioritization of the health of their veteran players has been an underlining asset to maximizing their potential and run of 16 straight 50-win seasons.

What's viewed as a competitive advantage eventually becomes beneficial to the players' health in the long run.

There's something to be said for Duncan and Parker being absent on only one occasion in 406 playoff games combined since the 2001-02 season. Both players, including Ginobili, are averaging 31.1 minutes during the regular season over the course of their careers.

Los Angeles Lakers superstar Kobe Bryant, who, after facing a series of devastating injuries, has played in just 41 games the past two seasons combined, is a clear indication of what increased minutes can lead to.

Of his 19-year career, there have been five seasons where Bryant has averaged 40 or more minutes, and only one of those led to a championship win.

Fatigue that causes injuries and a lengthy 82-game season has a lot to with that. Teams generally play between 15-23 back-to-backs and, every so often, four games in five nights.

During the 2012-13 lockout shortened season, the NBA packing 66 games over four months prompted a profusion of injuries that proved costly to several key players -- like Chicago Bulls star point guard Derrick Rose, who suffered from a torn anterior cruciate ligament (ACL) injury during Game 1 of the playoffs.

He has played just 61 regular-season games since.

For a franchise that has never drafted higher than 20th overall and won only five championships in 18 years, the technicalities and metrics of Popovich's approach to the game have built a foundation for optimism beyond next season.

Throughout Duncan's entire 18-year career, there has been only one season where the 18-time All-Star played 40 or more minutes.

And then, the Spurs went on to win just five playoffs games during that year, making it only the third time since the 1997-98 season that the organization has won fewer than six games in the postseason.

In what seems to be a leading edge of innovation, the Spurs use analytics in injury prevention complementary to their preparation of games. It allows them to protect and maximize the potential of their assets.

In February, ESPN had ranked the Spurs seventh when it comes to the usage of analytics among North America's 122 professional sports franchises. Only the Dallas Mavericks, Houston Rockets and Philadelphia 76ers were ahead of San Antonio for the top spot in the NBA.

In early March, they were named the best analytics sports organization at the MIT Sloan Sports Analytics Conference.

With six mini cameras stationed in the catwalks of arenas, the Spurs were quick to adapt to an advanced statistics distributor called SportsVU, developed in 2005 by Miky Tamir, an Israeli scientist.

What was first put to work as a test run in four NBA arenas during the 2009-10 season is now installed in all 30 facilities across the league since the start of the 2013-14 season.

Studying how opposing teams defend the pick-and roll over 50 times in a game would be a conventionalized after-thought for what SportsVU can and will do.

Providing advanced play-by-play information and statistics on speed, distance and ball possession by tracing player movements and the velocity of the basketball at a rate of 25 times per second allows teams to come to a better understanding of the catch-and-shoot opportunities a player has over the course of a game.

Questions will be answered in facts and figures through the database and used to accurately make personnel changes to their roster.

For all one knows, it may be too early to crown San Antonio as winners of the offseason. But it would be foolish not to take notice of what the Spurs front office has accomplished this summer.

The Spurs being considered favorites to win it all next season shouldn't come as a surprise -- because it was all in the making.

This offseason for the San Antonio Spurs was not simply about wanting to shore up the here and now, but more about meeting the future in a bid to maintain its continuous onslaught of winning in the past decade.