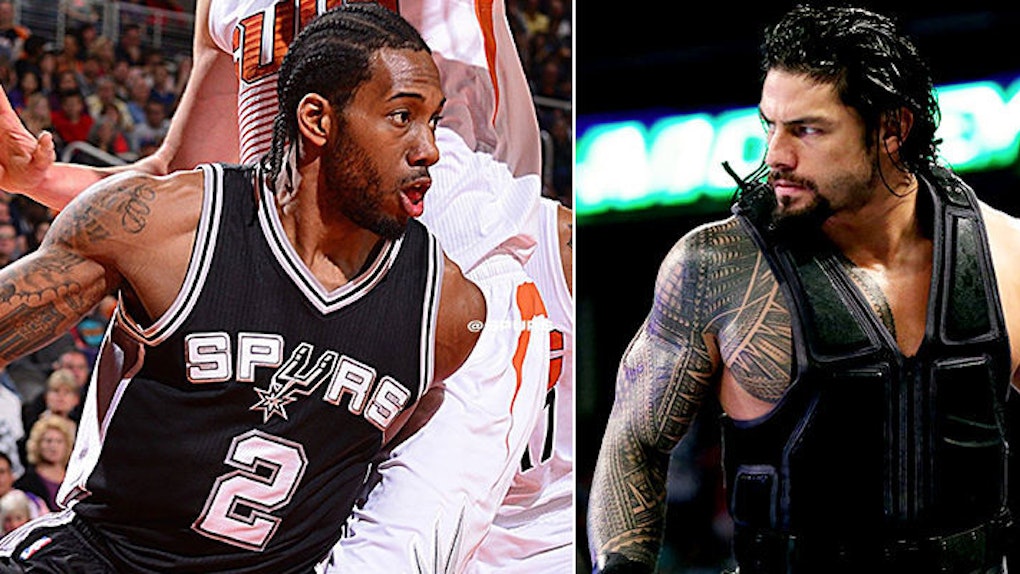 How The Spurs' Royal Rumble Mentality Can Win Them Another Title

There are a couple ways to win a Royal Rumble. The conventional strategy is to run in the ring, lay waste to your foes and be the last one standing.

This approach is advocated by the alpha dogs of the wrestling world, the dudes who eat steroids and nails for breakfast and were born to kick ass, so they do.

We love champions who slug their hearts out, leave it all on the mat and can barely stand at the end of the fight.

But, this isn't the only type of champion.

A Royal Rumble is exhausting. You have to remain after confronting every other worthy competitor. It's not enough to be talented. Good wrestlers get walloped by steel chairs just as hard as bad wrestlers.

You need to be smart and lucky, too.

Some wrestlers are smaller, older or weaker than their more naturally gifted opponents, so instead of trying to beast these behemoths one-on-one in the center of the ring, they pick their spots.

These opportunists feign helplessness until their opponents forget about them. Then, they slither around the corners of the action until the others are so ravaged that several swift, precise attacks can win the match.

It is not foolproof. Foes could sniff out the trickery and target the faker, or at the match's end, there could still be a frisky challenger to be defeated.

But, it is a way for wrestlers who are not objectively the best to win.

All of this is to say, a champion is not necessarily the best, but the one who lasts the longest.

Last season, the San Antonio Spurs were the best team, so they lasted the longest. They had six players average double digits. They had a top 10 offense and a top three defense. Their system was equal parts basketball socialism, fairytale whimsy and merciless execution.

They put up the best record, 62-20, stormed through the playoffs, and manhandled one of the most stacked juggernauts in league history during a 4-1 cakewalk to the Larry O'Brian Trophy.

This season, the San Antonio Spurs have not been the best team. They are fourth in the epic Southwest Division, which has a chance to send all five of its teams to the playoffs. They are the seventh seed in a rollicking Western Conference.

And, they've been playing without the vengeful rage they had last season after gifting the Heat their second championship after a most uncharacteristic collapse.

The team has been weaker; Kawhi Leonard's massive, recently healed hand isn't shooting threes like it did last year.

Tony, Tim and Manu have all missed time this season, and look like they've lessened their dosage from the fountain of youth. It seems Tiago Splitter, Marco Belinelli and Boris Diaw had a bit too much red wine in the offseason.

To top it off, they just lost in overtime to the New York Knicks, who are a basketball team the way your 13-year-old cousin who just discovered GarageBand is a producer.

The lower-than-low Knicks triumphed, thanks to the efforts of Alexey Shved, Langston Galloway and Lou Amundson, who are actual NBA players and not 2K-generated free agents for "association" mode.

It is the first time a team entered a game this late in the season with a record below .200 and beat the defending champions.

The noble thing to do might be for the Spurs to just call it a dynasty and commit seppuku, so as to let both Anthony Davis and KD/Westbrook into the playoffs.

But, basketball is cruel and these geezers will hoard the seventh seed, and push at least one burgeoning titan off the game's biggest stage.

The Spurs look weak right now, but they've looked weak(ish) heading into the playoffs for the last decade. Calling the Spurs washed-up became an annual tradition, until, of course, the games began to count for something.

Instead, we recognize the Spurs as perennial contenders as long as they have their Big Three, Popovich and a rotating cast of players who, all of a sudden, meet their full potential.

San Antonio is still a top 10 offense and defense, a requisite for championship contention. They're fifth in three-point percentage, sixth in assists and sixth in field-goal percentage. Their blocks and steals are both up from last season, and here's the biggest kicker: They're well-rested.

This season has been a slugfest among contenders. The West has been brutal, and the East is the Cavs' to lose, but even they had to rally back from a slow start. So, top players have logged loads of minutes.

San Antonio knows the regular season doesn't matter, as long as they make the playoffs. While the league's premier teams have been massacring one another and attracting all the attention, the Spurs have been slinking around the edges.

The Spurs have not been the best team this season, but you don't need to be the best to win it all.