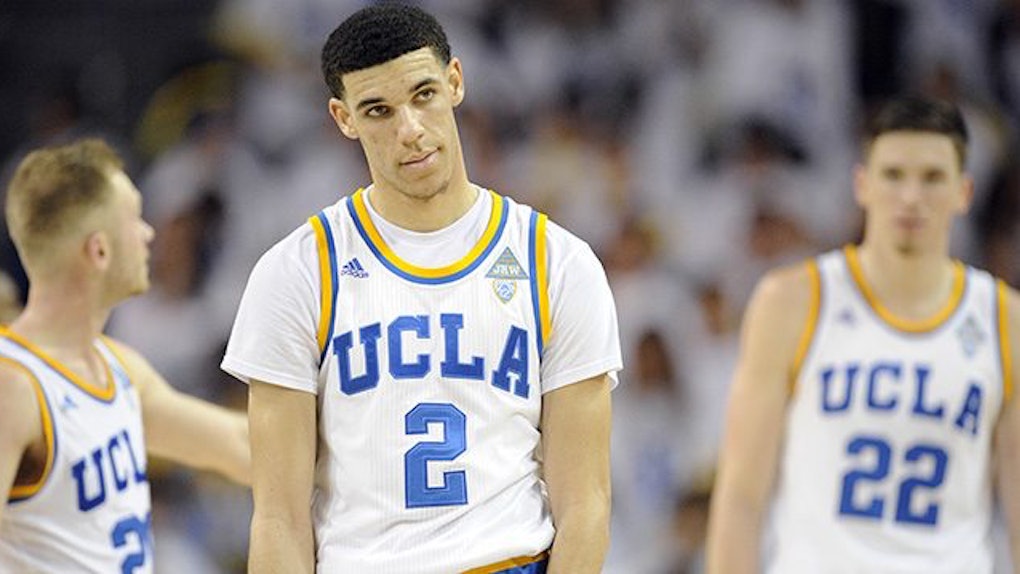 Racism Against White NCAA Players Is Not A Controversy

LaVar Ball did it again.

The father of NBA prospect, Lonzo Ball (and future UCLA players LiAngelo and LaMelo), has created headlines for yet another outrageous comment.

This time, instead of bragging about Lonzo's talent, he threw his son's teammates under the bus.

When asked why UCLA did not win the NCAA tournament, as he'd bullishly predicted, LaVar told the OC Register on Thursday,

Realistically, you can't win no championship with three white guys because the foot speed is too slow.

On Friday, LaVar doubled down on his statement, telling CBS Sports Radio,

But I said prove me wrong that you can't win nowadays with three white guys on the floor at the same time. I'm not saying I don't like white people and white people can't win or nothing like that.

This, of course, is a pretty ridiculous thing to say.

Furthermore, the fact that it came from someone who so many people already think is ridiculous made the overwhelming reaction pretty predictable.

There were few, notable examples of anger aimed at LaVar. Instead, people opted to clown him.

Those jokes are absolutely the correct way to react to Lavar's foolishness. To put it simply: Ain't nobody 'bout to take that man seriously, not on this subject.

His quotes are kind of like Pepsi's gaffe earlier in the week; they were so ridiculous, they're not even worth our outrage.

Speaking of outrage, though, there's another lesson we can take from that conversation and apply it to the subject of LaVar comments about white basketball players.

Never underestimate the amount of people who don't agree with the majority opinion.

I said it once and I'll say it again: Never underestimate the amount of people who don't agree with the majority opinion.

That is to say, it's a safe bet there are people out there who do think LaVar's comments should be a big deal.

Those people probably want to see LaVar get as much criticism as any white person would for perpetuating any stereotype about a black person.

If you doubt those people exist, consider how people tried to bring up #NBASoBlack to troll those who were discussing #OscarsSoWhite.

#NBASoBlack was a sarcastic response, granted, but that sarcasm is rooted in a fundamental misunderstanding of what's actually so terrible about racism.

When black people are viewed as criminals and up-to-no-good, that actually affects how they're viewed by he police, at school and the workplace.

Furthermore, to use an example from sports, when black people are viewed as less intelligent, that actually makes people wonder why more black coaches can't get hired.

Never mind the fact that the stereotype that LaVar is talking about (as stupid as it was to say) is about how a player performs in a game.

That's nowhere near as consequential as the worst that people have to say about other races.

So, what if a white guy made a stereotypical comment, wouldn't people be angrier? The answer is a resounding "hell yes."

Why? Because the stereotype would probably be one that's actually be proven to be destructive for black people've lives for literally over two centuries.

When Lavar says something as consequential as that, maybe the conversation will change. Until then, we'll just stick to throwing these jokes at him.