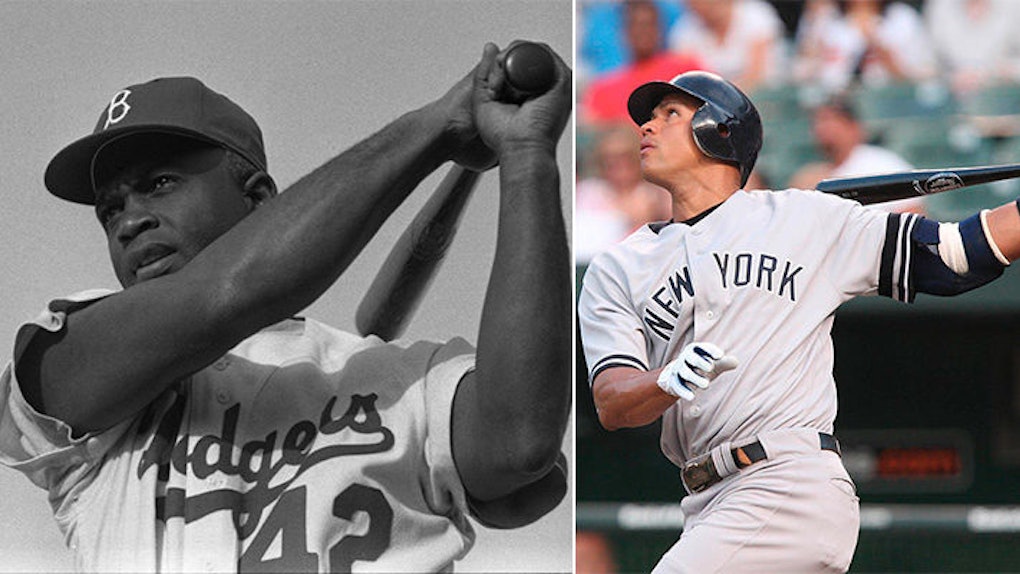 Racism Ruined The Integrity Of Baseball's Records Long Before Steroids Did

In comes the 1-1 pitch, and Alex Rodriguez sends a belt-high changeup deep to center field for the 661st home run of his career, moving him past Willie Mays on the all-time list.

Two weeks later, he turns on an 0-1 breaking ball, lifting a three-run homer over the left field wall at Yankee Stadium, passing both Babe Ruth and Lou Gehrig on the all-time RBI list.

This, arguably, is A-Rod's biggest punishment.

Nevermind his suspensions. Nevermind whether or not the Yankees will pay him his bonuses.

The fact that many fans simply do not care about his, lest we forget, huge milestones is not simply a result of Rodriguez having cheated his way to those accomplishments.

Some will say it is a deserved consequence.

While a baseball villain may be receiving what some feel are his just desserts, sure, it’s still hard for fans to be happy when his consequences have damaged the most cherished part of baseball.

Numbers are the coolest part of baseball. Numbers mean more to baseball than they do to any other sport.

Numbers link all the different eras of Major League Baseball. They form the measuring stick that goes a long way in deciding where each player belongs in the pantheon of greats.

The anticipation of players approaching the most historic and significant numbers in the game was always one of the most enjoyable aspects of being a baseball fan, but not anymore.

Today, you could make a serious argument that the integrity of baseball's numbers has become the greatest victim of the steroid era. After all, how can we determine which milestones are the most prestigious when so many of them have been reached by players who cheated?

But here's something to consider: Baseball's numbers were never legit in the first place.

Long before guys like Canseco, McGwire, Bonds and Braun would ever attract controversy over the use of performance-enhancing drugs, a certain "gentleman's agreement" among big league teams stained baseball's history in ways that are still evident today.

That gentleman's agreement, of course, determined that people of color could not play in the major leagues all the way up until Jackie Robinson broke the color barrier in 1947.

Even when you exclude the idea that millions of aspiring black players never had the chance to fulfill their dreams, and that those aspirants were unable to embark on careers that could have started a professional legacy for those who would come after them, the effect baseball's color line had on the sport is still tragic.

Racism did, in fact, ruin the integrity of baseball's numbers way before steroids did.

The worst thing PEDs have done to the game of baseball is give fans an impossible math problem to solve: How many extra home runs and wins is taking steroids worth?

And when you consider there were no serious penalties for PED use until the mid 2000s, and the fact that some of the greatest baseball minds can argue against how seriously we take steroids today, you might conclude a little extra arithmetic isn't that much of a burden.

The myth-making that says players before 1993 never used anything but tobacco and Gatorade is self-delusion of the highest order. — keithlaw (@keithlaw) January 7, 2014

Whereas steroid use has given fans a difficult question, racism has handed us an impossible one: what if?

What if a black player like Satchel Paige hadn't been prohibited from entering the major leagues for 22 years. Sure, Paige eventually earned two MLB All-Star Game appearances and a World Series, but only after being allowed to play in the league at the age of 42.

How would his accolades have compared to the Sandy Koufaxes and Cy Youngs of the world if he were able to play 20 years earlier?

And what about Josh Gibson?

His plaque at baseball's Hall of Fame maintains he hit over 800 home runs throughout his time playing Negro League and international league ball, all while being prohibited from playing in the majors, of course.

Where would he stand in baseball's hallowed home run record books if he'd not left this earth without ever playing major league ball?

Perhaps Alex Rodriguez would be creating all this fuss over chasing Gibson, instead, had he been the one on top of the home run list.

Those players could be considered two of the most extreme examples brought up in this argument, admittedly, but they indeed represent the greatest tragedy when it comes to statistics in baseball.

Racism, on the other hand, not only denied a huge amount of hopefuls the mere chance to play professionally, it also skewed the record books away from a line of black players.

And make no mistake, baseball's record books were indeed skewed before PEDs ever had an influence.

Racism, after all, is the reason we can't consider the greatest players in baseball's history without then having to imagine which black players would be among the recognized greats.

Ultimately, baseball's statistics need no lamenting. Every era has different contexts that make it hard to compare numbers between one generation and the next, anyway.

But if you'll lament anything about the integrity of baseball's numbers, lament the fact that racism ruined it long before steroids ever could.