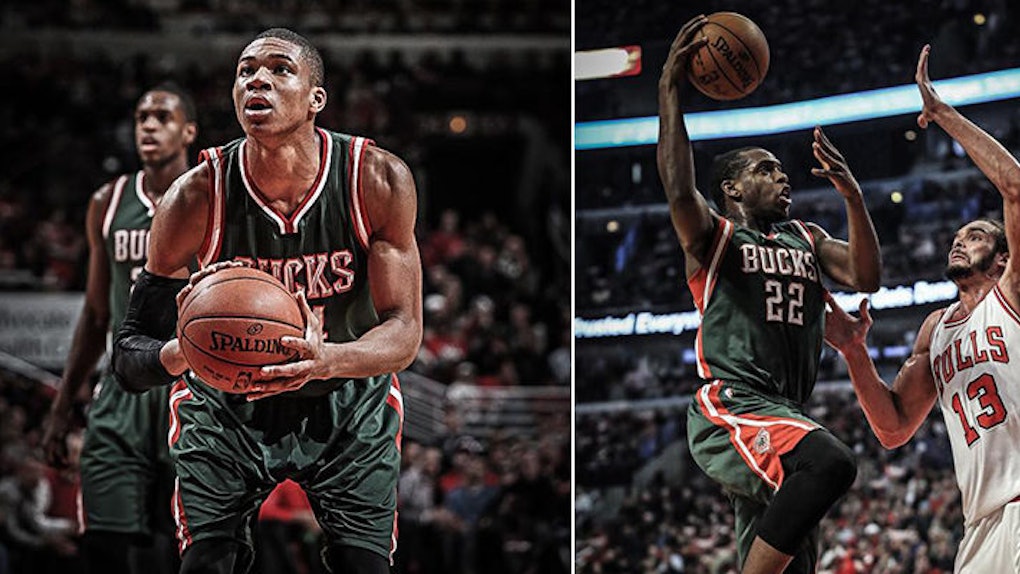 Just a few short seasons ago, Milwaukee was the worst team in the NBA.

Other teams were purposefully losing to secure higher draft picks, but Milwaukee appeared as though they were actually trying to win, albeit still losing.

After hitting a couple of their draft picks right on the money in Jabari Parker and Giannis Antetokounmpo, Milwaukee had its two young stars to build around for the future.

The Bucks took a giant step forward in the 2014-15 season by making the playoffs as the Eastern Conferences sixth seed. They won two games against a much more talented Chicago Bulls team, before ultimately falling in six games.

Making the playoffs meant Milwaukee was not selecting from the lottery in the 2015 NBA Draft, but the franchise got great value from the 17th pick by selecting UNLV's Rashad Vaughn.

Vaughn was one of the youngest players avaliable in the draft, and has the ability to score in a number of ways when he is put into games for what will assumedly be relief minutes for Parker. He adds another young asset to the team's already-young nucleus.

In the past, the draft is normally where teams from small markets like Milwaukee have had to build their franchise from.

Free agents have historically opted to leave the teams that drafted them after their first contract expires for the bright lights of cities like Miami, New York and Los Angeles.

As social media and the reach of the Internet continues to expand, more and more players are opting to stay put or sign with a contender, recognizing there is opportunity to build their personal brand from anywhere through such mediums as commercials, Twitter and YouTube.

It is this new realization by players that led to the Milwaukee Bucks making more noise during this year's free agency period than both the New York Knicks and the Los Angeles Lakers.

There were surely many eyebrows raised when the new contract of Bucks forward Kris Middleton was announced. Middleton opted to stay in Milwaukee in order to receive $70 million over the next five years.

Though he does not have the same name recognition as some of the other free agents this year, those who have watched Middleton play know he is worth every penny of his new contract.

The 23-year-old is a very versatile defender. His length and quickness allows him to guard four different positions, while his offensive abilities remind me of former Pistons great Richard “Rip” Hamilton.

With Middleton, Parker, Antetokounmpo, Vaughn and point guard Michael Carter-Williams, the Bucks have a core that is very young, very long and very versatile on the defensive end.

Carter-Williams is a great distributor and solid off the dribble, but a sub-par shooter. It's a skill set that makes him an ideal fit to run the offense of a team filled with catch-and-shoot guys.

Then you have the move everyone is talking about: the signing of free agent Greg Monroe to a three-year deal with $50 million.

Monroe's play in Detroit has been overshadowed the past few years by Andre Drummond's highlight dunks, Brandon Jennings' heat checks and many, many losses, but the 25-year-old was quietly one of the most effective big men in the league, averaging a double-double last year for the Pistons.

His relative youth makes him a perfect fit for a young team looking to grow and develop, and he gives the Bucks the one thing they still needed: a legitimate low-post threat.

It isn't as though they just went out and got a big body to eat space and fight for rebounds, either. Monroe is a highly skilled big with the ability to pass out of double-teams, finish using a soft touch and knock down free throws. (He shot 75 percent from the line last year.)

In the weak Eastern Conference, the Bucks now have the pieces to build upon their playoff appearance last season. They now have more size, more depth and more talent.

The youth of the team also means their upcoming success will not be just a flash in the pan, as they should be able to sustain it for years to come as the team grows up together.