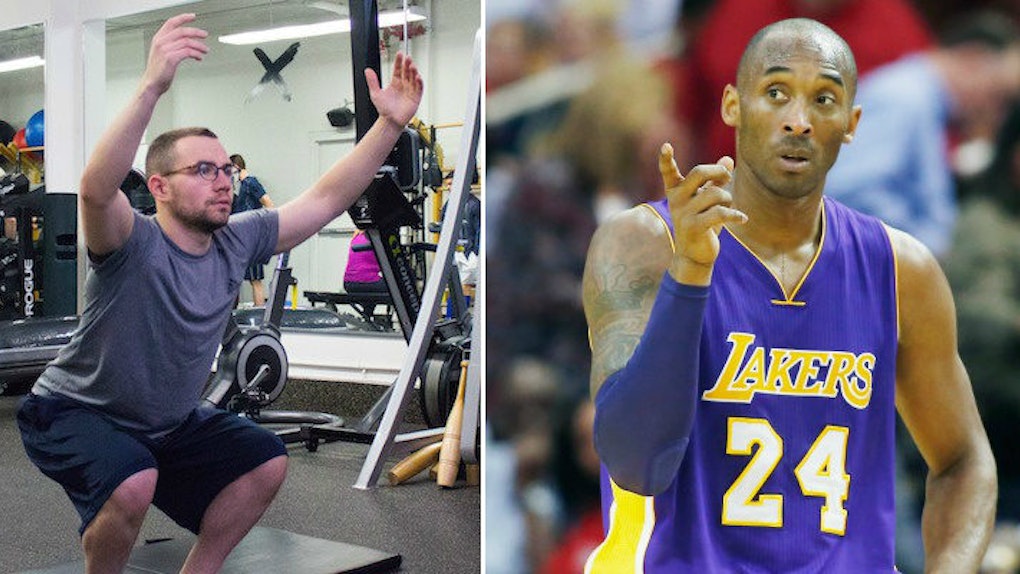 Fusionetics is a performance technology platform that allows you to test, score and create evidence-based programs for athletes that are specifically defined to help [them] reduce the risk of injury, optimize their performance and enhance their recovery.

This is what Dr. Micheal A. Clark, founder of the National Academy of Sports Medicine and CEO of Fusionetics, told me. Now, that's all well and good for someone like Kobe Bryant, but I wasn't so sure about a 26-year-old, short white dude who has a desk job and considers a 20-minute walk to the train a workout.

Nonetheless, after already freezing my body in the name of science, I figured it was my journalistic responsibility to see if I could at least attempt to stumble through the revolutionary performance and recovery method that's helping everyone from college athletes to 37-year-old NBA stars compete at their peak performance level.

As I walked up the steps to Manhattan's Independent Training Spot, I wasn't quite sure what to expect.

I had already interviewed Dr. Clark and learned how Fusionetics came about and what it's supposed to offer users, but I still had no idea what it would actually be like to experience.

My initial conversation with Rick Richey, MS, LMK owner of Independent Training Spot, was pleasant and easy-going; he said we were going to keep it pretty light that morning.

OK, time to see what this Fusionetics thing is all about.

I guess we all have different definitions of the word "light."

First, Rick asked me to perform a series of squats, pushups and other drills, so he could measure my range of motion and recovery and readiness.

I didn't need to see the numbers on Rick's computer to know I wasn't anywhere near perfect on my squats. Soon enough, though, I would be shown my personalized Fusionetics diagnostic, which not only pinpointed my squat and pushup shortcomings but isolated the body parts responsible for my poor form.

After seeing the data in the program, I started to make sense of a lot of the big words Dr. Clark hit me with in our earlier interview. A few days before I tried for an hour to do what Kobe Bryant does daily, Dr. Clark told Elite Daily,

The principles of PT (physical therapy) are great, [but] the way it's typically and traditionally applied in the real world setting, is it doesn't bring about all of the benefits that really could benefit an athlete or any active individual. If someone comes to me, and they have left knee pain, why do they have left knee pain and not right knee pain? If they're an athlete, they use both of their legs. We need to really learn about the human movement system, which looks at functional anatomy, functional biomechanics and neurophysiological principles.

After the squats and pushups came a series of tests for the range of motion of my shoulders. With my back flat against a wall, Rick had me make several movements to see just how far I could go.

Yes, during the entire 60-minute session, I imagined myself as Kobe Bryant going through this program, only the further we went, the more I realized I wouldn't last a day in the NBA, and that's without even a sniff of an actual basketball or court.

The exercises were done. I knew I didn't score so hot. Rick then instructed me to lie down on a trainer's table, where, even though I didn't know it at the time, I was about to experience the uniqueness and unbelievable difficulty of Fusionetics.

Now that Rick knew where exactly my problems and limitations were located, he was going to put me through a series of stretches in order to hopefully see an instant increase in my range of motion (ROM).

As both Rick and Dr. Clark explained to me, part of the beauty of Fusionetics is its intended ability to increase ROM by up to 30 percent in a very short period of time.

If we don't see an increase after the stretches and tweaks, Rick said, then we have a problem.

After just a few minutes of Rick working on my body, I was praying to every god and deity I'd ever heard of that we'd see an improvement. You know how sometimes you get a massage and it hurts at first, but then it feels really, really good?

I was in serious pain as Rick found and worked on muscles I never knew existed. Sh*t, as I sit here three days later writing this, my left leg is still sore as hell.

With each new stretch and muscle maneuver came Rick's measurement of my flexibility. Luckily, his work produced some significant gains across the board.

One of the hardest stretches Rick put me through involved my leg being buckled in via a seatbelt. He used his own strength and bodyweight to loosen up my muscles and increase my range of motion.

While reading this, you may be wondering why folks like Kobe Bryant were willing to give Fusionetics a shot in the first place. Dr. Clark attributes this in large part to his time working with the NBA's Phoenix Suns. His program helped the likes of Grant Hill and Shaq prolong their careers.

Hill told Kobe, who told others and, well, you see where this is going.

Dr. Clark expanded on what separates Fusionetics from similar programs in the industry. He told Elite Daily,

There are a lot of other testing-type programs out there, but the biggest thing for us is we're trying to identify any impairments you might have in your body that prevent you from performing at the highest level or prevent you from recovering and not breaking your body down. The most important thing is then creating a targeted plan for you on what you should be doing before any type of activity, then giving you a targeted plan based on your goal for performance and fitness training. Post activity, giving you a very targeted plan for recovery and readiness.

After doing another round of squats and pushups, which did indeed show an increase in my ROM -- thank god -- my first Fusionetics session was over. I was so exhausted, I wanted to take the rest of the day off. It was 10 am.

I changed clothes and thanked Rick for taking the time to walk me through all the testing, treatment and implementation. I now have a Fusionetics profile where I can see my test results and the targeted, customized program, which I can now do on my own or at a facility with a practitioner like Rick.

After this process, I can't help but think how hard it is for athletes like Kobe Bryant to stay at their peak physical conditions and drop 30 points a night.

Kobe may not be the basketball player he once was but thanks to Fusionetics, he's at least walking away from the game under his own power, rather than limping off into retirement.