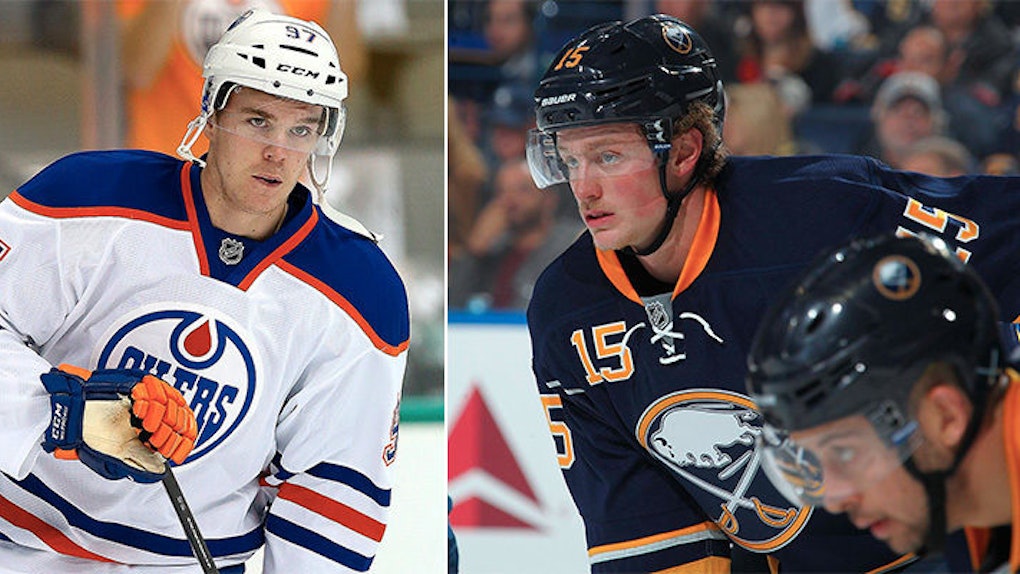 Jack Eichel Will Be Great, But The Future Belongs To Connor McDavid

It’s Canada versus the United States.

It's the Edmonton Oilers' Connor McDavid against the Buffalo Sabers' Jack Eichel.

With the 2015-2016 NHL season underway, all the hype between the two most sought after prospects in recent years is finally coming to life, as the two are finally settling into their new hockey homes.

Both McDavid and Eichel have been through their first few weeks in the NHL, and both have already proven their skills. Both centers have already put up points, and even scored goals.

Both had a lot of talk about them this offseason.

They were talked about throughout last season, as well. Topics such as their immense hockey-IQ, abilities to extend plays speedily with their hands and work ethic make them generational players with the ability to change hockey for the better.

McDavid is often compared to Crosby, one of the all-time greats.

But that shouldn’t shadow the high level of skill Eichel brings to the table because it's starting to become a story of who's better, and who will grow more over the next few years.

When it comes down to it, their personal skill and ability to adapt to the NHL's faster pace and increased physical play will go a long way, but your resources play just as big of a part.

Who your coach is and the players you work with are vital to any player's growth.

The problem with being such a sought after prospect, is that you find yourself landing in cities that are home to struggling teams. And it is notable that both Buffalo and Edmonton have struggled badly for the past few years.

The Oilers have not made it to the playoffs for nine years, and the Sabers lost in the first round half a decade ago.

But in the offseason, both of these franchises made moves that will not only strengthen the teams, but also help McDavid and Eichel develop into outstanding players.

Notably, the Sabers went out and signed Evander Kane and Ryan O’Reilly, both very good forwards to add to their offense for this season.

Out west, the Oilers signed defensemen Andrej Sekera to tighten up their blue line, and Cam Talbot, who backed goalie Henrik Lundqvist for the Rangers last season.

Talbot, however, got valuable starting time while Lundqvist was injured and proved he could hold his own as a starter. Both teams also have new coaching behind the bench, and both have lengthy experience and admirable success in the NHL.

Stanley Cup winner Dan Bylsma heads the Sabers this year, and he had success in Pittsburgh prior to coming to Buffalo. He led the Penguins to six straight playoff appearances.

The Oilers are coached by Todd McLellan, who saw success with the Sharks appearing in the playoffs five out of six years, only to miss last year, which ultimately led to his arrival in Edmonton.

So, with all the movements in the offseason, and the impressive play so far, who seems more likely to develop into the next NHL superstar?

While many may say this is a "no duh" prediction, considering all the hype surrounding him with his time in the OHL, Eichel has the same amount of skill and brings just as much to the table as McDavid does.

However, with the first few weeks in the books, McDavid has shown more potential to become a lethal player on both sides of the puck.

His transitional play, especially from defense to offense, is next to none. He is able to move the puck from his zone through the neutral zone with speed that is uncanny for a 19-year-old.

In fact, everything he does would be uncanny for half the players in the NHL.

His ability to get position with his body is remarkable and add to his chances to score, on top of having top notch puck handling skills and speed that already generate many chances for him.

His high-level hockey IQ, paired with his young age, allow him to see different sides of the game. It's almost like he knows how a play will develop before it even happens.

He knows where he needs to be at all times, especially when it comes to the offensive zone. He’s able to locate these holes in the defense that give him prime scoring opportunities.

His most impressive skill, however, is how he uses these abilities to generate chances for his teammates.

He's always in position, and even when he’s not, he knows what to do to get his hands free and the puck to an open teammate.

His presence on the ice is always felt by the opposition, and he’s very good at making it known that he is a dangerous player. His skills and awareness while on the ice will help him become a powerhouse offensive threat in the next few years.

McDavid has the advantage in the resources aspect, as well.

Each of these players has years of experience under their belts, and are all top notch players.

When Eberle returns, it would seem like he would enter on the left of McDavid on the second line. But that’s not for six more weeks. For now, Benoit Pouliot sits on McDavid’s left. To his right, there's Yakupov.

Playing with players like these will surely help McDavid develop great habits and skill down the road, and when Eberle returns, it will only get better for him.

Eichel, on the other hand, plays with Evander Kane and Jamie McGinn. Kane is a big body and an experienced player who will help Eichel develop.

The problem with Buffalo is you still see a relatively young team, where most of these players are playing with each other for the first time. This leaves Eichel jumping into a system where all of his teammates are just as new to each other as he is to them.

McDavid has the comfort of knowing that many of the offensive stars on Edmonton have played with each other for multiple years.

It's no question that both Jack Eichel and Connor McDavid are on a path to stardom.

McDavid, however, is on the right path to elite status, given that he has a team capable of taking him there and has proved himself in his first few weeks with his outstanding play at such a young age.