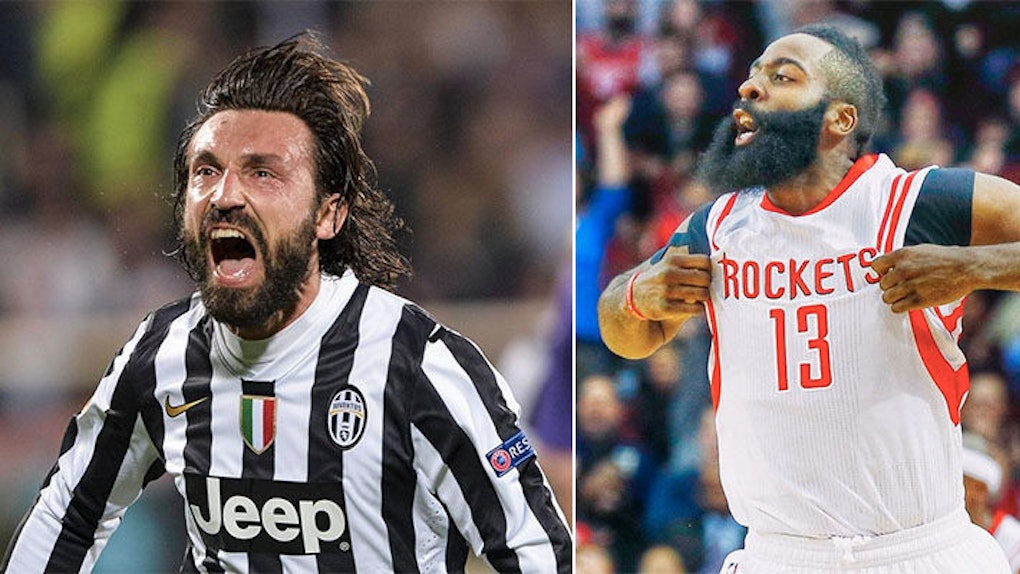 You've heard it before: Fear the beard!

But this rallying cry isn't exclusive to fans of the Houston Rockets and James Harden.

No, from the time Samson was killing lions and single-handedly slaying entire armies, hair has always been seen as a sign of dominance and success.

While Bible junkies maybe quick to point out Samson's strength technically came from his hair, and not from a beard specifically, he most definitely had a crazy-strong facial hair game to go with his legendary locks.

We know Samson and James Harden have epic beards that match(ed) their successes on the court and in the battlefield, but there have been a host of other bearded ones who found dominance with brazen bristles.

In fact, a look around will prove if your opponent has stubble, you are most definitely in trouble.

The New York Yankees are on top in the AL East thanks to Brett Gardner's mustache trend.

Since Yankees outfielder Brett Gardner and several of his teammates started donning mustaches in mid-April, the Yankees have shot to first place in the American League East. Coincidence? FOH.

James Harden is living proof that once you set the beard free, there's no catching it.

James Harden's rise from Arizona State University to the Houston Rockets goes hand-in-hand with the growth of his impressive beard.

Seriously, this timeline proves that with each step in Harden's progression as a basketball player, his beard has grown, too.

Now, the runner-up for the 2014-2015 regular season MVP award has his team four wins away from a trip to the NBA Finals.

Wonder how Durant and Westbrook feel.

Hunter Pence looked more like a pirate than a ballplayer in 2014, but did he ever mash.

San Francisco Giants outfielder Hunter Pence is a nine-year MLB veteran. And while he's always been a solid performer, he never had a season like 2014.

Not only did he play in all 162 regular season games for the World Series champs, he had a postseason batting average of .444 and a .667 slugging percentage. You know what else he had? A wicked beard.

Speaking of the Giants, 2014 World Series MVP Madison Bumgarner clearly had no reason to use a razor.

In addition to capturing the most regular season wins of his career in 2014 (18), Bumgarner went on to have one of the greatest postseasons in sports history.

In the World Series, Bumgarner recorded a 0.43 ERA, to go along with 17 strikeouts in 21 innings. Behold the magic of the beard.

You think that ill genie beard got a Super Bowl ring, too?

The 2004 Boston Red Sox were the OG beard champions.

Branded as “idiots” by those inside and out of the clubhouse, the 2004 Boston Red Sox banded together through the commonality of beard growth.

It began by becoming the first team in MLB history to erase a 3-0 deficit when they beat the clean-shaven Yankees in the ALCS, and ended with the bearded bunch hoisting a World Series trophy in St. Louis.

The Sox also grew out their facial hair in 2013, and wouldn't you know it? They won it all again.

It may have been a different cast of characters, but the result of growing lengthy beards deep into October yielded the same result: another World Series ring.

Andrea Pirlo and his mane have concurred Italy, Europe and the hearts of women everywhere.

In addition to being one of the best deep-lying playmakers in all of soccer, Pirlo's also proved his lush beard is a fountain of youth.

Despite being 36 years old, Pirlo is set to lead Juventus into the 2015 Champions League final against Barcelona on June 6.

The likes of Duncan, Ginobili, Leonard, Green and Belinelli all had facial hair during last year's run to the NBA title.

Sure, Parker kept it clean cut, but when a majority of the crew is rocking the IDGAF look, you know it's no fluke.

LeBron, D-Wade and Chris Bosh propelled the Heat to the 2013 NBA championship, but it was the suave facial hair that propelled them to greatness.

Belinelli and Ginobili could probably use the number of one of the big three's barbers.

From grabbing the most skilled catch in NFL history to winning the Madden cover vote, OBJ, like his beard, is growing.

Giants wide receiver Odell Beckham, Jr. had a rookie year to remember. After missing the first four weeks of the year from injury, the 22-year-old managed to finish with 1,305 yards and 12 touchdowns.

He also had that catch against the Cowboys on Sunday Night Football and was selected to be on the cover of Madden 16.

Hopefully his young career continues to grow like that distinct beard he's got going on.

Brian Wilson's 2010 was a season to remember, so was his beard.

In 2010, then San Francisco Giants closer Brian Wilson finished the regular season with 48 saves, 93 strikeouts and a 1.81 ERA.

He also cultivated one of the gnarliest beards in the history of facial hair. Seriously, did this thing need a separate seat on flights?

Wilson finished the postseason with 16 strikeouts in 11.2 innings, as well as a giant World Series ring to go with his beard.

2014 Conn Smythe winner Justin Williams had a beard with some serious weight to it.

It's widely known hockey players -- and fans -- participate in the annual tradition of growing a playoff beard. The further the team goes, the longer the beard gets.

If that's not the beard of a champion, I don't know what is.

It's pretty much scientific evidence that the Oakland Athletics won the 1972 World Series as a result of the team rocking some pretty sketchy-looking mustaches.

We know this because the A's hadn't won it all since they were the Philadelphia Athletics in 1930, as well as the fact that the '72 championship was the first of back-to-back-to-back titles.

Chuck “The Iceman” Liddell has the most knockouts in UFC history and a sharp goatee game.

Starting with a victory over the favored Randy Couture in 2005, former UFC Light Heavyweight champion Chuck Liddell held his title for 770 days.

And during his 29-fight MMA career, The Iceman set the record for the most knockouts in UFC history with 13.

Liddell consistently rocked the goatee throughout his career.