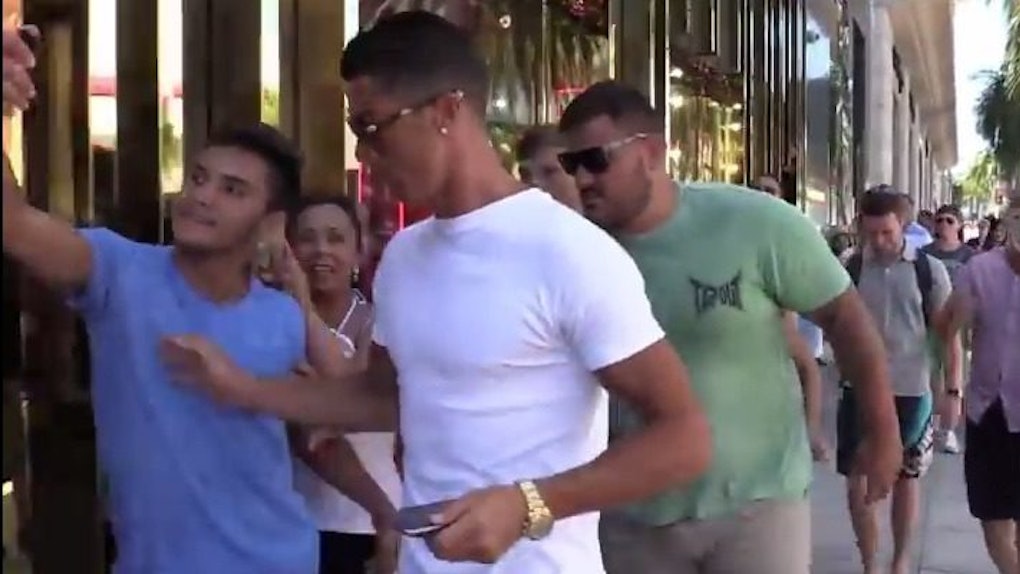 Cristiano Ronaldo Straight Up Shoved A Fan And There's Video

Look, if I were Real Madrid striker Cristiano Ronaldo, I'd also probably be pretty pissed if fans started mobbing me for pictures and autographs when I was just trying to get my high-end shopping game on, but shoving some kid out of the way probably wasn't the best way to defuse the situation.

As you can see in the video above, Cristiano Ronaldo was shopping on Rodeo Drive on Wednesday in Beverly Hills.

Well, obviously word started to spread of Cristiano's public shopping exploits, and it wasn't long before seemingly all of Beverly Hills came out to try and get a photo of the Portuguese superstar.

Ronaldo had a pretty standard entourage with him, complete with a giant dude -- who clearly makes more than I ever will -- tasked with keeping Ronaldo safe from harm.

One persistent young CR fan was determined for a selfie, but Cristiano Ronaldo had other ideas. About 43 seconds into the above video, you can see Ronaldo actually shove this fan to the side as he's trying to get a picture.

Again, I understand Ronaldo's desire to shop in peace, but you have to acknowledge your fans when you're arguably the most popular athlete on the face of the planet.

Plus, you just won the Euros, fam. Lighten up.