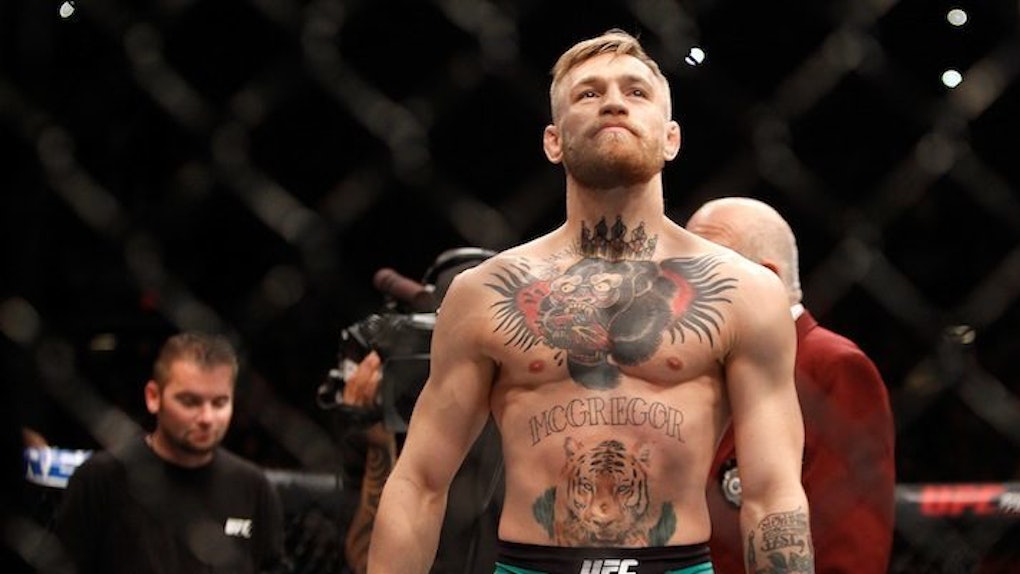 Why Conor McGregor Actually Has A Shot At Winning Three Belts

It sounds impossible until you look at the official rankings for the UFC's featherweight, lightweight and welterweight divisions.

McGregor is a striker who, as his fight with Chad Mendes confirmed, is significantly disadvantaged when faced with a wrestler. Therefore, the fighter to hand McGregor his first UFC loss will likely possess an extensive background in wrestling and/or have won several fights using this subset of MMA.

That fighter will also preferably not have a tendency to take a considerable amount of damage on the feet since McGregor needs just one punch to end the fight.

But the lists of the top 10 fighters in the aforementioned divisions suggests these weight classes are actually experiencing a shortage in fighters with these qualifications.

All of these divisions contain great strikers but, much like the Anderson Silva of days past, the idea of McGregor losing a stand-up war or getting knocked out in the prime of his career seems highly unlikely.

When McGregor versus Rafael dos Anjos was first announced, it's safe to say many who picked the Brazilian to win did so because of the dramatically improved wrestling he displayed against Anthony Pettis.

But out of these three divisions, there appears to be just three accomplished wrestlers who don't get hit a lot. Those men are featherweight Frankie Edgar, lightweight Khabib Nurmagomedov and lightweight champion Rafael dos Anjos.

The featherweight division boasts confident wrestlers like Chad Mendes, Ricardo Lamas and Dennis Bermudez. All three of these men, however, were beaten by strikes in their most recent losses.

Mendes has already been knocked out by McGregor and was unable to protect his chin, once again, in December. Lamas' two latest wins can more so be attributed to accurate striking, but if he couldn't avoid the hands of Mendes last spring, he probably won't fare too well against McGregor. And Bermudez's grappling could only temporarily neutralize Max Holloway and Jeremy Stephens.

In the next weight class up, Eddie Alvarez recently wrestled his way to the biggest win of his career over Anthony Pettis. But this fight was extremely close, and Alvarez took many hard shots along the way. Alvarez's wrestling also didn't look anywhere near as threatening as that of Nurmagomedov and dos Anjos.

The best grapplers at welterweight are arguably Johny Hendricks and Demian Maia. Hendricks, however, failed to take down Stephen Thompson or Robbie Lawler enough to win his last two most important fights.

Maia's takedowns have looked great, but he's only been able to overcome mid-tier fighters, and he took a lot of punches against Rory MacDonald.

As for MacDonald, his wrestling only seems like a secondary aspect of his game since he apparently prefers to spend most of the fight on his feet.

Given the UFC's high population of wrestlers, it seems odd for the lightweight and welterweight divisions to be dominated by stand-up fighters. When was the last time one would be hard-pressed to find at least two truly imposing wrestlers at these divisions?

The majority of the UFC's other divisions don't have this deficiency.

Chris Weidman, Jacare Souza and Gegard Mousasi are just a few of the top middleweights who possess fantastic wrestling skills.

If Conor McGregor thinks he can win three belts, it's probably because there has never been a better time for a uniquely talented striker to do so.

Right now, he has just two men to worry about at lightweight, one at featherweight and the welterweight division no longer has Georges St-Pierre.

The latter division is ruled by Robbie Lawler, a striker who likes to brawl and came very close to being finished in his last two fights.

One can't blame McGregor for thinking he can out-strike the welterweight champion. Alvarez, Hendricks and Maia may need to drastically step up their game if they don't want McGregor to think he can embarrass their divisions.