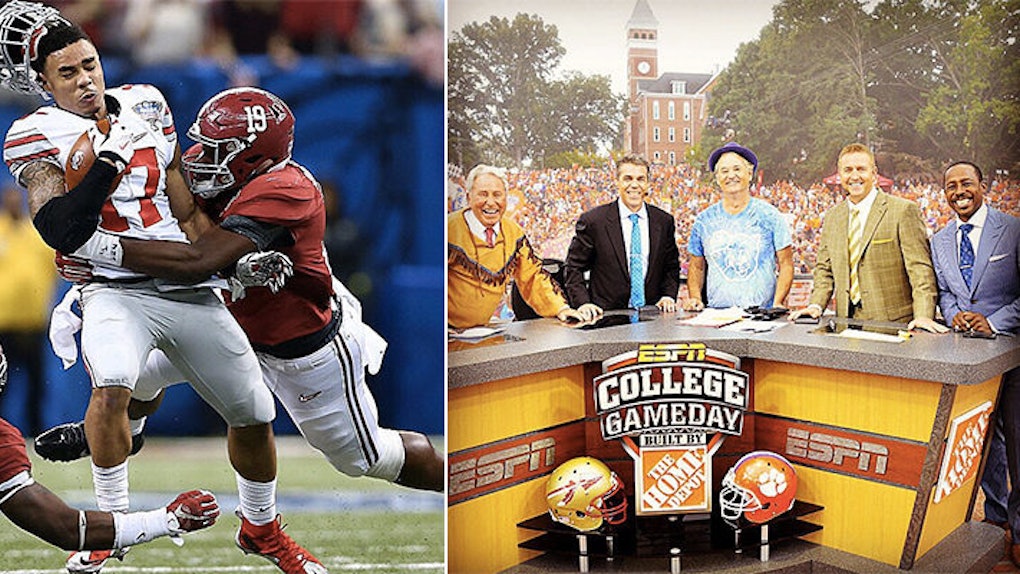 8 Reasons Everyone Can't Wait For College Football Season To Return

I'd imagine Saturdays filled with day drinking, tailgating and the potential of Lee Corso dropping F-bombs on College GameDay are enough to get the average fan geared up for college football this fall.

But, in case that still hasn't sold you, here are the top eight reasons to be excited for the start of this season:

Although the Buckeyes rebounded and ultimately took home the coveted national championship title, the sole loss in the W-L column is enough to make this season's Week 1 opener the game to watch.

The whole Jameis Winston crab legs piece got a little stale. With Jameis Winston and Marcus Mariota off to the pros, there are new names to watch on the field this fall.

Specifically, keep an eye on Christian Hackenberg (Penn State) and Notre Dame transfer Everett Golson (Florida State) at the quarterback slot, as well as those still vying for the starting QB role at Ohio State.

Charlie Strong enters his second year at Texas, and James Franklin is heading into year two at Penn State. Both programs are traditionally dominant, but they have recently suffered significant setbacks.

This season will serve as an indication of which direction their respective programs are moving, and whether or not they are once again on the rise.

Each new season brings an upset opportunity of epic proportions.

Think Appalachian State vs. Michigan in 2007, where Wolverine fans stood stunned by a team they likely didn't even know existed prior to purchasing game tickets.

Long-Standing Coaches on the Rebound

Household names Les Miles, Steve Spurrier and Kirk Ferentz have collectively been coaching their current programs for over 35 seasons.

In addition to their shared longevity in tenure, they each ended 2014 with disappointing records.

Their respective fans will be eager to see what results these coaches can produce this year.

Few would have imagined that a third-string quarterback would dismantle Wisconsin in the Big Ten title game before leading his program to a national championship, but that's what Cardale Jones accomplished last season.

This year's breakthrough players and programs are yet to be seen.

Unlike past seasons of one conference leading the charge, this year's preseason rankings tell a different story. Multiple teams from the SEC, Pac-12, Big Ten, ACC and Big 12 are fighting for a place in the spotlight.

While Ohio State is being touted as the national favorite, the top spot in most conferences is up for the taking. Even the SEC and ACC, which have been dominated by Alabama and Florida State respectively in the past few seasons, are far from runaways.

Both Baylor and TCU, arguably snubbed in last season's playoff slots, return to the field this season ready for redemption.

The additional one-game roadblock on the path to a national championship ups the stakes across conferences, and it grants four teams the opportunity to seal their own fates.

Football season serves an excuse to wear sweatpants, eat nachos, gamble and flip to something other than baseball. Isn't that reason enough to get pumped up for opening weekend come September?