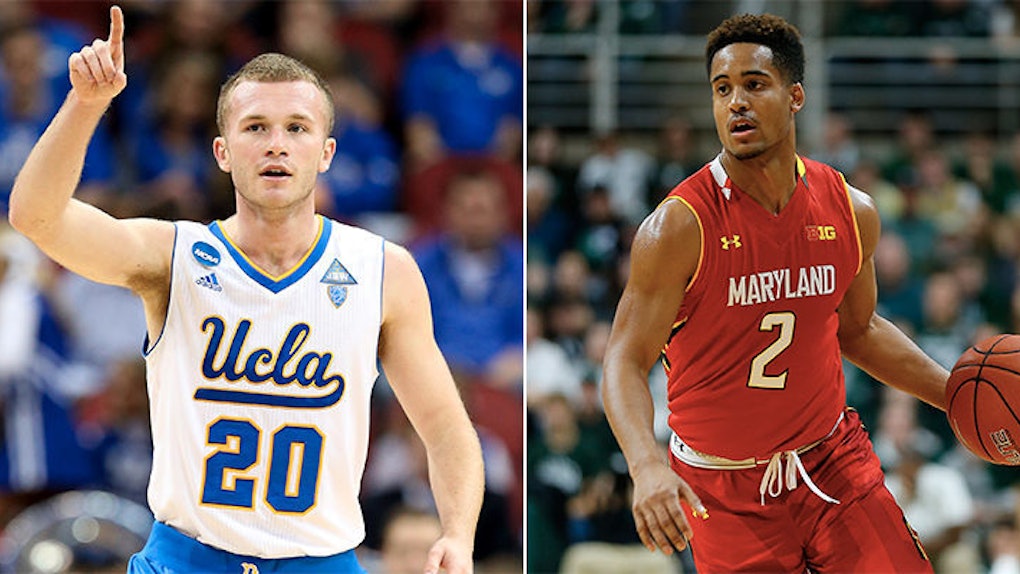 In a season characterized by undeniable parity across the country, a few players are making their mark early on as the crème de la crème.

There's a very slim margin separating the top two or three point guards from the rest of the group.

It's tempting to say the 6'3" senior has underperformed during his time at G-Town, but that's only because of the high expectations that were placed on him since he matriculated to DC from highly-acclaimed Oak Hill (Va.) Academy.

Smith Rivera is a solid player, nonetheless, and has been from the time he stepped on campus.

As the leader of a very good Hoyas squad, he's averaging over 15 points per game so far this year, and is looking to go out with a bang as Georgetown will contest for a Big East title.

The O'Fallon, Illinois native is hardly a point guard by trade.

He's a three and a four that can match up with a five. Jones makes the list for his defensive presence as much as offensive marketability.

Certainly not the quintessential college point guard, Jones can step in an run the show with a kind of style that is only his.

The guy looks like a football player in a basketball uniform. But uses his strength and skill around the hoop to make tough layups and floaters when the dawgs need them most.

Talk about top guards in the Big 12, Morris leads that category.

Iowa St. has been a top-tier team the past couple years, largely due to his leadership, scoring and assist ability at the point guard position.

This year, he leads the team in assists, and is surrounded by a good cast of characters, which will help him become a better playmaker and passer.

Perrantes is just a grind-it-out, veteran guy who can get in the lane or shoot it with the best of 'em.

When he's hot, look out.

The 6'2" junior draws so much attention because of his creativity with the basketball that it opens up opportunities for others around him.

I picked UVA to win it all last year, and they might be an even better team this year.

Along with his counterpart in Malcolm Brogdon, Perrantes leads one of the best five there is this year.

The Cleveland State transfer who previously led the Vikings in scoring is really more of a combo guard than a pure point.

But he's included in this list nonetheless because he's one of the better guards in the country that no one is talking about.

He's starting to come on for Pitino this year at almost 13.4 points per game. But based strictly on the eye test, this is one of the prettiest play makers we've got.

Arch has been around forever, or so it seems. Likely because he's gotten significant playing time ever since his freshman year at Nova.

A Coplayer of the year in the Big East, you get the feeling this Wildcats team is his.

The guy can fill it up, and his proverbial "in the gym range" makes him very difficult to game plan against.

I think when all's said and done, Miami will be a top 10 basketball team.

Angel Rodriguez has been making noise for a couple years, and it's showing bright this year. A top level guard on a top level team I'm choosing to win the ACC.

More than anything, Rodriguez makes things around him happen. He can nail the long range jumper, and get in the lane and score.

He fits into the Miami system perfectly, and as a veteran leader, knows how to win.

A lot of people would rank Ulis higher on their lists, and many would also include his teammate Freshman Jamal Murray in the conversation.

He's one of the most crafty guards in the nation, and has to be due to his undersized frame. Man can this guy fill it up, though. His quickness combined with his craftiness makes him an absolute pleasure to watch. And he's very efficient.

You won't see Ulis making a bunch of unnecessary moves -- he gets where he's going, and makes the right play almost every time.

He's a winning guy on a winning ball club, despite being the smallest guy on the court.

Ferrell, now a senior, has a certain savvy about him. He seems to just ooze the perfect mixture of experience with silky ball handling with lights out shooting.

With a good combination of strength, basketball IQ and skill, in his four years at IU, Ferrell has become an absolutely complete, multi-threat guard.

Another veteran on the list, Van Vleet's best asset is his dribbling and ball handling skills.

This allows him to pass with the best of them.

He's the best guard in the Missouri Valley Conference, and is certainly the Shockers' go-to playmaker.

I'm not sure you could think of a better guy to have the ball as the clock's ticking down when you need a deuce.

Van Vleet has made himself into a complete point guard on a Wichita St. team that can no longer be ignored or considered a mid major.

Jackson is one of the premier play makers in the country this year.

From an athleticism standpoint, you'd be hard pressed to name other guys on one hand who are as athletically gifted.

Jackson can absolutely explode off the dribble, and he's most dangerous when he can penetrate in the lane and either rise up for a huge slam or find a unique angle to make baskets.

This is a guy who can distribute the rock just as easily as creating his own shot.

Though his shooting form seems slightly unorthodox, don't let it fool you.

Paige is perhaps the best big shot maker in the ACC.

He has nerves of steel, and is exceptionally crafty with the basketball. This is a guy who very rarely makes the wrong decision.

His experience has also bred a certain toughness making him very hard to bother for long. You can count on consistency and hard play from Paige.

He isn't the biggest guy in the world, but he uses the gifts he has to perfection to become a very good collegiate point.

If you've watched any UCLA basketball this year, I don't know how you could leave this kid out of the top five.

I'm not sure how he's missed a lot of the other top rankings I've seen, but it's a crime he isn't being talked about more.

I haven't seen any guard yet this year with the pure point guard skills, flash, and quickness of Alford, especially with the ball in his hand.

He's consistently leaving defenders behind him and just seems to be moving at a different pace than others.

He stays under control, and almost looks like he prefers to shoot the three ball with a hand in his face.

You can trust that he's not getting his PT just because his dad is his coach.

Alford is an absolute "diaper dandy" who takes and makes big shot after big shot. He has one speed: go.

He actually reminds me a lot of reigning NBA MVP Stephen Curry.

Watch for him to contend for the Pac 12 Player of the Year award when all's said and done.

He's the Pre-Season POY in the Big East and puts on a show every time out.

Perhaps the most NBA ready guy on this list right now, Dunn has added some muscle this offseason which has added some strength to his already explosive game.

He reminds me a lot of John Wall in terms of playing style, body type, and ability to get to the rim. He's flashy. He's smooth. He's a tough shot maker, and he's used to putting teammates in a position to succeed, also.

I actually think Dunn's best asset is his explosiveness or leaping ability.

He can rise above to grab a big rebound, or, more often than not, make a tough layup or dunk over other players.

He could be the most athletic on the list, but as highly acclaimed (and rightfully so) as Dunn's game is, he isn't the best pure point guard in the nation.

The honor of the best point guard this year belongs to Maryland Terrapin's sophomore Melo Trimble.

Quite frankly, I can't recall the last time I saw a more complete point guard than Melo.

He has the whole package, and there's just no doubt about his game: the handle, the long distance shooting, the ability to get past guys and get in the lane, the passing ability, the creativeness, the supporting cast of characters, the confidence, the swagger, the smile, the winning attitude.

The unbelievable consistency with which Trimble knocks down huge shots when his team needs them most is incredible.

He's able to step up in big time situations and take over the game.

And, in my opinion, there's no more valuable trait in a point guard than being able to make big plays that change the course of a game or "take it over."