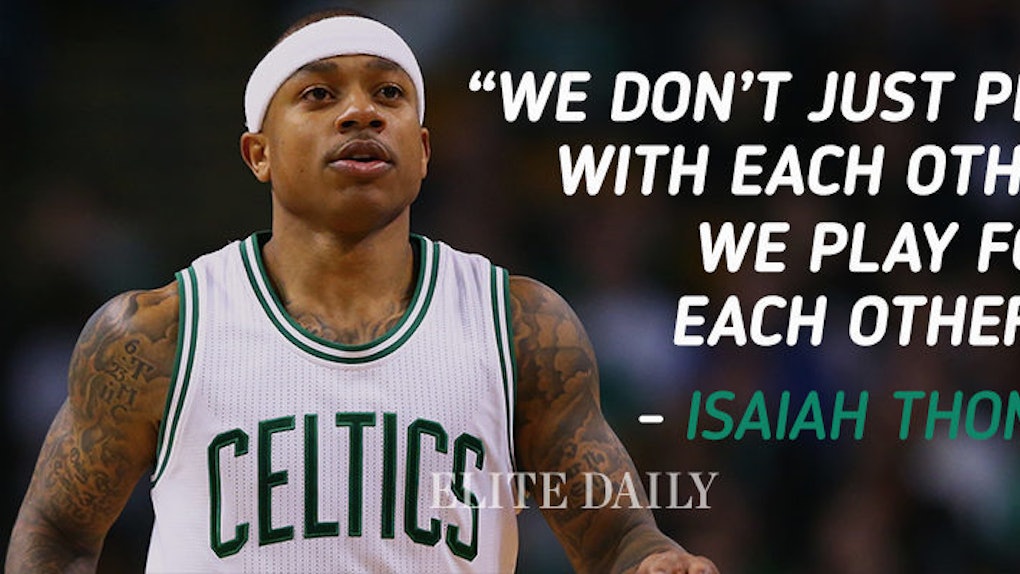 If You've Ever Felt Underrated, The Boston Celtics Are The Team For You

Like some of our favorite athletes, "regular" people can also be underrated.

Brian Acton and Jan Koum were both rejected by Facebook in 2009.

In 2014, Facebook ended up buying Whatsapp off their hands for $18 billion. Clearly, they were underrated.

Ron was a loser in "Sorcerer's Stone," then he ended up getting Hermione at the end of "Deathly Hallows." Clearly, underrated.

My salary has yet to hit the seven-figure mark. Underrated.

So, if you know what it's like to feel underrated, just know you're not alone. The Boston Celtics are here for you.

Just look at their starting five.

Speaking of seven-figure salaries, Crowder didn't even have one of his own when he was shipped from Dallas to Boston last year.

And with the career-threatening back issues Jared Sullinger had in college, it's amazing at 6-foot-9 he's starting as a center in this league.

If anything, though, their shared sense of being underrated has helped them.

We use that as motivation, that's why we play so hard and that's why. We don't just play with each other we play for each other.

Everything about the Celtics screams "underdog"... except their actual results.

Their current record is good for third in the league.

Their team defense is rated more highly than the Golden State Warriors.

Their coach, Brad Stevens, who is in his first job ever, is regarded as a savant and is now the Coach of the Month.

February was clearly a good month for Boston. Just about the only losses they take these days are in their battle against Chipotle addiction.

I have to admit, there are days I eat there twice. I just like Chipotle.

It's OK, Danny, this is a safe space.

But, for however weak the Celtics front office is in resisting bowls and burritos, they are just as strong in making genius moves to put together a team that can perform above expectations.

The 5-foot-9 guard is averaging over 21 points a game this year, which carried him to his first All-Star game.

People who watch him regularly know he makes eyes pop, especially when he does crazy stuff like this.

Still, despite the Vine highlights, the All-Star appearance and his team's great performances, Thomas still feels like he's -- you guessed it -- underrated.

I feel like people are starting to realize and I'm starting to gain some respect, but at the same time for my whole life, my whole career, I've never been in that position where people are showing the respect that I feel like I deserve. So I'm always in the back of my head gonna feel like there's still people saying 'well he can't do this, he can't do that,' and just use that as motivation to keep getting better.

You can't blame him either. Thomas has a lot of grudges to hold. During our interview last month at All-Star weekend, he said he was passed over by the Duke's and North Carolina's.

He remembers getting passed over by NBA teams during the draft while players he knew he was better than got selected.

There were a lot of players that [had me like] 'are you kidding me, I'm definitely better than this guy.'

He remembers getting traded, first from Sacramento to Phoenix, then from Phoenix to Boston.

Now, though, he's found a home with the underrated and undeterred Celtics.

I'm a firm believer in everything happens for a reason. And I'm glad it happened the way it did. Because if it didn't, I probably wouldn't be in the position I'm in right now.

That position is on a team that is going ridiculously far above beyond expectations and promises to only get better through the draft.

The Celtics are seriously next up in the NBA, but there are so many people who just don't realize how good they are.

Clearly, they're underrated. And if you know the feeling, they're just the team for you.