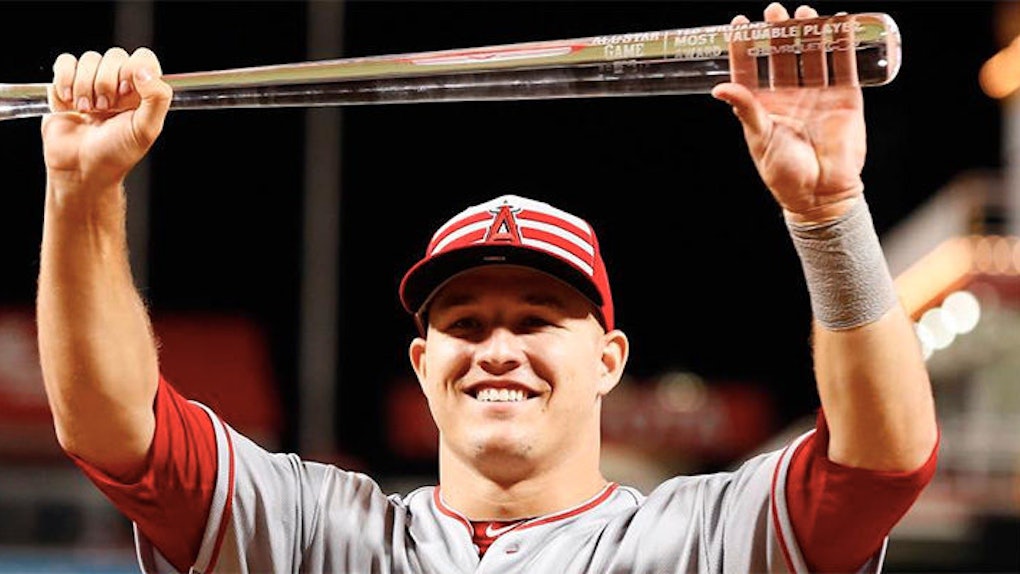 How The Angels Turned $4 Million Into Baseball's Most Valuable Player

Even UPS couldn't deliver this reliably.

After Mike Trout was crowned the 2014 All-Star Game MVP, the now-23-year-old gave an encore during last night's mid-summer classic, taking home another crystal bat in a way that proved he lives up to every expectation of the award's three letters.

Slapping a 94 mph Zack Greinke pitch on the edge of the plate showcased the power that's landed him a league-leading 26 home runs during the first half of he season.

Turning what should have been a routine double-play into a fielder's choice by reaching first base in 3.5 seconds brandished the speed that's helped him dash to nearly 50 stolen bases during his first complete major league season.

Winning the 2015 All-Star Game MVP award, most importantly, confirmed what most already knew: Mike Trout is currently the best player in baseball and, by extension, the best player of a new generation that has brought baseball its best young crop of talent maybe of all time.

If the fact that the Angels have Trout contractually committed to their team for the next five-and-a-half seasons is something for fans to savor, the story of how they got the player, then, is to die for.

Long before the idea of Mike Trout's baseball career was even conceived, the Angels began to journey along a path that would turn a nominal fee into an incredible return on investment.

It began in the summer of 2008, the season after the Angels had just missed out to the Atlanta Braves in attempting to land star first baseman Mark Teixeira from the Texas Rangers via trade.

This time around, the Angels got their man, bringing in Tex from Atlanta in exchange for Casey Kotchman and double-A pitcher Steve Marek.

Teixeira took off in Anaheim immediately, pairing his Gold Glove standard of defense with a .358 batting average.

He then brought that same devastating combo along with him in a losing effort during the 2008 ALDS against the Boston Red Sox.

Simply put, Tex quickly killed it for the Angels. Then he left just as fast.

Teixeira was lost in free agency following that playoff series, opting to sign with Yankees, who outmuscled their way to the player with a $180 million contract.

The move came back to bite the Angels in the halo almost immediately, with Tex helping the Yankees beat them in the 2009 ALCS, before going on to win the World Series.

This was a true body blow for the franchise.

In just over a year, the Angels had acquired a star they'd coveted for so long and saw him perform at his literal best for four months, only to have him stolen by the damn Yankees, who stiff-armed their rival Angels en route to a championship.

Yet, the story of Mark Teixeira's relationship with LA's "second" team is still an unqualified success for the Angels.

Because they had lost such a great player in free agency, league rules mandated the Yankees provide the Angels with an A-level compensatory draft pick.

With that pick, the 25th overall of the 2009 MLB Draft, the Los Angeles Angels of Anaheim selected none other than Mike Trout out of Millville Senior High in New Jersey.

That Trout ended up in Anaheim under such circumstances is not only one of baseball's best despair-to-delight stories, it's also hugely ironic.

The Angeles had given up just so little for Mark Teixeira. The two players traded back in 2008 in exchange for the first baseman are both in the minor leagues today.

Meanwhile, the deal only added $4 million dollars to the Angels' overall payroll that season, according to the LA Times.

Under any other circumstance, those $4 million would be insignificant, but the investment turned into a once-in-a-generation talent, the type that could land four All-Star appearances and a league MVP award all before turning 24.

If the Angels ended up resigning Teixeira back in '08, they'd have a player who today is batting .240.

The Angels lost, but in exchange they found Mike Trout, the best player in baseball and the most impressive ROI in sports.