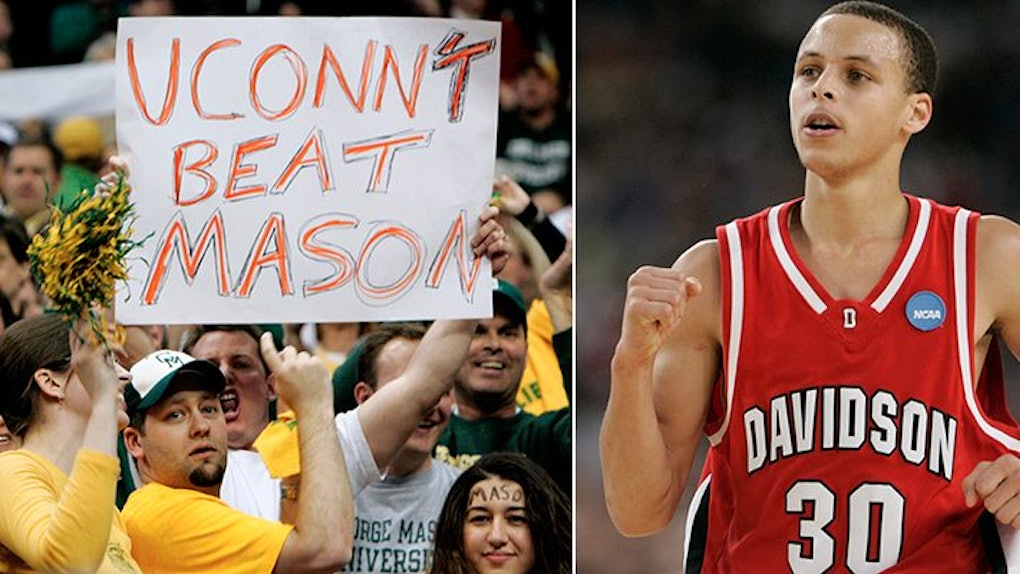 The official purpose of the NCAA Basketball tournament is to determine a national champion, sure, but we all know what fans love most about March Madness: upsets.

Nothing is more endearing in sports than the Cinderella story, and no competition delivers these underdogs like the men's basketball tourney.

So while we've had some really impressive winners over the years (Who could forget last year's buzzer-beating champions?), the David v. Goliath moments are what really stick out as memorable.

Here are 10 of those moments:

Villanova may have shocked everyone last year with their last-second, winning three-pointer last year, but even that wasn't better than what North Carolina State did in 1983.

The Wolfpack went all the way to the final as a 6-seed, beating Houston's legendary "Phi Slama Jama" team of the early '80s, led by current NBA Hall of Famer, Hakeem Olajuwon.

The final basket that won NC State the trophy is still probably the most memorable in tournament history. An air from the three-point line was caught by a teammate and dunked in before the buzzer sounded.

At first glance, you wouldn't think Yale's 2016 is anything to tell your grandchildren about, but give it some more thought and you'll realize their performance in last year's tournament is everything March Madness is about.

First, where else in life could a bunch of kids from Yale be considered lovable underdogs than at the tournament?

Second, after Yale pulled off a first round upset of Baylor, their second round matchup against Duke gave the internet its funniest pre-game roast session ever.

In other words, we all had fun making jokes about both of those schools. What can I say? It's the magic of the tournament.

A lot of people might not have known Steph Curry before became the NBA MVP with the super popular wife and even more popular daughter.

Still, he's probably the best thing that ever happened to the tournament.

In 2008, Curry led Davidson, a small-time school in North Carolina that you may very well have never heard of before this sentence, all the way to the fourth round of the NCAA tournament.

You knew he was going to be special when he had LeBron watching his games in awe.

Florida Gulf Coast's run to the third round of the tournament (aka the "Sweet 16") wasn't memorable just because the school won two games as a 15-seed.

I mean, that's impressive as hell, but what's even more impressive is the fact that they won two games as a 15-seed in the most disrespectful way possible: by repeatedly dunking on everybody.

By the second weekend of the tournament, everyone was calling the team dunk city, considering applying to their school (their campus is practically on a beach) and loving their locker room dances.

Georgia State's first round win over Baylor was a huge, 14-seed-vs-3-seed upset. But again, it's not the odds that made this memorable; it's the story behind it.

And that story can be explained with three facts.

Number three, Ron Hunter ended up falling out of his chair, injury and all.

Wichita State made its Cinderella run in the 2013 tournament, fueled by a few words that could be used as a motivating motto for any underdog in the world: play angry.

Wichita State played angry all the way to the Final Four, and beat the top two teams in their region to get their, all while sporting the best name any Cinderella could have: the Shockers.

The Texas Western University team that won the 1966 NCAA Tournament had a Hollywood story, literally.

The team's victory was immortalized in the movie "Glory Road," which depicted the team's run to the championship and the racism it faced along the way.

The reason for the racism is obvious.

The Miners were on their way to becoming the first team with an all-black starting lineup to win the tournament, and they sealed that accomplishment with an Cinderella win against the Kentucky Wildcats and legendary coach, Adolph Rupp.

Last year, Syracuse made it to the Final Four as a doubt-digit seed. But that was nothing compared to what George Mason did in 2006.

We know Syracuse and know about their fancy history. No one knew anything about George Mason in 2006, until they somehow found a way it to the Final Four by beating UConn in a game that came to the last second, twice.

George Mason's chances of winning the tournament were so slim that finding a person who actually bet on them instantly became national news. Clearly, they weren't supposed to be there, but that's the type of thing that happens during March Madness.