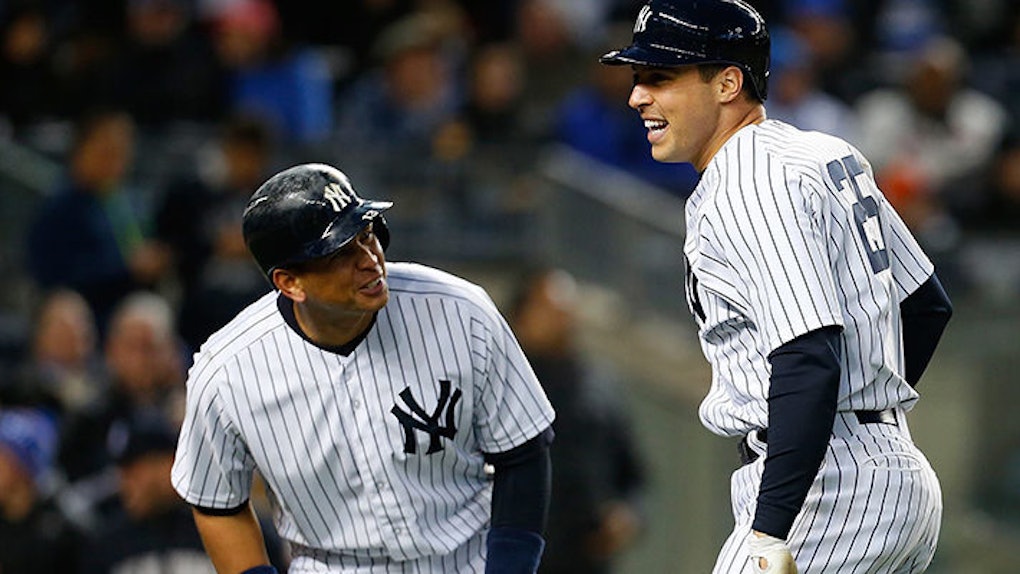 It seems like every year, the New York Yankees are predicted to be a middle-of-the-pack team that will fade into obscurity by the season's end.

Surprisingly, each season (in recent memory) has concluded with a strong finish no one saw coming.

Take last year, for example: They had a dominant ace in Masahiro Tanaka, who was cruising through a sure-fire Rookie of the Year campaign (and maybe Cy Young), until he went down with injury.

The rest of their rotation was a mixed bag between a (still) struggling CC Sabathia and a few nice surprises, like Brandon McCarthy, to hold down the fort.

This was by no means a great team. With that said, they still won 84 games. With a myriad of injuries from a slightly older team, it was quite the accomplishment.

Fast forward to this year: The pre-season narrative was the same. The Yankees found themselves in the unenviable position of a team that was practically unidentifiable.

Their superstar, Tanaka, was banged up in what seems to be a dubious rehab decision.

Their core was "too old."

Once again, all of the major outlets scoffed at the notion of a good Yankees season.

Grantland wrote the Yankees would finish dead last in the division. The team, predictably, started the season 3-7.

It looked as if the pundits were right that Father Time would finally catch up to New York.

Then, a funny thing happened: The Yanks have rattled off 18 wins in their last 23 games.

That's good for first place in the AL Eastern Division, and it's the best record in the American League. Let's look at some reasons for this turnaround:

Say what you want about his tactics, but this guy can coach. In his first year with the Florida Marlins, he won Manager of the Year.

Once he came over to the Yankees, the stakes were raised and expectations were through the roof.

In 2009, Girardi delivered that elusive 27th title for NYY, and all seemed right with the Evil Empire. However, since then, things have been a bit rocky.

The Yanks have lost out on countless marquee free agents, and the last several seasons have been slightly above average, at best.

They suffered through the embarrassment of missing the playoffs in Derek Jeter's farewell season.

With that said, though, the last two seasons have been impressive considering their age, limitations and insane amount of injuries.

The past two seasons, the Yanks have won 85 and 84 games. For anyone else, these would be considered good seasons. For the Yankees, they were just ho-hum, non-playoff years.

However, Girardi has had to deal injuries to key players like Michael Pineda, Mark Teixiera, Alex Rodriguez and Ivan Nova.

The Yankees have stayed relevant because of Girardi's ability to mix and match players; he has kept the team respectable.

It's the little things he's done. Carlos Beltran was struggling early in the season, so Girardi plugged in Chris Young, who has produced very well off the bench.

Now that New York is relatively healthy, Girardi is, again, showing he is the leader the Yankees need to return to prominence.

In January of 2012, General Manager Brian Cashman made a controversial and eye-opening trade with the Seattle Mariners.

Montero had a hopeful rookie campaign for the Yanks, and it looked like he was going to be the next great power bat in pinstripes. However, Cashman saw an opportunity.

It is very hard to find young stud pitchers, and at 22, Pineda was coming off an All-Star season and was primed to be a great starter for years to come. The years to follow were not too kind, though.

Pineda struggled through two injury-plagued seasons and an embarrassing pine-tar incident that made everyone question his motives and dedication.

However, things were even more comically terrible for Montero. He suffered through a season-ending injury, but he also had a ridiculous run-in at the minor league level that ended with a fan throwing an ice cream sandwich at him, mocking him for being overweight.

Mariners' General Manager Jack Zduriencik even said he had "zero expectations at this point" for Montero.

Pineda has been nothing short of lights out this season. He is 5-0 with a 2.72 ERA. He leads the American League in strikeouts and is second in wins.

His last start was the stuff of a legend. He had 16 strikeouts in seven innings with zero walks.

It was the first time since 1965 the Baltimore Orioles had been struck out 16 times.

To put that in perspective, it was the most strikeouts with no walks in Yankees history. The Yankees have been playing for over 100 years.

At only 26 years old, Pineda is now undeniably the ace of the Yankees staff. If he can keep this up, that trade will look more and more lopsided by the day.

There wasn't a single person on earth who wanted to see Alex Rodriguez succeed this season. Even Yankees fans did not want A-Rod's face to show up in pinstripes. Why would they?

Pushing 40 years old, Alex was the symbol for everything people hate about the Evil Empire: cocky, entitled and, worse, a cheater.

Rodriguez missed the entire 2014 year with a performance-enhancing drugs suspension.

Nothing he could say or do would dissuade fans from booing him incessantly.

So, A-Rod did the only thing he could do: embrace the hate, keep quiet and do his job. In less than 35 games into the 2015 campaign, Alex has silenced all critics.

Back in the middle of the lineup, A-Rod has eight home runs and is hitting moonshots again. He is catching up to fastballs, to everyone's surprise.

More than his game returning, his mental focus seems to be sharp. For years, his ego has gotten in the way.

Now, he has kept his mouth shut and kept it about baseball, the team and winning.

He has proved an old adage to be true: If you work hard, the results will do the talking for you.

The once-hated villain of New York is even getting curtain calls again. The fans have re-embraced Alex because he is producing.

For now, all is good with the polarizing A-Rod. If he can keep hitting, the cheers will keep on coming.

At first glance, this seems silly and trivial. After all, it's just a little upper lip hair. Who cares?

Well, the New York Yankees have a standard they have always gone by: If you're wearing pinstripes, you are to be clean-shaven in the face. The one loophole, however, has always been the mustache.

From Goose Gossage to Ron Guidry, to the legendary Thurman Munson, these Hall-of-Famers all rocked the look proudly.

This trend seemed to die in the 80s, though, and it was never to be seen again, aside from First Base Coach Tony Pena.

In spring training, Brett Gardner decided he would try and resurrect the look.

Greeted with comical indifference, it just seemed like a fad that would not catch on.

Then, a funny thing happened: Everyone got into it. From Brian McCann to Chase Headley to Jacoby Ellsbury, nearly half the team now rocks the mustache proudly.

This great article gives you the rundown of all the mustachioed greats in 2015. Gardner said it was simply a fun thing he wanted to try that ended up catching on.

It has turned into a bonding experience, and it shows everyone is locked in and dedicated.

While it might be an eye-sore, it appears the 2015 Yankees are, for once, having fun. Gone are the stuffy Yanks who are too rigid to enjoy anything.

They aren't taking themselves too seriously, and the results have been outstanding so far.

Can it be sustained? Check back in September for the results.