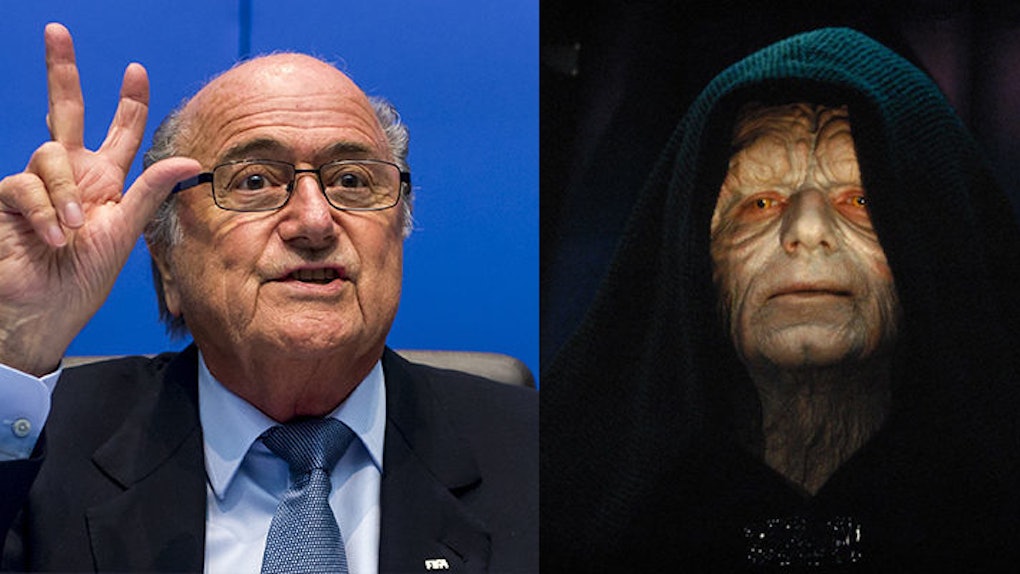 And, while all of those characters have shown to be bad to the bone both on and off the field of play, they've also been covered in the media ad nauseam.

We know Luis Suarez has bitten multiple people, but he scores fire goals for Barcelona, so no one cares at the moment.

But, what about the lesser publicized scoundrels of sports?

I'm talking about the owners, coaches, commissioners and media personalities who have done and continue to do some pretty shitty things, inside the workplace and out.

These are the 15 biggest behind-the-scenes villains in sports.

From his days as provost and vice president at Montana State in the early 90s to his current role as the all-powerful president of the NCAA, Mark Emmert has been one of the worst hypocrites in sports.

Not only did he engage in and try and cover up various violations at every academic institution where he was employed, but Emmert also passed off blame to anyone and everyone around him.

In his current role as NCAA head honcho, Emmert gets involved in cases when he feels like it, takes the high ground when it suits him and still can't fathom why a free education isn't enough for “student-athletes.”

Stephen A. Smith, Inside Reporter

In addition to the revolting comments he made regarding domestic violence last July, Stephen A. Smith recently pissed off anyone with a conscious by doing an in-depth interview with Floyd Mayweather, Jr. right before the “Fight of the Century.”

You know, because of Mayweather's repeated denial of a long and storied history of domestic violence.

And, domestic abuse aside, no journalist can be taken seriously after appearing on camera with an interviewee one minute, and then posing for a friendly photo with them the next.

A total authoritarian who has botched everything from the Ray Rice fiasco to Deflategate, Roger Goodell feels answerable to no one. And that's the biggest problem.

This man has far more power than any individual should, and he doesn't give a damn what you think. An NFL team in London? Sure, why not; all Rog sees are dollar signs, baby. Travel woes be damned, there's money to be made here, people.

And, until you and I stop tuning in on Sunday, there's no reason for him to think and act otherwise.

Don Berlusconi is the current owner of soccer giants AC Milan, former Prime Minister of Italy and a media tycoon.

This dude doesn't just hold max sway in Italy, he's one of the most powerful men in Europe. And, from alleged links to the mafia to accusations of corruption, he's also one of the most ratchet.

Not to mention the “bunga bunga” parties -- crazy, sex-fueled ragers that involve a ton of alcohol, high-powered friends of Berlusconi and an underage girl or two.

In addition to owning one of the most unsuccessful franchises of the last 50 years, Haslam also owns Pilot Flying J, the nation's largest diesel retailer.

Last year, Haslam was ordered to pay just shy of $100 million after taking responsibility for the criminal actions of his employees.

Basically, though Haslam claims he has no direct knowledge of any wrongdoing, many of his employees knowingly looked to cheat customers out of rebates they were due.

Specifically, they went after the customers who weren't intellectually sound enough to notice.

"Greed is good" applies to few like it does the owner of the Miami Marlins, Jeffrey Loria.

Loria duped the city of Miami into paying $500 million for a ballpark they didn't need, hired a manager who made controversial comments about Fidel Castro -- knowing a large population of Miami residents are from Cuba -- and then sold half of the Marlins roster to save his own skin.

The president of FIFA is about as close to pure evil as you can get.

In power since 1998, Blatter oversaw the awarding of the 2018 and 2022 World Cups to Russia and Qatar, respectively.

Not only have there been numerous allegations of corruption leveled against Blatter and FIFA regarding the selection process, but old Sepp refuses to acknowledge the human atrocities that are currently occurring as Qatar build for the 2022 event.

According to reports, more than 4,000 workers will die by the time the 2022 World Cup rolls around, with deaths occurring as a result of poor working conditions and extreme heat.

The Qatari government denies even a single worker has died.

Blatter says the only reason giving the World Cup to Qatar was a mistake, is because it will be too hot for the athletes to compete in 2022.

Blatter also won't come to the United States because he fears FBI questioning over the corruption charges.

Despite the fact that a jury found Isiah Thomas sexually harassed a New York Knicks executive, and that Thomas also failed miserably as head coach and President of Basketball Operations of the Knicks, MSG owner James Dolan still saw nothing wrong with appointing Thomas the newest president of the New York Liberty.

Because, why wouldn't it be a good idea to make a known sexual harasser the head of a women's basketball team?

Isiah just keeps that smug grin on through it all.

Before he crashed a motorcycle while joyriding with his mistress, the current Louisville head coach used to coach in the NFL.

You can be forgiven if you don't remember, Petrino only led the Atlanta Falcons for 13 games before running to Arkansas with his tail between his legs.

So, there was Bobby coaching at Arkansas, hiring an underqualified woman to join his staff just so he could have sex with her.

Did I mention that Petrino left Louisville to follow his NFL dreams in the first place?

Not sure who should be more ashamed, Petrino or Louisville.

You may remember Jay Mariotti from his time with the Chicago Sun-Times and ESPN.

And, it was while he was featured by The Worldwide Leader in Sports that the bombastic, combative sports personality was arrested on suspicion of domestic violence.

Mariotti plead no contest to the charges, but was dismissed from ESPN following the incident.

Recently, Mariotti was hired as the sports director of the San Francisco Examiner.

In a recent interview, he outlined his plan for the future of the paper and attempted to explain away those domestic violence issues.

A lockout of a professional league is a black eye on all of sports. So, it's almost beyond comprehension how a dude who's responsible for three lockouts in 20 years could still hold the same post.

And, not only is Bettman despised by players and fans alike for the lockouts, he's hated because he appears to genuinely be holding back the sport of hockey in America.

You think Goodell is bad? At least we never missed an entire NFL season. I shudder at the thought.

Sure, John Calipari has won at most places he's coached, but at what cost?

While with UMASS, Calipari brought the Minutemen basketball program to the national stage.

However, years after he left the program, the NCAA found violations that forced the school to vacate postseason wins and a Final Four appearance.

Similar events occurred during Calipari's tenure at Memphis, where a season's worth of wins were taken away from the Tigers because it turned out star player Derrick Rose didn't actually take his SATs.

In both cases, Calipari was found to have committed no wrongdoings whatsoever. He currently coaches at the University of Kentucky, a school considered a national basketball powerhouse.

Despite the fact he's only 40, Lane Kiffin has perfected the art of jumping from team to team, leaving a trail of destruction in his wake.

In just seven years, Kiffin managed to go from the youngest head coach in modern NFL history to a laughing stock at the University of Southern California.

Things started off okay for Lane in Southern California, but it ended with him firing much of his coaching staff, including his own father.

Kiffin is currently the offensive coordinator at the University of Alabama.

Not only is Dan Snyder a terrible NFL owner, he's a terrible human being.

Snyder's company, Snyder Communications, was fined $3.1 million for phone slamming -- the illegal act of switching a customer's telephone service without authorization -- in 2001.

Snyder Communications was also fined $2.5 million on a separate occasion, after the company was found guilty of forging customer signatures to switch long-distance providers.

After he took over the Redskins in 1999, Snyder immediately continued his greedy ways by charging admission to training camp workouts.

After the 9/11 attacks, he implemented a $4 “security charge” on top of regular ticket prices.

In 2006, Snyder had his FedEx field vendors sell peanuts that were initially intended to be used for an airline that had been non-existent for over a year.

Is this guy for real?

Let's not even get into the naming issues of the actual team.

Despite the fact that Skip Bayless makes a living as a sports journalist, he has an incredible history of being wrong.

In addition to his comments on John Wall, he's criticized LeBron throughout his career, even when LBJ hits game winners:

That buzzer-beater didn't make up for the dozens he has missed in his career, but it sure helped. — Skip Bayless (@RealSkipBayless) May 10, 2015

LeBron finally does the right thing on late shot! TAKES IT TO THE BASKET vs. bad team w/ half its guys fouled out. Laid it in lefty for win. — Skip Bayless (@RealSkipBayless) March 7, 2013

That was EASY. Especially without Hibbert. Beat the heck out of LeBron clanking another walk-off jumper. Way to go, MVP. — Skip Bayless (@RealSkipBayless) May 23, 2013

And, let's not forget that he picked the Redskins to win the NFC East last year:

The Redskins will win the NFC East and RG3 will return to being the division's best QB. — Skip Bayless (@RealSkipBayless) July 24, 2014