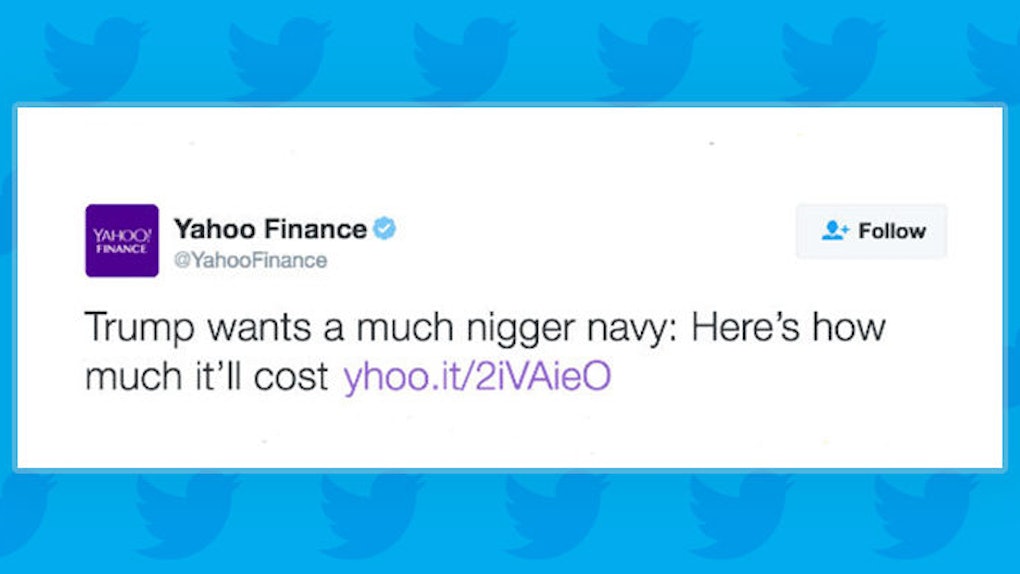 Yahoo Tweets Out N-Word Typo And Twitter Shows No Mercy

I work for you fine people of the internet so I totally understand how any mistake I may make can, and usually is, blown up in the comment section.

You'll pinpoint how stupid and under qualified I am for my job, and I love it.

Your angry emails are my life blood. Those comments in which you use my full name? Ugh, they make my family proud. And when you take the time to find my Twitter to shoot me a message, featuring very graphic images you may include, it is not taken for granted!

That said, I think we can all agree this is just a terrible, terrible typo...

Obviously, whoever runs the Twitter account for Yahoo Finance didn't mean this. The "B" and the "N" are right next to each other on the keyboard. LOOK FOR YOURSELF.

President-elect Trump wants a much bigger Navy. (If you're interested, it's 60 percent higher than the historical average, but I know you're here for the typo, so let's move on.)

The tweet was only up for a few minutes, but the damage was done. Twitter users went in on it.

Hopefully, no one is getting fired over THE WORST TYPO OF 2017 (so far).

Ironically, this comes shortly after Yahoo! wrote about Washington Post Magazine's cover -- which featured a male symbol for their Women's March cover story.

To their credit, the Express staff quickly acknowledged the mix-up, tweeting, 'We made a mistake on our cover this morning and we're very embarrassed. We erroneously used a male symbol instead of a female symbol.'