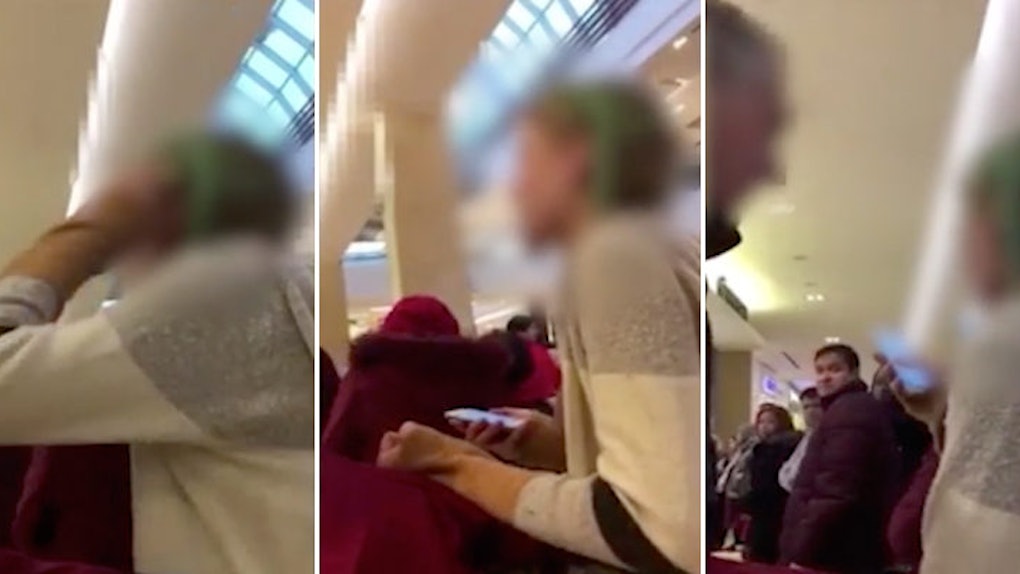 Teen Curses At Grandpa In Crowded Mall In Infuriating Video

Cursing in front of my grandparents is a big no-no in my family.

In fact, when I'm in the same room as my grandma and grandpa, saying things like "dammit" or "that sucks" are frowned upon. It's how it's always been, and it's how it'll aways be.

Believe me, it's not like they can't handle the curse words — it's just that they expect to be respected, and rightfully so.

An anonymous girl who was taped screaming at her poor grandfather in a crowded mall obviously missed the memo that you should treat your elders with love.

She was filmed by a bystander screaming "f*ck" multiple times at her grandpa, who stood helplessly next to her in a crowded mall while enduring the verbal abuse.

Apparently, the young girl, whose green hair is tightly French braided to her head, is upset that her and her grandpa are missing her cell phone appointment.

After her calm, cool and collected grandfather tries to reason with the angry teen, she lashes back at him multiple times in a fit of rage in the public area.

Upon her mid-mall freakout, the spoiled teenager makes a suggestion toward her grandpa that made my heart drop.

Can you please just go up there and talk to them for me? And, like, leave me with money or something?

Alright, girl. It's time to quit yelling, calm the hell down and give your poor grandfather a break. You're embarrassing me, and I'm not even at the mall.

Seconds later, her grandfather shamefully digs through his wallet and gives her a credit card in exchange for her cell phone.

Side note: I don't blame him for wanting to push her away. At that point, I would've left and waited for the whiney brat in the car.

But, apparently, he isn't moving fast enough for his selfish granddaughter, and is bickered to "go" faster, until he disappears from the shot.

OK, first of all, who the heck gave this chick a lesson in manners? I wouldn't act like this in front of my worst enemy, let alone my grandfather.

I hope she apologized to him afterward and realized how terribly she acted.

Then again, something tells me that she doesn't give a sh*t.