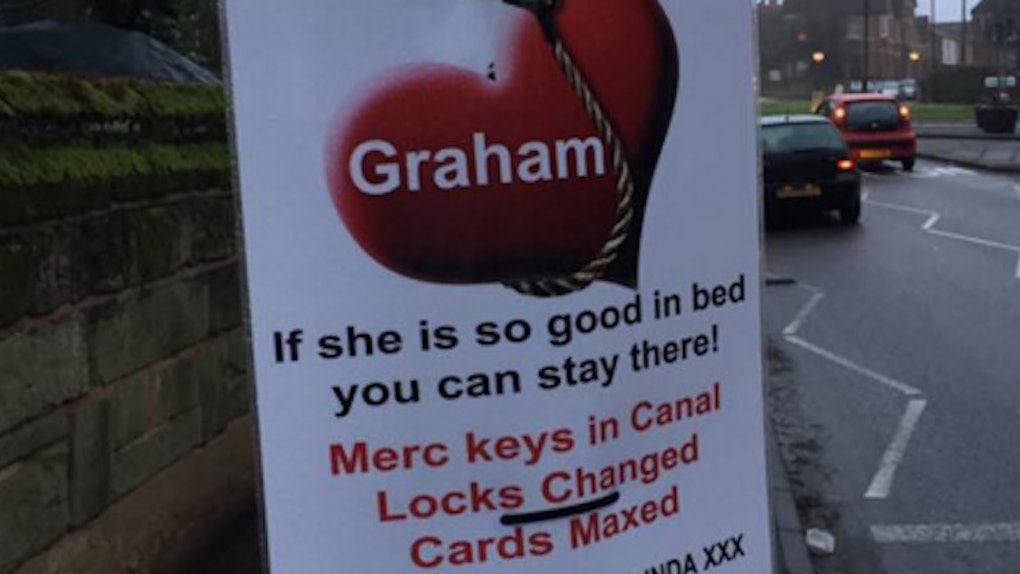 Savagery has found a new level and her name is Linda.

She printed out brutal posters outing her partner as a massive cheater and pinned them to poles around their town.

It was meant for their neighbors and close friends in Warwick, England, but now the whole world knows of Graham's scandalous ways.

Graham If she is so good in bed you can stay there!

There's a powerful image of a heart in a noose. Damn. Underneath her note, she lists what she's done to him in her anger.

In red ink, she explains,

Graham's been the talk of the town ever since. It's left people wondering what he did to put himself in that position. Let's not rule out the possibility Linda is actually a troubled lady.

People want to hear his side of the story. Joan Cummins tweeted a photo of the poster and asked

Dear Linda of Warwick, not sure if you're real but this has made me smile. Graham, if you're out there what's your version?

I kinda think something as good as this needs to be left a mystery — it makes it sexier.

Now's a good moment to revisit the husband who caught her wife cheating with a drone because the future is now.

The guy had suspicions his wife hadn't been faithful for a while. She claimed she was having to go into work early for meetings, but was actually getting up to no good.

One morning, he launched the camera and followed her. Turns out, she'd been going to a nearby CVS parking lot and meeting up with her piece of man meat. For shame.