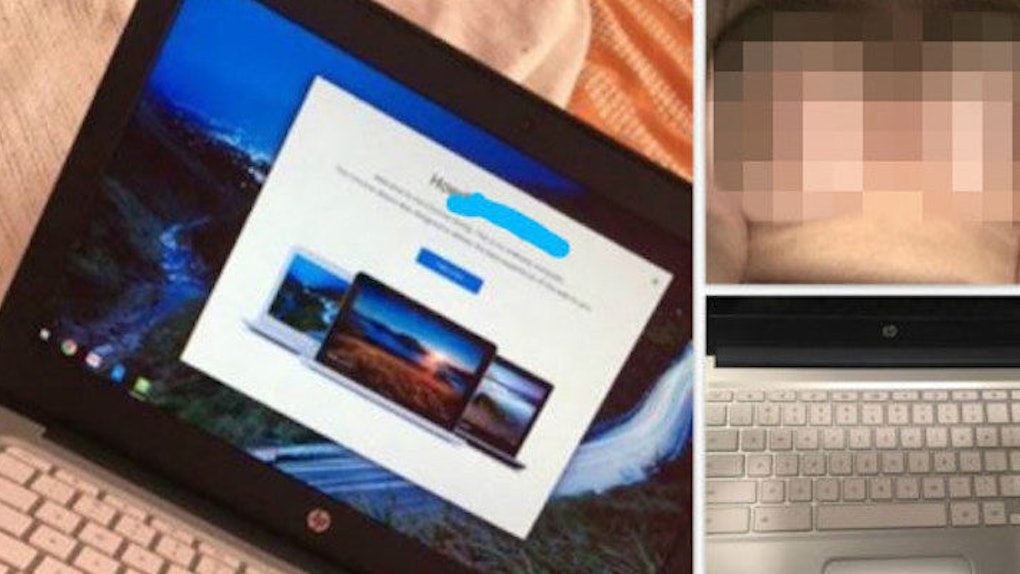 You know how it goes: One minute you're trying to sell your personal belongings, the next minute photos of your private parts are all over the internet.

Well, that's how it happened for this girl, at least. She wanted to get rid of her laptop, so she posted an advertisement on Facebook complete with photos.

Here's its exterior, its keypad AND OH, BOOBIES PUSHED TOGETHER WITH BOTH ARMS.

Why? I can only speculate. But she was definitely taking photos for the sexting archive. We've all been there, it's OK.

If your attention wasn't already grabbed by her hooters, $175 really isn't a bad price at all for a laptop. A bargain, actually.

This advertisement reminds us a lot of a review a woman posted once.

Louise from Stevenage in the UK wrote a few innocent words about her awesome washing machine (who has time to write a washing machine review?) when she accidentally uploaded this photo:

Yep, that's all of her in the reflection.

Love my new machine. It's nice and has quite a big door and plays a nice tune when it's finished washing -- love it.

Maybe she was actually talking about her body and it's really a hidden message to empower women everywhere to embrace their bodies.

Or maybe all of her clothes were in the wash at the time the picture was taken and she literally had no idea her boobs were now on the web for the world to see.

While we're at it, let's laugh at another reflective faux pas. This one's weird.

Think that businessman on the subway is checking his emails?

Look at that face of concentration. No shame. Zero chill.