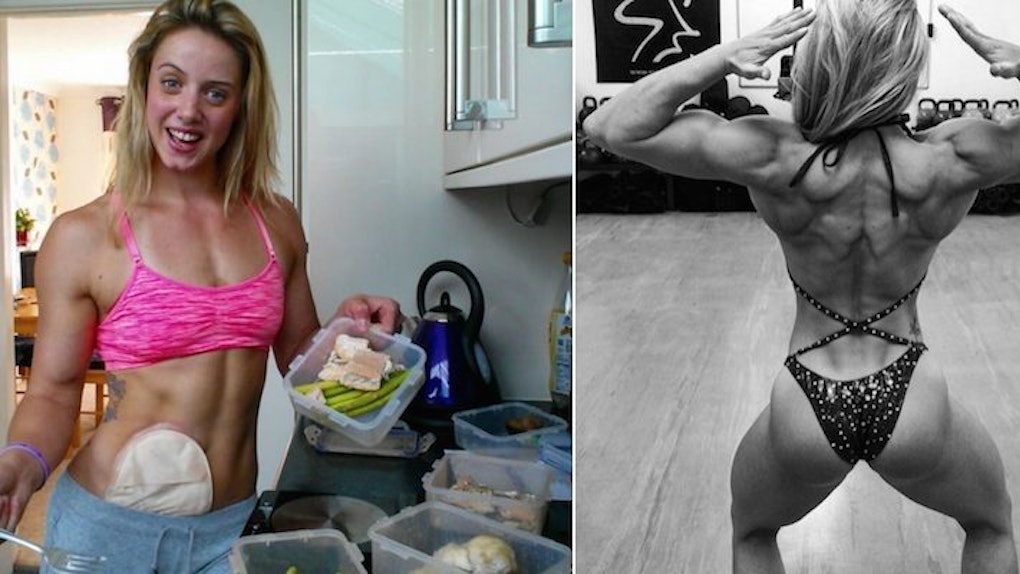 Woman Becomes Bodybuilder Despite Struggling With A Difficult Disease

Zoey Wright has lived with symptoms of IBD since 2012, when she rapidly lost nearly 30 pounds and her white blood cells began attacking the lining of her bowel wall.

In an interview with Metro, she recalled,

I remember stepping on the scales and seeing the numbers and I couldn't believe it. I went from being a healthy 140lb to an unhealthy 112lb in less than four weeks. I just cried… I cried a lot. I could barely walk and sometimes I couldn't even leave my bed to even wash myself because I was so weak.

Wright's doctor recommended ileostomy surgery, which entails removing all or the majority of the large bowel and pulling the small bowel outside of the abdomen to form a stoma.

When Wright's health improved to the point of avoiding the drastic surgery, she used the threat of the procedure as an incentive to gain weight in a safe, healthy way through bodybuilding.

IBD or, more specifically in Wright's case, Ulcerative Colitis fought the new bodybuilder every step of the way, making it difficult for her to train along with her partner Conor.

Every time I was getting stronger… my UC would remind me it was there, tearing away my insides, causing me chronic pain and leading to countless hospital admissions, countless drugs, treatments. It was mentally and physically pulling me down.

Two years after her symptoms began, Wright agreed to ileostomy surgery in 2014.

Ten months passed since the procedure, and Wright is on track for her very first show as a bodybuilder.

The pain persists occasionally, but Wright vowed to power through and see her goals achieved. She said,

Whenever I felt down, I found myself turning it into motivation... When you have passion and drive for something you enjoy nothing will stop you. Bodybuilding has always been my coping mechanism and it continues to be that every single day. I'm in control and I'm going to kill it.

Citations: Meet the girl who became a bodybuilder after life-changing surgery for ulcerative colitis (Metro)