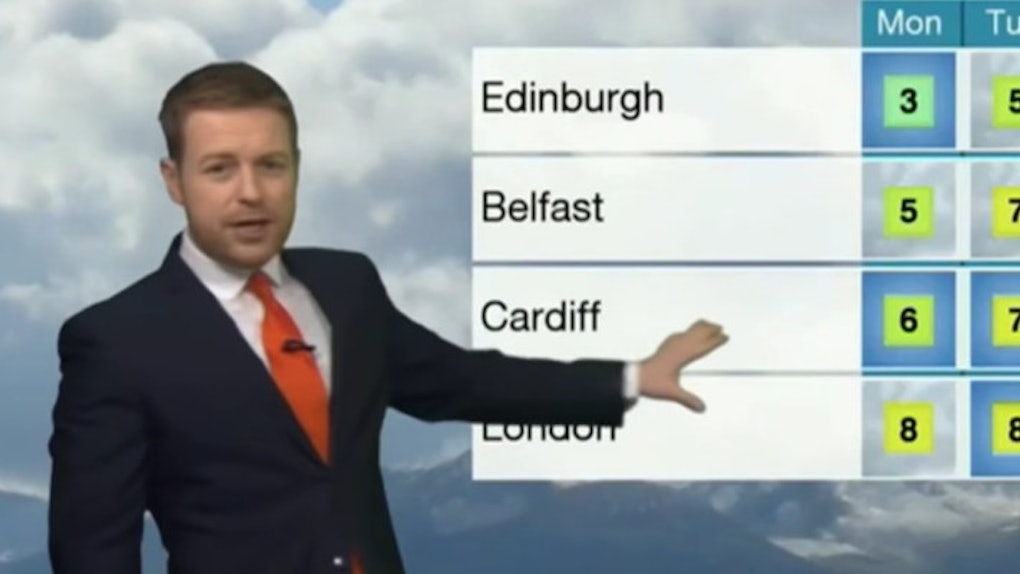 "Go hard or go home" is a saying that only applies to the gnarliest of weathermen.

Listeners tuned in to BBC Radio 4 (the most proper and gentlemanly of England's radio stations) to hear what they thought would be an accurate and softly-spoken forecast.

BUT THEY WERE WRONG.

Tomasz Schafernaker was reading the forecast just before 5:30 am a couple of weeks ago when his voice became wavy and it sounded like he was going to breakdown and cry.

He was actually trying to hold down vomit and ended up yakking while live on air.

In a short audio clip, the weatherman is heard saying,

He bolts from the mic and it sounds like he crashes into something on his way into the studio.

There's a pause before the presenter comes back on and says,

Do apologize. That was Tomasz Schafernaker, and we'll just complete the in-shore waters forecast.

It's been speculated the weatherman was recovering from an intense night at the office Christmas party, which had allegedly taken place the night before.

If this is true, we applaud Tomasz for making it into work.

Tomasz was taken ill during an early-morning shipping forecast following a long and demanding night shift on December 4. Fortunately, he handled the situation professionally and made a full recovery.

It's not the first time he's made the headlines. Sorry for bringing this up again, Tomasz, but even you have to admit it's too funny to ignore.

A while back, he was taking about the forecast for Glastonbury Festival (it's like England's Woodstock), when he he made this gaff,

Now this evening and tonight, we start to see the thundery weather coming in, in the early hours of the morning in Glastonbury — some pretty steamy showers on the way — which will give way to quite a muddy shite. SORRY, excuse me — muddy site.