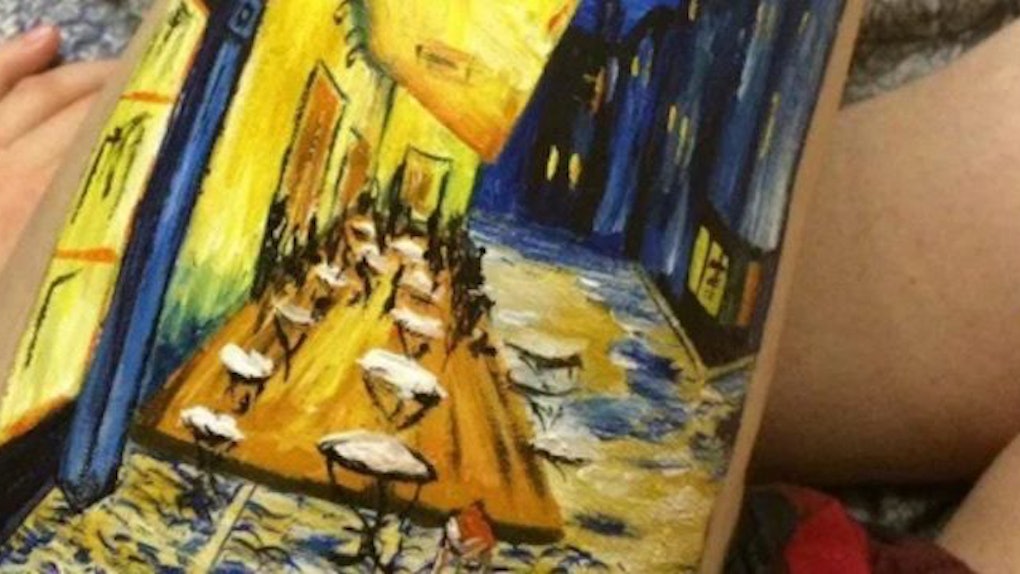 If you've ever suffered from depression or anxiety, you're well aware day-to-day life isn't exactly a walk in the park.

Quite often, people who battle the draining feelings associated with these mental health illnesses fall victim to self-harm.

However, a teenager named Amelia Hall is exploring a new way to deal with her depression and anxiety, one that isn't detrimental to her well-being.

Instead of harming her own body, Hall has resorted to painting -- but she's using her leg as a canvas.

Needless to say, this chick has a lot to be proud of.

According to Metro, the talented teenager decided to paint a picture of Van Gogh's "Cafe Terrace At Night" on her thigh instead of hurting herself.

Commenting on the painting, she said,

I decided to recreate Van Gogh's painting on my leg because painting is what has helped me realize that there are far less destructive methods of coping than self harm, and that nothing is worth hurting yourself over.

Apparently, she had been self-harming for years. Thankfully, a paint brush was her saving grace.

The caption acknowledges her tendency to self-harm, and says,

Today has been the worst day in a long time, but I recreated a beautiful painting on my skin instead of self harming.

So far, the inspirational tweet has already accumulated 3,000 likes.

Hall spoke with Metro about the support she's been receiving from people online who have seen the Van Gogh recreation on her leg.

Everyone is being so supportive and I've had many messages from people telling me what I've done is inspiring, which is wonderful because by posting it I wanted to try and help reduce the stigma surrounding mental health.

In my opinion, Amelia Hall is a brave artist whose talent can encourage others to deal with distress in a healthy, creative way.

Citations: Teen recreates amazing Van Gogh painting on her leg to stop herself from self-harming (Metro)