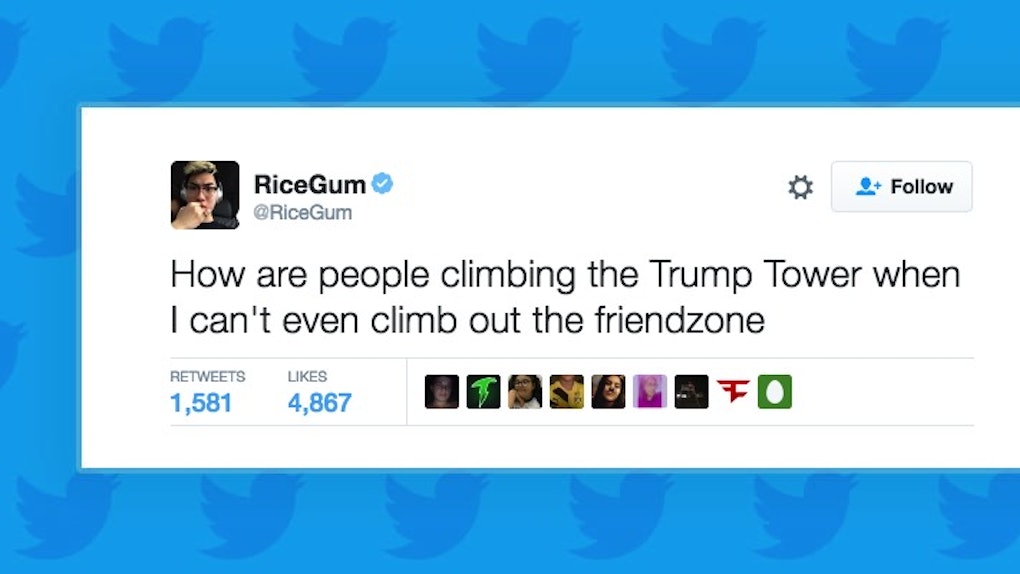 The Best Twitter Reactions To The Trump Tower Climber

In under an hour after positioning himself to scale the 664-foot-tall building, live-streams of the bizarre stunt took over Twitter.

As a result, people began anxiously watching this guy scale the side of the structure using nothing but a couple of harnesses and suction cup pads.

So far, the Trump Tower climber has only been able to make it up a few stories high before law enforcement officers and rescue workers began closing in on him by gaining access through nearby windows.

This wild stunt made for some pretty priceless Twitter reactions from people watching the live streams made available by several news outlets.

When this brave soul decided to scale the side of Trump Tower in the center of Manhattan, Twitter went nuts.

Hey, it's not every day that someone builds up enough courage to actually pull a stunt like this.

This is truly a nail-biting spectacle if I've ever seen one.

The stunt even birthed a new, trusty pickup line.

People even suspected that Donald Trump paid this guy off for publicity purposes (as if he needs any more).

This Trump Tower guy seems like a publicity stunt to distract people from what Trump said yesterday about sending 2A people after Hillary — Griffin (@oopsgriffin) August 10, 2016

Others figured he was looking for a rare Pokémon while playing Pokémon Go.

Some believe this bizarre stunt could have something to do with Frank Ocean's highly anticipated album release.

This guy suspects the Trump Tower climber actually meant to be in Rio at the Olympics.

Screw Spider-Man. This stunt HAS to be about Harambe.