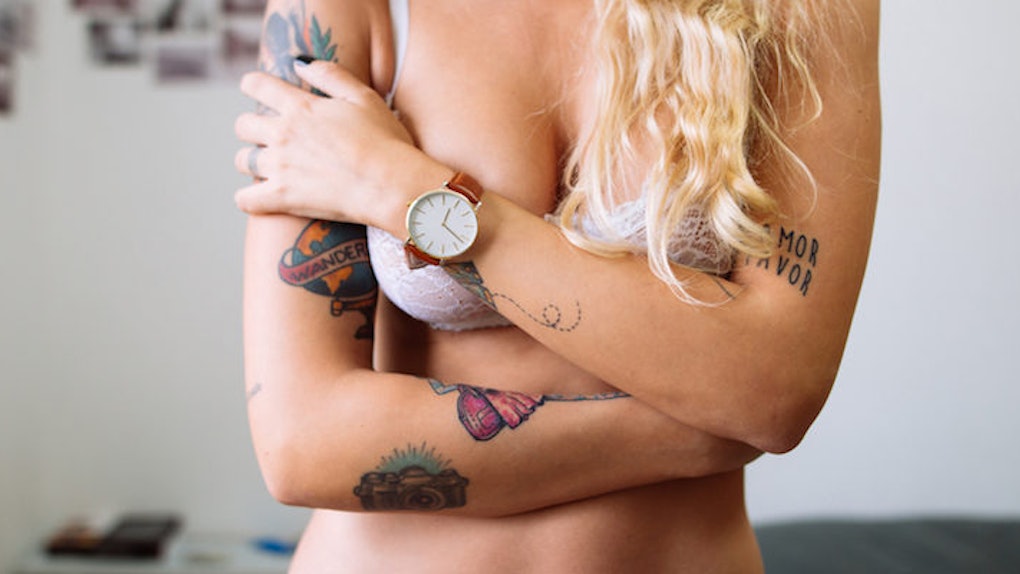 The 18-year-old student at Clatsop Community College in Oregon decided it was time to take action and turned to photography to express her fears about Trump's unexpected win.

Watson created the powerful photo series below (warning: some of the pictures may be NSFW), titled #SignedByTrump, which showcases different women's bodies and Trump's sexist comments written on their bare flesh.

“As a feminist, when I saw that Donald Trump actually won, my heart shattered,” Watson told the Huffington Post.

The photographs were originally shared on Facebook and Instagram, but the social sites took them down. So, Watson decided to share them on Tumblr, where currently have over 113,000 notes and have gained a ton of major coverage.

As a feminist, when I saw that Donald Trump actually won, my heart shattered.”

"I'm scared that the way he speaks about women — this sexism and misogyny — will end up becoming a social norm," Watson said.

Despite her innovative idea, Watson admitted that it was challenging to find models for her #SignedByTrump photo series. She ended up finding only five women, her close friends, to participate in the photo series, herself included.

Watson's greatest hope is to inspire young women to own the power of their voices. She told Teen Vogue,

Don't let anyone silence you. Don't be afraid to speak up about what you are passionate about. I don't know why Donald Trump is in office, or how this even happened, but he is. What we need now more than ever is to come together. We are stronger together.

Watson added that her only regret with the series is that she would've liked the women to have been more diverse (one is Latina and the other 4 are white) to more accurately represent all of the groups Trump has offended, alienated and marginalized with his words.

Unfortunately, Watson said she lives in small town and attends a predominately white school that has little diversity.

I've gotten tons of messages and comments asking me where all the women of color are... I understand where those people were coming from. Don't get me wrong I would have LOVED to have some more women of color, but I live in such a small town and attend such a small college where the majority of people are white.

She told Buzzfeed that she originally made the series for her introductory photography class.

"All I wanted from these photos was to help people realize who Donald Trump really is, and I just want to feel heard," Watson said.

All I wanted from these photos was to help people realize who Donald Trump really is.

Watson has most definitely had her work seen and heard, and we're all inspired by the way she has used her creativity to make a powerful impact on our society. You can follow more of her work on her YouTube channel.