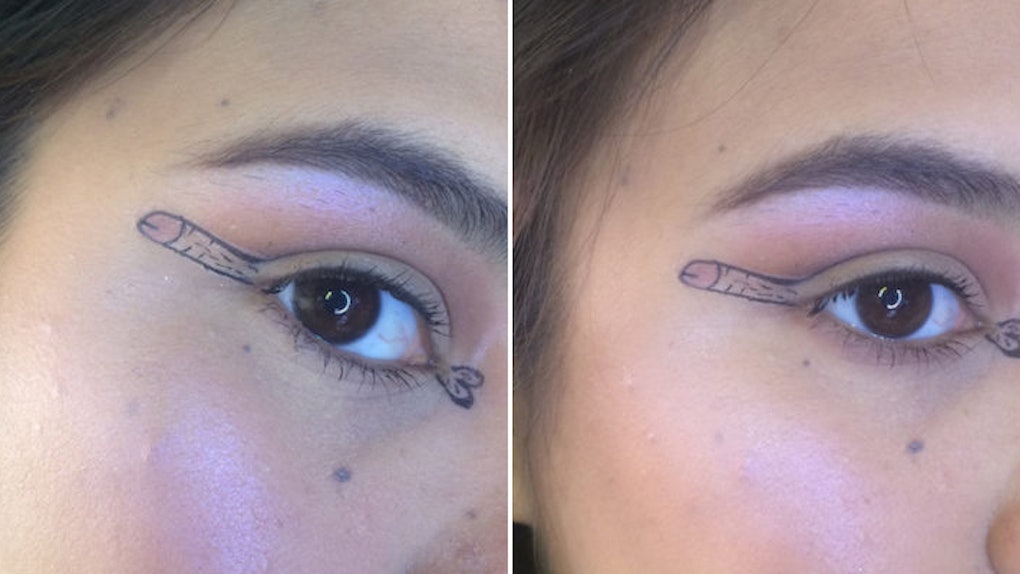 Teen Drew 'Dick-Liner' On Her Eyes To Diss Makeup Trends

EVERYONE GO PUT LIL' PENISES NEXT TO THEIR EYEBALLS RIGHT NOW.

The makeup artist social media community is insane. It's full of people just shoving makeup, glitter and just straight-up large shiny stones onto specific parts of their body in the hopes of looking less like a person and more like a Lisa Frank-sponsored fever dream.

For instance, look at this crap.

Thankfully, someone has started to call the MUA community out (not to be confused with the PUA community. *bows* Thank you. This joke is for literally six people. I hope one of them is reading this).

Meet Twitter user Asialbx, the sort of anti-Christ of the makeup artist community.

Honestly, why bother with all that gold flake crap when you can just draw tiny dicks next to your eyeballs?

Wow MUA Twitter has been so creative with their eye looks, thought I'd have my take pic.twitter.com/Nsfm460HVV — asia (@asialbx) November 18, 2016

Asia told BuzzFeed that "[she] wanted to joke around about the creative and artistic eyeshadow looks."

The internet jumped on this trend, and the tweet has since become super viral -- probably because it's the first time the MUA community has really been called out in a context like this.

Also, it's probably because drawing a dick next to your eyes is effing hilarious.

Asia's followers have been overwhelmingly supportive of the act of dick-lining your eyeball sockets. (Is it clear I know almost nothing about makeup yet?)

Some have even decided to dick-line their own face.

Asia has no ill will against the MUA community. She clarified,

I think they're all creative and amazingly talented! My dick-liner will never compare!

Is 2017 the year dick-liner becomes a thing?