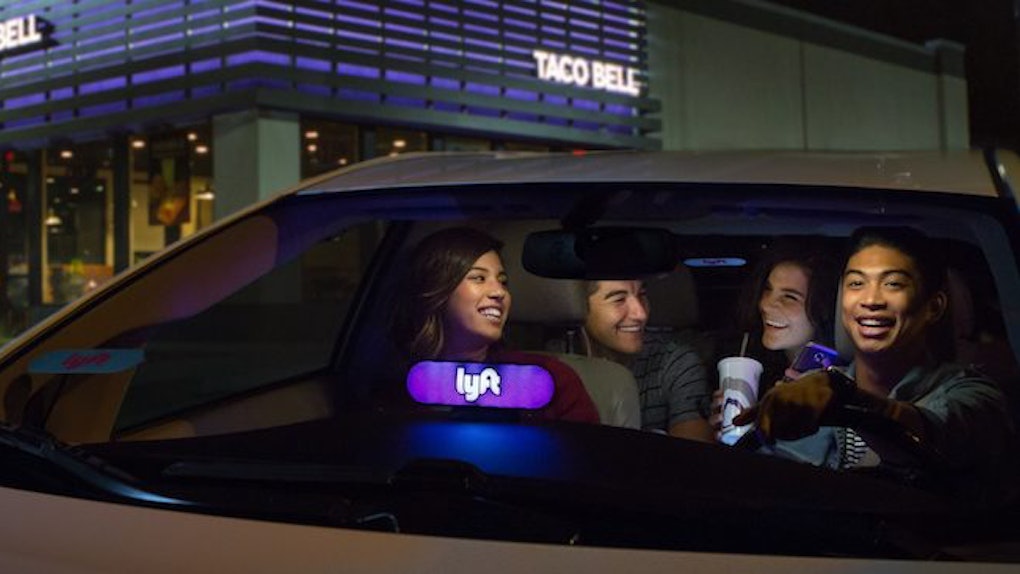 If you've ever wanted to ask your Lyft driver to make a Taco Bell stop on your way home after a long night out (but have been too shy to actually ask), I've got some good news for you. Taco Bell has teamed up with Lyft to offer riders late-night Taco Bell stops with "Taco Mode." This is a total game changer, guys.

"Taco Mode" is the hot new feature and it'll be available for Lyft riders — in a beta form — starting Tuesday, July 25. The downside is that Taco Mode is only being tested for two weeks around the Newport Beach area in California. The New York Times reports if this new feature is successful, we may be seeing it nationwide as soon as next year.

To use Taco Mode, all you have to do is tap Taco Mode in the Lyft app and make sure you're between the hours of 9 p.m. and 2 a.m. (which is the only time frame the new feature will be available for now), and that's it! You're on your way to Taco Bell heaven.

According to The New York Times, Taco Bell isn't paying Lyft -- or vice versa -- for this new partnership. They are, however, looking to create a cool experience for riders together.

It was about time Taco Bell partnered with Lyft because riders were already asking their drivers to make TB pit stops, Tech Crunch reports.

Is it just me, or does it seem like Taco Mode is Lyft's answer to UberEats? Except Lyft might want to be careful, because mixing partygoers in the back of a car with messy tacos might be a recipe for disaster.

Let's hope this Taco Mode test in California proves to be a successful one, because I would really enjoy using Taco Mode sooner rather than later. I'm also curious to see what feature Uber is going to roll out next.