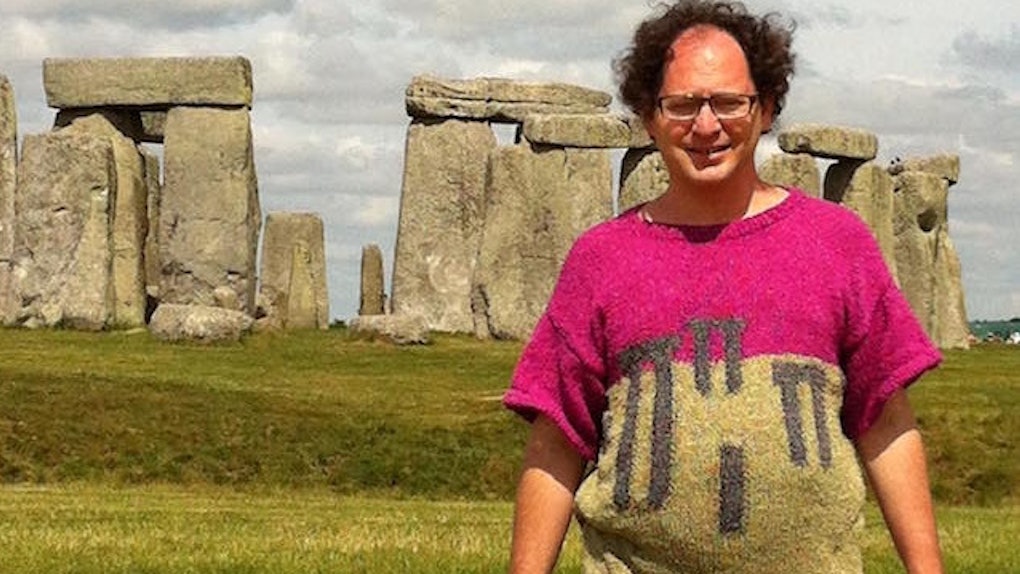 Guy Makes Glorious Sweaters For Each Place He Visits

Traveling the world and knitting all day are two things most people make time for at one point during their lives.

The knitting part typically comes after the traveling part... you know, like way down the line when you're 80 years old and the only thing you want to do is knit and watch daytime television!

We'll all get there someday, unfortunately.

One guy, however, has been both knitting and traveling at the same damn time. Let's just say he has the wardrobe to show for it -- no postcards needed.

Recently, epic photos of a man who makes glorious sweaters for each of the places he visits hit the internet, and people can't get enough.

Can you blame them? These sweaters are MASTERPIECES.

Even Meryl Streep will agree that this is an art form!

In a recent post published to Imgur titled, "This guy makes sweaters of places and then takes pictures of himself wearing the sweaters at those places," we're introduced to Sam Barsky, a globetrotter with a knack for knitting.

Instead of collecting a bunch of postcards people are just going to throw out later, this dude creates sweaters of the places he's visited just before snapping a priceless photo at each destination.

Perhaps the most awesome part about these sweaters is the fact some of them are random AF.

One Imgur user hilariously pointed out,

I love how it's not even all famous places. It's random shit like pylons, a road, a dog in a garden...

Meet Sam Barsky, the man who makes sweaters for all of the places he visits. He's a freakin' genius (and master sweater-maker)!

You might recognize some of these places. Here's Times Square.

However, quite a few of Sam's creations are random AF.

But ALL of them are awesome.

Kiss your annoying Snapchat stories goodbye, people. It's all about sweater stories in 2017!

So far, the photos have racked up over 1 million views on Imgur. The internet digs the sweater stuff!

You know, this might mean we all need to do more when it comes to cherishing our special travel moments.

All we do now is snap a couple of Instagram photos, wait for the likes to roll in and forget within a few days we even traveled.

Nope, no more of that. Get on this guy's level if you want your memories to live.

If we all just knit sweaters after we're done visiting Rome, Santorini and the deli down the street from your house, we'll be better off.

Also, is it just me or does this guy give off serious Ken Bone vibes?!!

Citations: This guy makes sweaters of places and then takes pictures of himself wearing the sweaters at those places. (Imgur)