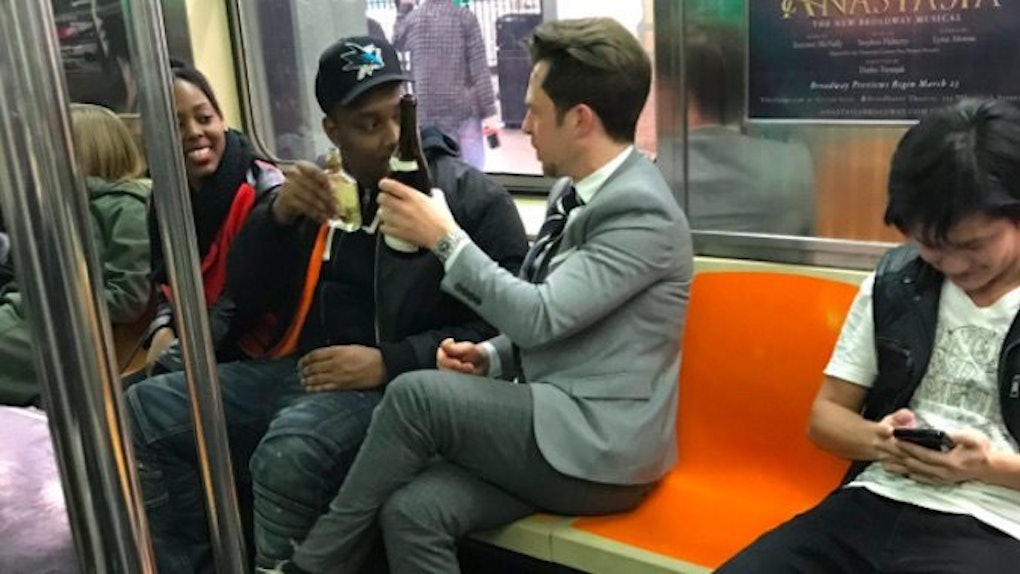 Traveling on the New York City subway is rarely an enjoyable experience.

Sure, New York is arguably the greatest city in the world. But if you live here, you know just how unpleasant public transportation can be.

Between the unidentifiable smells, the crowds and the people who insist on listening to their music without headphones, a ride on the subway can be the absolute worst.

But for these two men who found a bottle of wine under their seats, riding the subway was possibly the best thing to happen to both of them all day.

Colleen Hagerty, a journalist for NowThis, snapped this epic shot of two strangers after they came upon an unopened bottle of wine underneath their seats on the 6 train. She accurately referred to the moment as "peak NYC."

Aww, just look at those two!

Look at that body language! The man on the right is actually crossing his legs toward his new friend as they toast to their awesome discovery.

Hagerty tweeted out the picture, which has already received over 50,000 retweets and about 174,000 likes, and people can't get enough of it.

Couldn't have said it better myself.

Like, how did they open the bottle? Did someone use that weird shoe trick that's never actually worked for anyone? Are these guys still friends now? Why do I only ever find gum and used Band Aids under my seat?!

See, this girl knows what's up.

Um, hold up a minute, though. Apparently one of the guys who found the bottle of wine already had some booze with him??

This is a totally valid question.

Whatever the case may be, this just goes to show, even in a world as divided as this one is right now, complete and total strangers are still capable of sharing some pretty amazing moments together.

Citations: Two strangers toasting a bottle of wine they found under their seat on the subway is too pure (Yahoo News)