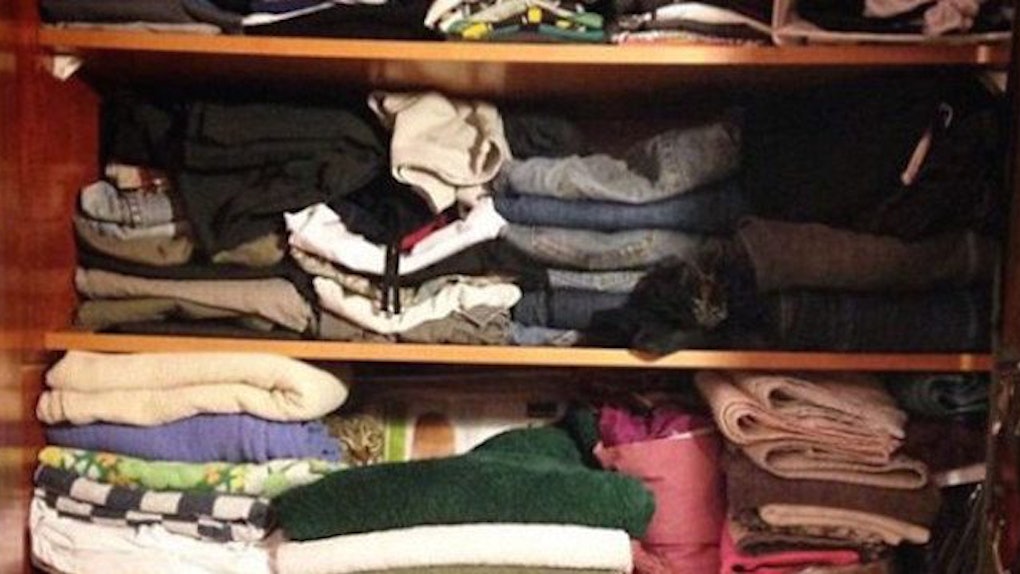 Not too long ago, the internet lost its mind over a puzzle that asked you to find a panda hidden amid a sea of snowmen.

If locating that darn panda pushed your brain to the brink of exhaustion, you might want to brace yourself.

It turns out pandas aren't the only stealthy species in the animal kingdom.

Apparently, cats are also pretty skilled when it comes to mastering the art of camouflage.

In fact, some felines are so good at blending in with their surroundings, you may not even notice them hiding right under your nose.

Recently, Playbuzz user SJoel shared a picture of an expertly concealed kitty and now we're all trying to spot the cat in this linen closet.

No, really, if you thought it was pretty hard figuring out where the hell "Waldo" was located in a crowded scene, you've clearly never tried to track down a cat in a pile of laundry.

But that's not all. It turns out SJoel had a whole collection of photos that contain sneaky cats lurking in various scenes that are just as hard to find.

... along with a dumpster diving feline.

A photo of the ground...

... and a hard-to-spot tabby that looks uncannily similar to a pile of dirt.

A snapshot of a seemingly empty garden...

A picture of someone's lawn...

... and an inconspicuous cat sitting right in the middle of the scene.

Plus, a photo of a strange wooden structure....

Seriously, these creatures blend in so well with their backgrounds, who knows how many cats could be hiding among us at this very moment?

Citations: Can YOU find the cat? Every one of these images features a sneakily hidden feline (Daily Mail)