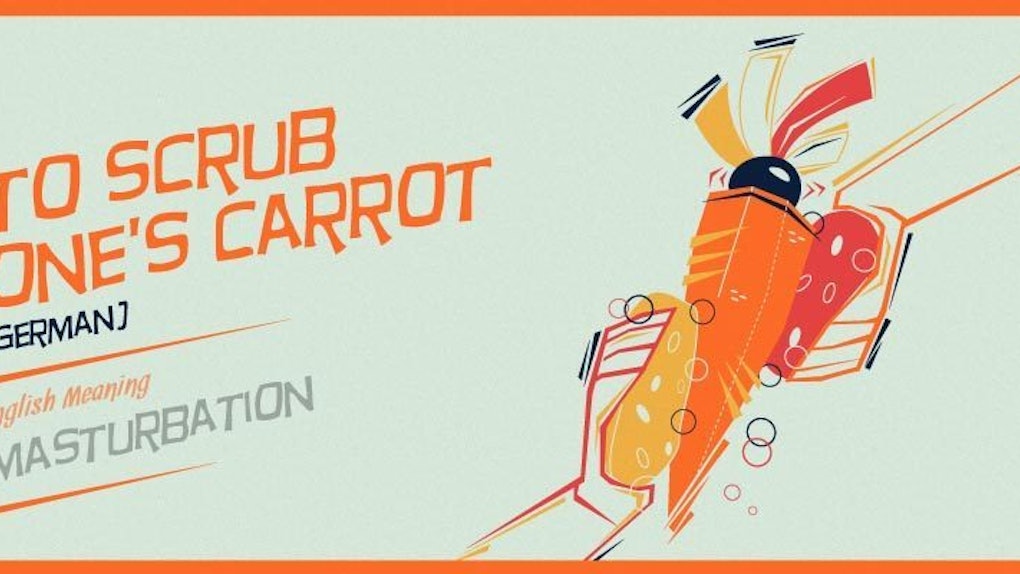 How to Say 'Netflix And Chill' In 9 Different Countries

With Valentine's Day right around the corner, romance — and by association, sex — is forefront in everyone's mind. For those without significant others, it's not so much sex on the brain, but the depressing lack thereof.

Either way, much of your thoughts over the next few weeks are likely to be dominated by the subject.

Check out the graphics below to see the different idioms different countries use when talking about sex, and find more at Superdrug Online Doctor.

Spanish: “To put the cake in the oven”

It's kind of like having a “bun in the oven,” but before the bun is cooked, you have to put something else in the oven. Get it? (The oven is a metaphor for a womb, obviously).

English (US): “Netflix and chill”

Leave it to the Germans to get literal with their sexual innuendos. Sure, there isn't really any scrubbing involved (hopefully), and OK, it's not a carrot — but the visual is pretty spot-on.

Pretty straight forward. Dicks are ugly. Vaginas are ugly. They're both ugly when you bump 'em together. Bumping uglies.

Apparently, this is a really vulgar way of talking about sex. Scopare, in Italian, comes from the noun scopa, which means “broom.” Why this is a metaphor for sex is kind of unclear, unless it's the phallic shape of the broom being referenced, in which case, there are plenty of other objects better-equipped to stand in for “broom.” Moral of this story: Don't say this in public, because people will think you're horrible.

Remember that scene in “Mean Girls” where the guy is like, “is your muffin buttered?” That's what this reminds me of. If someone in Russia asks you to pet their monkey, they're probably not talking about a monkey. Run fast. Or don't…whatever.

Playing with balls in your pocket = playing pocket pool. Guys, don't do this. It's not cute.

Albanian: “To plow the land”

I'm not sure why, but “plow” makes me think of sex no matter the connotation. That said, this idiom likely references the metaphorical “seed” that is (sometimes, if you forget to use a condom) planted during sex. Remember, kids: Always use birth control.