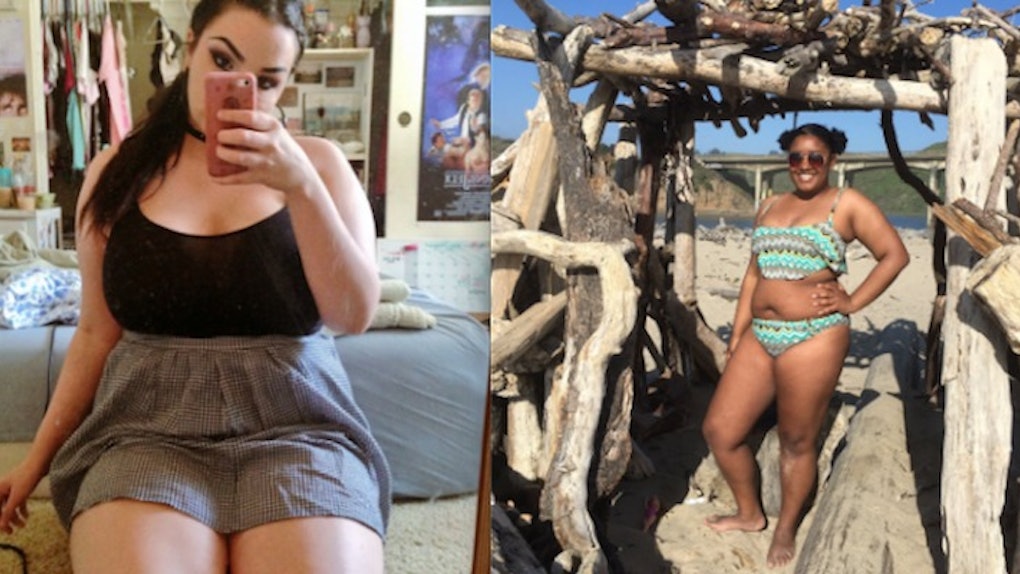 I can finally say I've found my favorite hashtag on Twitter.

This week, ladies of all sizes used the hashtag #WeWearWhatWeWant to show off their amazing outfits and looks, despite what "society" might tell them they can or can't wear.

Seriously, this is a great reminder we need to throw the goddamn fashion rules out the window. Rules are made to be broken, right?

Well, these ladies don't give AF anymore. They will wear what they want, and they won't be stopped. This type of movement should be more than a trend. It should be the new rule.

Wear what you want, and forget the old rules.

The trend was started by Simone Mariposa, a 23-year-old blogger from LA. She started tweeting about how she was done listening to other people who said what she should or shouldn't wear.

She, along with many other women, are done having their images defined by other people.

SHOW YOUR ARMS SHOW YOUR BELLY SHOW YOUR LEGS ITS HOT OUTSIDE #WeWearWhatWeWant — ❥danielle (@_deemania) July 23, 2016

We can totally get on board with this.

YOU DO WHAT YOU WANT WHEN YOU POPPIN #WeWearWhatWeWant pic.twitter.com/KGQ2PJ8EPQ — bad gal teetee ariel (@kiddotrue) July 24, 2016

#WeWearWhatWeWant bc I'm tired of always wearing hoodies and baggy clothes in the summer to try and hide my rolls pic.twitter.com/cHjNC1OYUF — ㅤ (@tandresus) July 24, 2016

I'm fat and super cute and nothing is ever going to stop me from wearing whatever the heck I want! #wewearwhatwewant pic.twitter.com/Db4c0g5EzX — elena (@fluoxeteen) July 24, 2016

I've been cyberbullied for my extra love handles. Deleted these pics because of that, but no more! #WeWearWhatWeWant pic.twitter.com/9okWaXRsVO — Birthday Gal. (@ashleytearra) July 24, 2016

Listen to the ladies of Twitter. Wear what you want, and don't listen to anyone who tells you otherwise.

Citations: Ellen Scott for Metro.co.ukTuesday 26 Jul 2016 3:10 pm The #WeWearWhatWeWant trend will inspire you to forget dumb style 'rules' We wear what we want. (Picture: Twitter/GraceFVictory) When you're a woman, you get bombarded with a lot of 'rules' about what you should and shouldn't wear. Don't wear short shorts if you don't have a thigh gap. Don't wear prints if you're curvy. If you're over 30, give up the mini skirts. All of those rules are total bullsh*t. And we're tired of it. So we welcome the #WeWearWhatWeWant trend with arms open and wardrobes ready. The trend was started by Simone Mariposa, a 23-year-old plus-size blogger. She started to urge her followers to share selfies with the hashtag after seeing a story about a plus-size woman who'd been criticised for what she was wearing. Simone told Buzzfeed that she related to the woman's experience, and knew that other plus-size women would relate to it too. And so she started a hashtag, #WeWearWhatWeWant, and encouraged women to use it to share pictures of themselves wearing whatever the f*** they wanted – especially clothing they'd been told wasn't acceptable for them to wear. The response has been glorious. Loads of women have been sharing stunning photos of themselves looking and feeling incredible. And the hashtag has now become a lovely place on the internet, filled with body-positivity and acceptance. It's brilliant. More of this, please. F*** trying to make people feel bad about what they're wearing. We wear what we want. MORE: This body positive lingerie line will make you want to walk around in your underwear MORE: Boohoo and ASOS are charging more for a plus-size dress and women are p*ssed MORE: Frostine the plus-size ballerina will inspire you to love your body THE FIX The daily lifestyle email from Metro.co.uk. Enter your email Sign upFind out more MOREBody imageFashion Mermaid crowns are the new flower crowns and soon everyone's going to be wearing them SPONSORED 12 'clean' dinners you will actually want to eat Starbucks baristas have finally succeeded in their fight to wear fedoras Woman with vitiligo challenges beauty standards with beautiful Instagram post Subway turns down teenage job applicant 'because of her tattoos' A guy cosplayed as a real life Lego figure and it was not awesome MORE: 22 reasons getting dressed in the summer is the absolute worstMORE: Women are wearing anti-engagement rings to celebrate self loveMORE: Zara has been accused of ripping off an independent artist's designs Comments by Taboola Sponsored Links FROM THE WEB Why So Many Guys Are Loving This Razor Harry's Chef Curated Recipes Based on Seasonal Farm Fresh Ingredients Delivered Every Week to Your Doorstep HelloFresh Thinking About Going Solar? Read This First Home Solar Quotes 27 Giant Mistakes You Never Noticed In Major Motion Pictures My Daily Viral Rescuers Thought It's A Dog, But It Isn't Mental Flare Old Photos That Will Take Your Breath Away Detonate MUST READ Mermaid crowns are the new flower crowns and soon everyone's going to be wearing them Shells > flowers. Starbucks baristas have finally succeeded in their fight to wear fedoras We have reached peak Starbucks. Winnie the Pooh cloud appears over children's charity event in Dorset Awwwh. Sega to release mini Mega Drive console and we can't cope The relaunch is to celebrate 25 years of a spiky blue hedgehog we all know and love. Airline passenger left with egg on his face following backfired complaint JP McNeiland appears to have bit off a little more than he could chew when he posted a picture of an air hostess online... Murdered priest forced to kneel as attackers 'performed sermon in Arabic' Isis has claimed responsibility for the attack. British Council worker described Prince George as a 'f**king d**khead' Angela Gibbins described him as 'royal, rich and advantaged'. Girl's awful 'professional' makeover from Urban Decay will make your face itch A look most certainly not fit for an #OnFleek Instagram hashtag. 'Phonebox baby' reunited with man who found her 22 years ago They were reunited after he read about her in Metro. Henrikh Mkhitaryan reveals Shinji Kagawa helped persuade him join Manchester United Yes Shinji! Chelsea replace Man United as most hated Premier League team Suspect Arsenal fans may have hijacked another poll... Zlatan Ibrahimovic can emulate Robin van Persie's success at Man United, says club legend Big talk. Revealed: Ibrahimovic discusses private transfer talks with 'good friend' David Beckham Love this. Knifeman 'who killed 19 at disability centre' identified as former employee He reportedly told police 'I want to get rid of the disabled from this world' Michelle Obama used her speech to absolutely bury Donald Trump - without even saying his name 'I wake up every morning in a house that was built by slaves...' EastEnders: Killer Claudette Hubbard seeks revenge on blackmailing Aunt Babe How far will she go? Man United fans convinced Paul Pogba is a done deal after Gonzalo Higuain joins Juventus The domino effect. Deal close: Manchester United set to seal £100m Paul Pogba deal within 48 hours Nearly there... Miracle after woman with chronic migranes cut out two ingredients from her diet She'd suffered for 20 years. Here's what Swedish dads make of getting 480 days paid paternity leave We want to move to Sweden. Fireman Sam in Islamophobia row after character 'stands on Koran' Controversy in Pontypandy. Did slaves really build the White House? Michelle Obama was accused of needing to check her facts WHAT'S TRENDING NOWMore trending stories » (Metro UK)