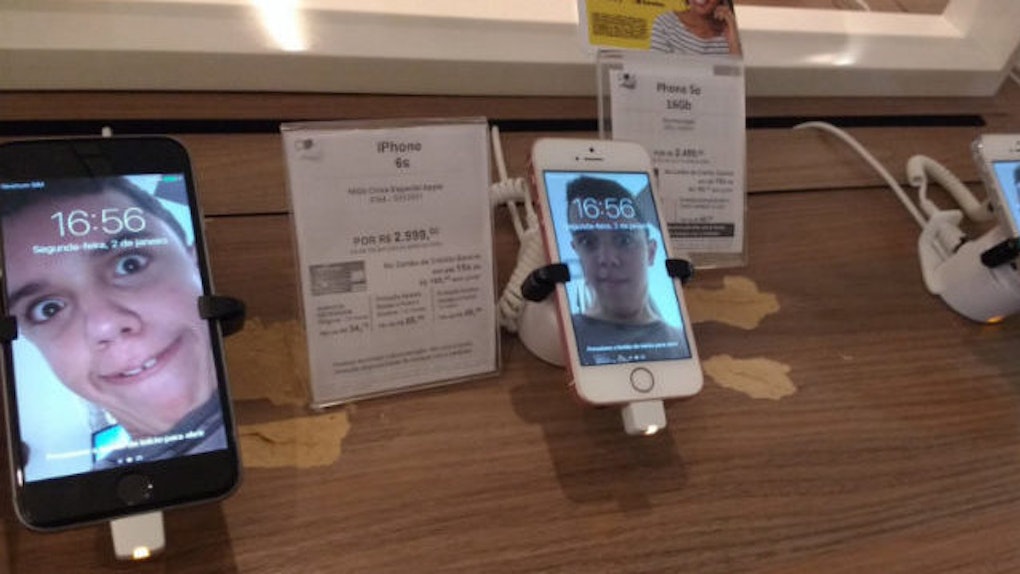 Kid Uploads Selfies As Wallpaper For Every Phone In Store

Whenever you buy a new phone, part of the fun comes from fiddling around with the newer models at your Verizon store or Apple Store or back alley where you purchase stolen phones for a huge discount.

Personally, I like writing, "I, an iPhone, have become self-aware. Buy me, and you'll be my servant for eternity," into the Notes app just to see if anyone will notice and freak out like the guy who believed his printer had become sentient.

Well, one kid from São Paulo, Brazil decided to go into a Saraiva store and go phone-by-phone changing all the backgrounds to epic selfies of himself.

Apparently, a Twitter user named Camilla saw the boy giggling to himself in the Center Norte shopping center store and had to investigate.

I saw him messing around and laughing, I hadn't seen him making faces.

Oh, this kid made enough expressive faces to call himself the next Andy Serkis. Just take a look at some more of his trolling.

When Camilla saw his handiwork all around the store, she laughed, went over and congratulated him on his "work."

Like any masterpiece artist receiving hard-earned praise, he giggled to himself and thanked her for her words. Guys, you're looking at the next Banksy.

Honestly, if I got any of these selfies as my go-to wallpaper, I wouldn't even change it. I probably wouldn't use the phone -- I'd just frame it and hang it up as art.

Honestly, this kid is the exact type of hero we need in 2017: bold, brave and a taker of great selfies.

Speaking of selfies, we reported earlier how one woman's selfie went viral (not for the reason why this kid's several selfies have garnered international attention).

Clearly, this selfie-taker needs to spend less time snapping and more time tidying up her room. It looks like a raging bull was let loose in there.

Citations: This Kid Replaced The Wallpaper On EVERY Cellphone In This Store With His Selfies (BuzzFeed)