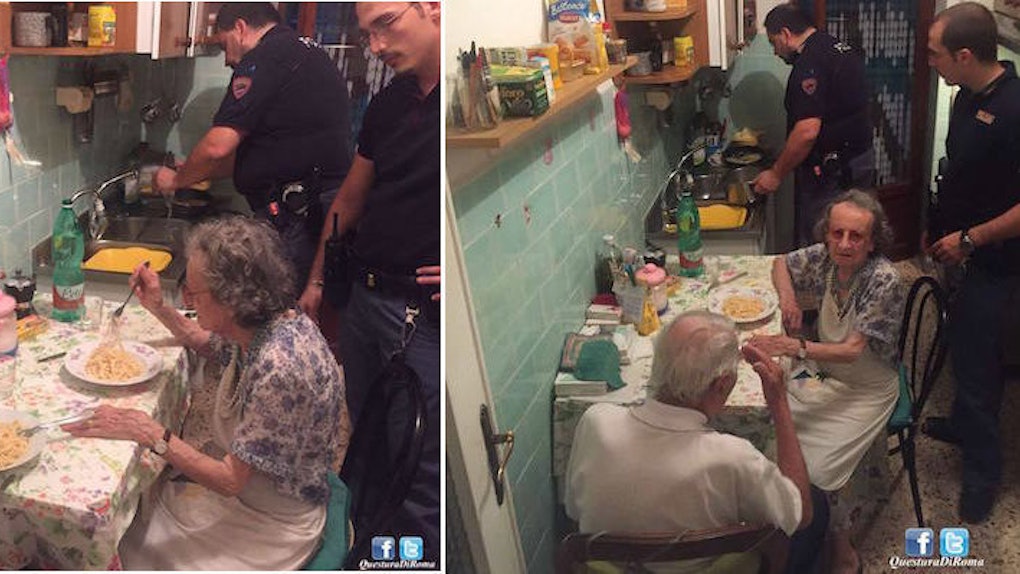 Crying Old Couple Gets Police Called On Them, Cops Show Up And Cook Pasta

If you woke up this morning hoping today would be the day a news story proves pasta truly does solve everything...

Well, first of all, I like where your head's at. We should be friends.

Second, someone answered your prayers.

The Questura di Roma (Italian State Police headquarters) Facebook account shared the heartwarming story of police comforting a lonely elderly couple by cooking them pasta, and if Roberto Benigni isn't already at work making a movie about this, I'm honestly disappointed in him.

Luckily for you, my parents paid for years of Italian classes just so I could translate this precious moment and remind you there is some good in this cold, carb-shaming world.

Here's how it went down, according to my loose translation of the dramatic (and incredibly well-written) Facebook post:

It was a hot summer night in Rome. The city was nearly empty, its citizens off on their seaside vacations. But Jole, 88, and Michele, 94, who have been married for about 70 years, were spending another night together at home when they turned on the news. Horrors of children being abused flickered across the screen. 'Why all the cruelty?' Jole pondered. Suddenly, grief took over. Life isn't always easy, and it had been too long since anyone paid the couple a visit. The solitude was weighing on their lonely hearts. They cried out with despair so loudly someone called the police. No, they weren't victims of a scam, like so many of the elderly. A thief hadn't entered their home. The officers had a much more complicated task before them: two lonely souls to save. Once they were inside, Jole and Michele told the police stories of their long life together. As they spoke, the officers noticed not much more than grapes on their kitchen table. They were overtaken with tenderness. They knew a little friendliness could go a long way. As they waited for an ambulance to arrive and check the couple's health, the officers asked for permission to go through the pantry. They were able to improvise a warm meal: pasta with butter and cheese. Nothing special, but with one precious ingredient: humanity. The officers left that night with two new friends and an important lesson: Always take the chance to help those in need.

Seriously, that was beautiful. Whoever wrote this post needs to quit immediately because his or her pure literary talent is being WASTED in that police station.

Gotta go weep softly into a giant bowl of pasta and then book my plane ticket to Italy. I have some people to visit.