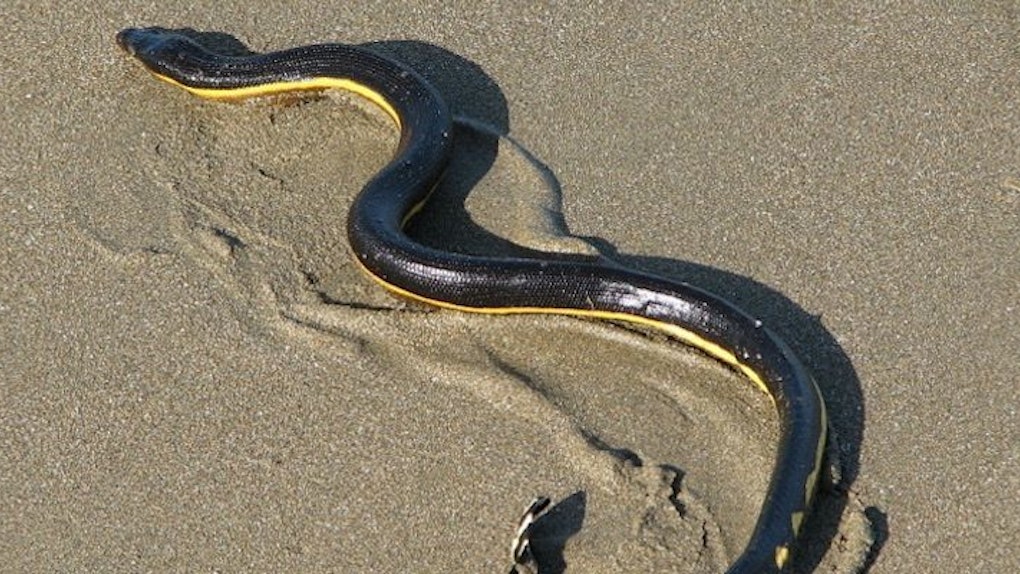 These Poisonous Snakes Are Washing Up On California's Beaches (Video)

It's El Niño season on the West Coast, and the uncharacteristically warm, wet weather has seriously screwed with Southern Californians' comfort and safety.

But few realized the scope of its power until this week when poisonous yellow-bellied sea snakes began washing ashore on California's beaches.

The snake, which is among the most poisonous in the world, is typically found in tropical waters. But because of El Niño and the oceanic heat wave that accompanies it, the snakes migrated to the Californian coasts for the first time in over 30 years, and the state is unprepared for the threat.

Robert Forbes was the first to spot the slithering sea serpent on Silver Strand beach in Oxnard, California. Since then, several others have made similar sightings, prompting Heal The Bay to issue a warning on Friday.

Heal The Bay's warning urges citizens to take caution and keep a distance when confronted by a yellow bellied sea snake. It also requested people make note of the exact location in which the serpent was spotted, so they can use the information for scientific data and research.

Check out a video of the slippery, slimy sea monster below.

Here is some video, they are dangerous and venomous, don't get close to them. Rescued this sea snake today on the beach here at Silverstrand in Oxnard. Prior to this there was only a report of them being seen as far north as Orange County. El Niño has definitely brought a lot of strange and unusual aquatic fish and animals up. Caution these snakes are venomous and should be avoided and not handled. And yes it is alive. Posted by Robert Forbes on Friday, October 16, 2015